The UK Riots and Capitalism's Decay

Parts of London are still burning after an enormous third night of riots, during which the flames have spread to Birmingham, Nottingham, Bristol and Liverpool. There is huge controversy over the conflagration, and the media establishment is doing its best to condemn, rather than try to understand. As a communist, this is not enough for me. These riots are the sudden bursting to the surface of social tensions that have been building up for many years - tensions that are rooted in the crisis of capitalism. 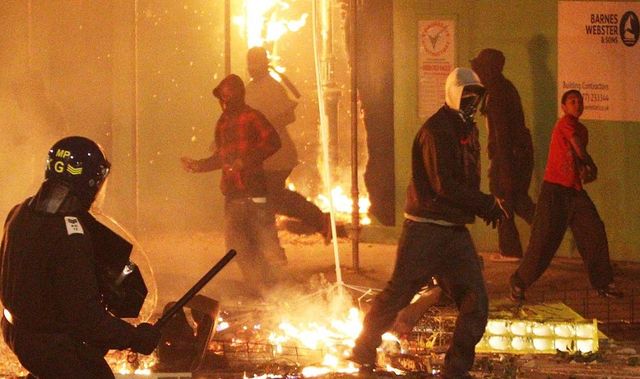 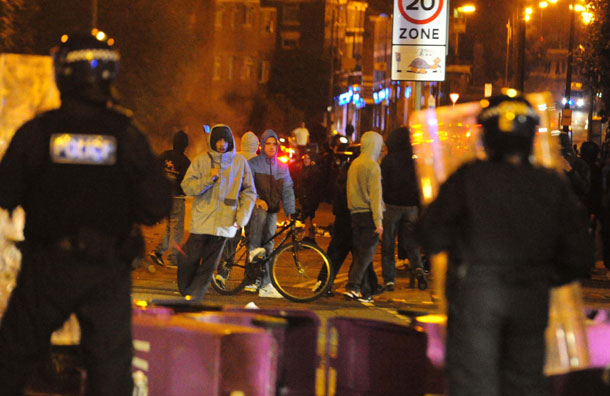 The Toxteth riots - thirty years on

Amongst all the TV footage of buildings engulfed in flames, it's easy to forget that those flames were sparked by bullets from police guns. Last Thursday, cops shot and killed Mark Duggan on the streets of Tottenham in North London. The nation's biggest armed gang - Metropolitan Police - claimed that Duggan had been a "gangster", and it was reported that an officer had been shot during the incident. It later emerged that the bullet had embedded in the cop's radio, and it was police issue. This added credence to eyewitness statements that Duggan had been pinned down when he was killed.

On Saturday night, friends and family of Duggan gathered at Tottenham police station, demanding answers. Cops then set upon a sixteen-year-old girl with batons, for reasons which remain unclear. The stage was set for a nocturnal showdown between an angry community and the agents of the state. The violence seemed to be the living embodiment of Martin Luther King's quote that "A riot is the language of the unheard."

That was day one. On day two, the idea of rioting appears to have spread by word of mouth and - of course these days - on Twitter and Facebook. Doubtless many of those rioting had the notion that they were settling old scores with the police. Others seem to have seized on the opportunity to loot shops while the police were distracted. This pattern spread yet further on day three. There were also reports of violence against people who had nothing to do with the police.

But those paragraphs only take us so far in understanding what happened. Like any major event these days, it has to be analysed in the context of the economic crisis, which was touched off by the ultra-rich, and their losses have been steadily passed down the food chain, with the poorest suffering most. As even a Daily Telegraph article admits, this socio-economic vandalism has created the conditions in which such tumult was certain to happen sooner or later.

Two weeks ago I a visited a small exhibition at Liverpool's International Slavery Museum, commemorating the Toxteth riots of 1981. Temporal distance had added understanding to the statements which lined the walls, though they went on to complacently claim that Liverpool was a very different place now. Last night, there was rioting in Toxteth's Upper Parliament Street once more.

But in a sense the exhibition blurb was right; Liverpool of 2011 is very different to the Liverpool of 1981. Back then we'd only had six years of the neoliberal assault. Now it's thirty-six. The latest crises of capitalism have created a generation of ghetto children with even less to lose.

The problem isn't that oppressed working class people are breaking the law en masse. The problem is that - justified anger at the police notwithstanding - so much of it is ostensibly 'apolitical', and many of the victims are entirely innocent politically speaking. As yet, there has been little leadership from the working class in the workplace. This apparently directionless outburst of rage and destruction is the inevitable result.