esterday, the streets of London were full of the rage of youth.

When I went out to photograph events, the situation was scary and volatile - but I met children who looked out for me, covering my back when I was using my camera, telling me when gangs and thieves were stalking me.

In the Hackney district of the city, the youth were intent on fighting the police. One boy told me that he was sick of being stopped and searched and that this was a settling of scores with the "Feds", as he called the police.

In 2009, Lord Carlile, reviewing police stop-and-search powers, found that Black and Asian youth in Britain were seven times more likely to be stopped and searched than whites.

Amid the volatile chaos on Monday night, criminal gangs took advantage of the situation. What self-respecting criminal gang would not? I saw a couple of 40-year-old white men heading into the middle of a stand-off between youngsters and police lines, carrying power tools and hammers. A bunch of boys were following, asking each other: "Are they are really going to do so-and-so's shop?" 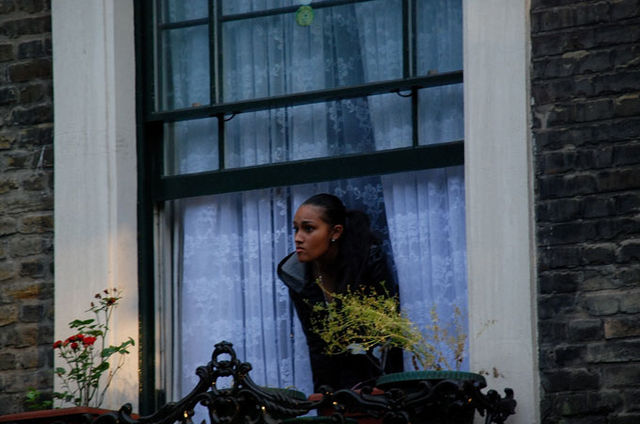 On Twitter late last night, following the main bulk of the riots, I was astonished at the incomprehension generally expressed as to why they had occurred. There seemed to be an extraordinary lack of awareness that working class youth in Britain are being punished for the financial excesses of the banking collapse.

The public spending cuts this year meant many of the youth summer schemes in London did not run. These riots suggest boredom - and inarticulate rage. The youth are smashing and grabbing the things society tells them to want.

The coalition government's austerity measures have hit this generation hard. There will be no higher education for those who cannot take on burdensome debt. The chance of ever being able to afford to buy a home in London seems remote - except for those whose wealthier parents can provide the deposit for a home loan.

A generation of young people have been left behind by this coalition's policies and the policies of previous governments. How can these young people see that they have anything invested in British society that will enable them to become fulfilled and successful adults?

The comments on Twitter and Facebook, following Monday's riots in London, starkly reflect the class divides within Britain today.

After spending much of the day deliberating over whether I should go and see what was happening, on Monday I set off on my bike with a stills camera. I cycled from my apartment in the East London borough of Tower Hamlets across Victoria Park toward the Borough of Hackney, to check out the scene. Would this just be a copycat riot that the police would quickly put down, or was it going to explode into something bigger?

Knowing that the local kids would not appreciate my taking the pictures mid-riot, I planned to get the aftermath shots: upturned, burned-out bins; trashed vehicles; local people wandering through the broken glass...

As I turned onto the main road I saw a red-faced man with a Union Jack flag tattooed on his forehead walking along with two women, drinking cans of beer. One said: "There were loads of masked up Asians swarming outside the Tube station, ready to riot." This man and women were drunk, seemed furious, spoke racist and walked scared.

Tweets warned cyclists to stay out of Hackney's London Fields park - on my route to the area where the riot was kicking off. Gangs, they warned, were robbing people and snatching their bikes.

In the past, gangs specialising in robbing bikes had often lain in wait in London Fields, but during the past decade, with the opening of bijou cafés and the weekly farmers' and arts and crafts markets, Hackney was getting "gentrified". These bike robberies had become less common. But yesterday, old times had returned.

The rocketing house prices and gentrification in East London have left young people in the area aware that they are unlikely ever to be able to afford to buy a home of their own in the area in which they grew up.

The British coalition government's introduction of what it laughably calls "affordable rents" means massive increases in rents for social housing, driving people from their homes and traditional areas into who-knows-which wasteland. In Hackney and Tower Hamlets, luxury apartments sit side-by-side with some of the poorest estates in the country. Raising rents to 80 per cent of the "market rent" of the private sector must mean massive increases.

Cycling up Morning Lane, I spotted the first burned-out rubbish bin. The road was scattered with rocks, broken bricks and dung from the police horses. The people walking by looked anxious and on edge. As I approached the junction onto Mare Street I saw four mounted policemen, a bus with a smashed windscreen, overturned bins and smashed plate glass splintered across the tarmac. .

The windows of JD Sports - purveyor of fine tracksuits, "hoodies" and trainers - had been smashed and were now guarded by four policemen in full riot gear behind a taped police line. Youths on bikes stood around chatting, resting their feet on upturned litter bins. Many people raised their mobile phones to get a shot of the trashed leisurewear shop.

The police stood there frowning. Two helicopters flew above, circling the area.

I met a friend, whose hobby is alternative internet projects and who works as a doctor, along with another journalist friend. Passers-by told us that there were burning police cars amid the social housing of the nearby "Pembury Estate" and that the roads were cordoned off. We rode on our bikes, seeking a way through the police cordon.

There were lines of police at the bottom of Pembury Road, on the junction with Lower Clapton Road. People leaned anxiously out of Victorian three-storey houses, their homes behind the taped police lines surrounded by police vans.

A young mixed-race girl of about seventeen leaned anxiously out of her front window, biting her lower lip.

In the distance I could see riot police in a stand-off. There was no getting a better shot from this angle.

We rode into the housing estate. Youths ran backwards and forwards excitedly in groups between the ages of 12 and 18, black and white, reflecting the ethnic mix that is East London.

In the distance, the police advanced and the younger boys ran back towards us. An older punky-looking man stood swigging from a large bottle of vodka, watching. A young lad asked: "Did you nick that vodka?" "No," he replied, winking. "I bought it." Then they all burst out laughing.

The most vulnerable hit hardest by financial crisis

More kids ran backward and forwards, not safe to get a picture here: we rode a little further north to Hackney Downs road, where police cars had allegedly been burned.

From there, we could see the youth hurling stones and cans. Behind us, more youth stood, poised and tense. The rage was tangible.

I raised my camera to take a long shot of the scene.

A lad came up to me and advised me not to get my camera out and to watch my bike because the gangs were out robbing bikes and cameras. "They'll smash your camera," he said. "A guy down there has already had his camera smashed."

Two police vans drove along the road, riot police emerged and ran towards the stand-off. As I ran forwards to get a shot, cobblestones flew over my head. The youth behind meant business.

As the sun set I left the area, remembering how, on March 1, 2011, Mervyn King, governor of the Bank of England, told members of parliament: "The price of this financial crisis is being borne by people who absolutely did not cause it." He said then that government spending cuts were the fault of the City and expressed surprise there had not been "more public anger".

People made unemployed and businesses bankrupted during the crisis had every reason, he said, to be resentful and to voice their protest. He told the MPs' Treasury Select Committee that the billions spent bailing out the banks and the need for public spending cuts were the fault of the financial services sector.

Asked when living standards enjoyed before the crisis would return, King said: "The research makes it clear that the impact of these crises lasts for many years. It is not like an ordinary recession, where you lose output and get it back quickly. We may not get the lost output back for very many years, if ever."

The situation is complex, with the cuts, the closure of services and the contempt in society for communities which are regularly referred to as the under-class - whose youth are now expressing their anger.