On the third day of rioting in London riots were being reported as spreading all over the capital with police resources being stretched to breaking point meaning they were unable to respond to all the incidents. It wasn’t until riots were reported in Birmingham however that it became clear that this was now a country wide issue and not just confined to London and, that the underlying issues causing the riots had gone beyond anger over the murder of Mark Duggan by armed police on Thursday. 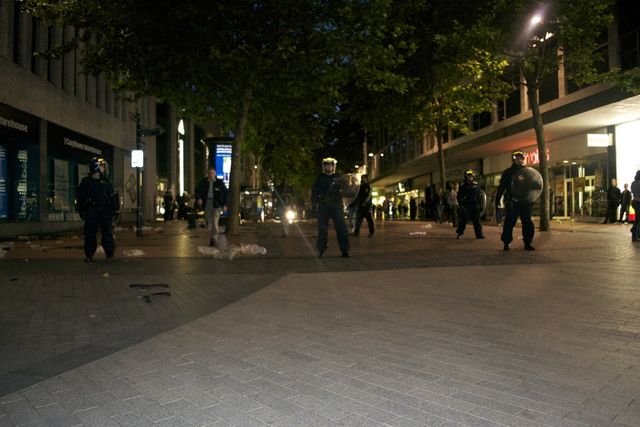 According to eyewitnesses interviewed in this film, the police closed down much of the city centre, harassed black youths and kettled large groups of people. This soon led to riots in the city centre when large groups of people started targeting and looting shops in Corporation St, New St, the Bullring and the Pallasades. Reports soon came of riots quickly spreading to other parts of Birmingham like Handsworth, Chelmsley Wood, Perry Barr, Aston, and Erdington.

The trouble escalated in Handsworth with cars being turned upside down and set on fire, widespread looting and fires on the Soho road including a Lloyds bank. This eventually led to local youths coming out to defend their community and local businesses from the rioters. There has been a lot of anger over the two recent deaths of black men in custody in Birmingham, so it was no surprise when the police station on Holyhead Road was targeted and set on fire.

The unrest continued for a second night with a van being set on fire near Moor Street Station, looting in the Custard Factory and reports of riots from all over the City and beyond including West Bromwich and Wolverhampton. The night ended in tragedy when three men Haroon Jahan 21, Shahzad Ali, 30, and Abdul Musavir 31 where killed after a car them hit on the Dudley Road in Winson Green as they where trying to defend their local community from the rioters. The mainstream media and politicians where quick to label the riots as mindless violence, opportunism and criminally organised, but its clear that the riots have more deep rooted causes. Just by looking at the areas the rioting took place, places like Handsworth and Winson Green, not exactly well off middle class areas, we can see that poverty plays a big part. When public services like youth centres and benefits start being cut these are the areas that feel the effects first. Add to that the constant bombardment of images and adverts of mobile phones, TVs, clothes and things that “you should have” but can’t afford then you can see why people might turn to looting. Although the causes of the riots were political i.e. poverty and police oppression this wasn’t a protest and the rioters weren’t doing it under any political banner. It wasn’t about anarchism or anti-capitalism and there didn’t seem to be any specific goals or aims. It was simply an expression of anger and unfocused rage, a sudden explosion of anger caused by issues that have been brewing under the surface for a long time. That’s not to say that this justifies the burning down of people’s houses, small business, mugging of people or the murders that took place. The three men who were killed in Winson Green had every right to try and defend their local community. The riots may have stopped but the underlying causes don’t look like they are going to be sorted anytime soon.