Surpassing previous mass media fabrications, both in scale and boldness, yesterday morning's Al Jazeera mise-en-scène will surely go down in history as one of the most cynical hoaxes committed by corporate media since the manipulated pictures of Iraqis topplying Saddam Hussein's statue after the US invasion in 2003. 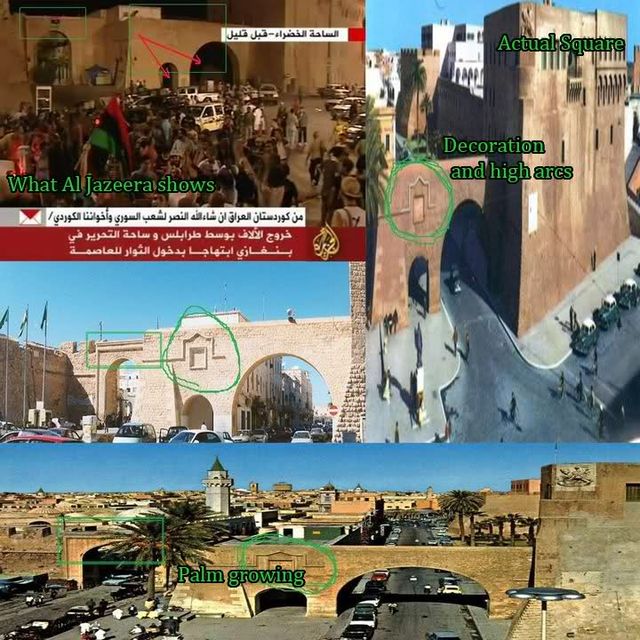 Fabricated scenes of jubilation and euphoria on Green Square, Tripoli, 22/08/11

The Libya media hoax: Fabricated scenes of jubilation and euphoria on Green Square


Surpassing previous mass media fabrications, both in scale and boldness, yesterday morning's Al Jazeera mise-en-scène will surely go down in history as one of the most cynical hoaxes committed by corporate media since the manipulated pictures of Iraqis topplying Saddam Hussein's statue after the US invasion in 2003.

On the morning of August 22nd 2011, Al Jazeera aired a 'live' report from Green Square in Tripoli,which claimed to show the capture of the Libyan capital by rebel forces. Scenes of jubilation and euphoria enveloped Al Jazeera's reporter Zeina Khodr as she declared: " Liya is in the hands of the opposition''

The images were immediately reproduced throughout the global media complex, with headlines trumpeting the 'end of the Gaddafi regime' and editorials throughout the corporate media world speculating about the post-Gaddafi future of Libya.

Gaddafi's sons were said to have been arrested, and more defections were announced. The Libyan capital was, we were told, now in the hands of the rebel forces. For many, it seemed a fait accompli.

In fact, the Al Jazeera pictures from Green Square were an elaborate and criminal hoax. The report had been prefabricated in a studio in Doha Qatar . This information had been passed onto Libyan intelligence and the Libyan people had already been warned about the qatari psyops a couple of days previously on Rayysse state television.

The Al Jazeera hoax was intended to create the impression that Tripoli had fallen so as:

(1) to break the Libyan resistance by creating panic and chaos in the Libyan captial.

(2) to provide cover for the massacres of civilians that would occur in the days following the declaration of rebel victory.

In other words, the media would provide cover for the war crimes and crimes against humanity that are necessary in order to subjugate the Libyan Jamhahirya to Western corporate interests.

By the end of the day, it emerged that all the twitter lies emanating from the criminals in the National Transitional Council were also, unsurprisingly, false. Gaddafi's sons had not been arrested, and the rebels were not in control of the city.

In the meantime, Lizzie Phelan, Mahdi Darius Nazemroaya and Thierry Meyssan have received veiled death threats from Western media staying in the Rixos Hotel in Tripoli. After the arrival of thousands of NATO/Al Qaeda terrorists, a brief period of chaos ensued in the city.

When many of the mainstream reporters abandoned the Rixos Hotel, Libyan authorities discovered that most of them were CIA and MI6 agents working undercover as journalists.

At present, Mahdi Darius Nazemroaya, Thierry Meysan and other real journalists remain trapped in the Rixos Hotel. Nazemroaya was fired upon by a NATO/rebel sniper when he attempted to place a press sign on top of the Rixos hotel to protect the building from NATO bombardement.

Reporter Lizzie Phelan contacted a friend yesterday to say that she had been threatened by CNN personnel and had been blocked from using facebook and email.

Below, you can see the warning given to the Libyan people by state media of Al Jazeera's coming psyops. The presenter tells the viewers that Al Jazeera have produced a simulation of Tripoli's Green Square, and that they are going to use this to produce a gigantic fiction of 'liberated' Libya.

While the Al Jazeera mise-en-scène is entertaining, the leading actress Zeina Khodr is unlikey to receive awards for her rather slugish performance. She said her lines rather mechanically, as one who was not particularly enamoured of the script, or perhaps it was the far-fetched aspect of the entire screen play that bothered her.

This media hoax is another poignant example of the desperation of NATO, who have ruthlessly bombed a sovereign nation for 6 months and have so far failed to effect regime change. It also proves yet again the role of the corporate media in disinformation and war-mongering.