Rossport – if Tuesday was not mad enough try today 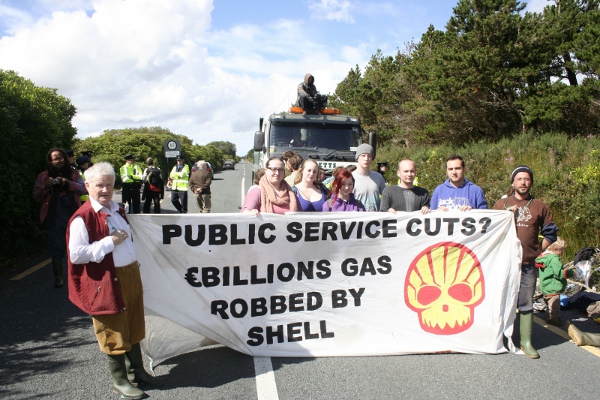 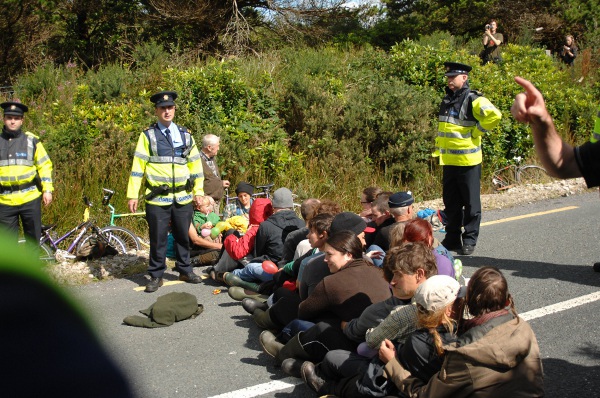 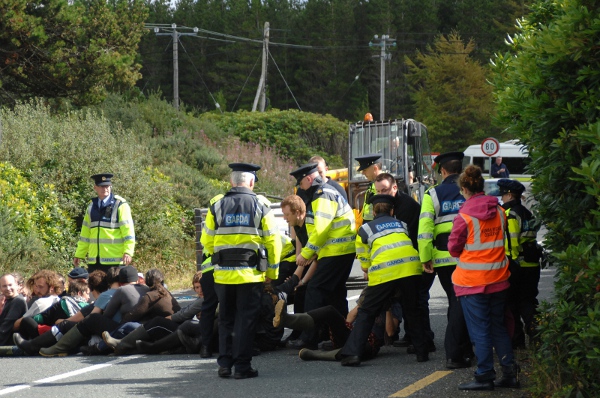 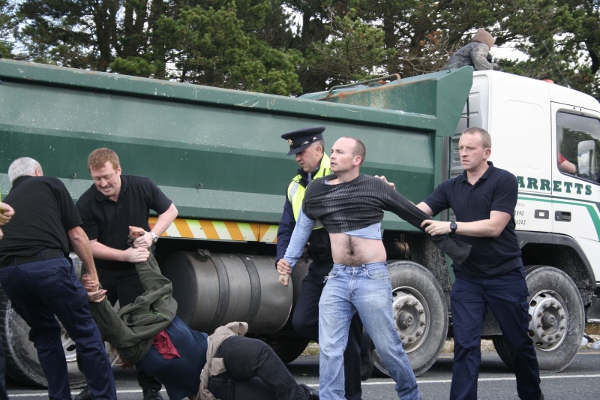 Paul Murphy being carried away 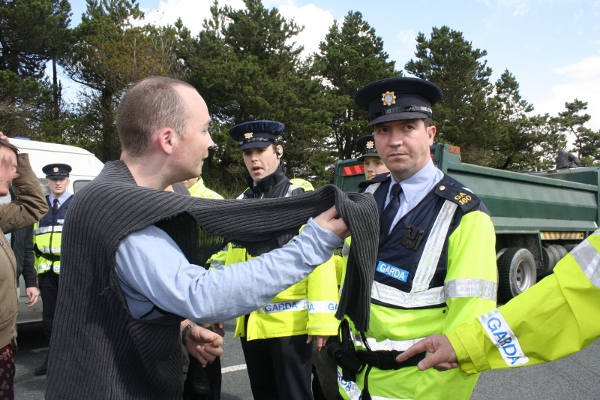 Local Shell to Sea campaigners and their supporters at Rossport
Solidarity Camp are resting after another bizarre day of lows, highs
and outright idiocy during their ongoing protest against Shell in co. Mayo.
The day started unpromisingly with a 6am sortie against the compound at
Aghoos seeking to exploit a couple of weak points in the fence. Shell's
contractors Roadbridge and Shevlins are racing to finish the first bit
of work in constructing the fencing and new entrance way. Every moment
is counting for them. This left a couple of promising gaps which people
from the camp sought to exploit in their dawn raid.

Unfortunately, it was not to be. Security from IRMS were aggressive from
the beginning and were dragging people across hard-core and the road.
Though the main target failed, a secondary one saw two people get in. As
other weak points were probed, one protester who was on the road was
deliberately charged from behind, tripping them face-first onto the road.
This was all photographed; a complaint to a Sergeant imported from
Galway was naturally treated with disdain, the gardaí happily taking
their place as part of Shell's private security. This has already been
reported to the Amnesty/Frontline human rights observer in the area and
will be pursued.

People returned to camp to get a bit of rest and recuperate. Just before
midday, Dublin MEP Paul Murphy (of the Socialist Party) and a number of
supporters turned up. They were shown the camp and given an update as to
how the campaign has been going.

While this was happening a group of people waited near the junction near
Glenamoy, a key turning point for the vehicles coming between the
refinery at Bellinaboy and the Aghoos compound. Most trucks and tractors
along this route are escorted by gardaí, who have placed officers along
this route, and whose vans regularly follow people walking it.

Despite all this attention from gardaí, quick thinking meant that one
person was able to jump on top of a Barretts Quarry truck – the firm
providing much of the hard-core – at around 1pm. It was a beautiful
moment. Campers, locals, Paul Murphy & co all converged on the site. A
good natured protest ensued, with people laughing, joking, singing,
children making water balloons and the person on top of the truck giving
us a rendition of “Which Side Are You On”, re-worded to take in Shell.

In the refinery a backlog of trucks and other vehicles began to build
up. The public order team turned up with their cherry picker to remove
the person on top of the truck. Those in the road sat down and formed
two lines wrapping arms and legs around each other with the aim of
stopping the cherry-picker coming in. The thugs from the public order
team waded in, as ever, dragging people out, ripping clothing and using
pressure points on the ear. Paul Murphy, who was involved in the line
was among those assaulted in this fashion. Naturally he was livid. Word
is that the story is going 'viral'.

Not to be deterred, after the person on the truck was removed and
arrested, people decamped to the front of the refinery. Numbers
continued to swell as more locals came to support. It was fantastic to
see old faces again, something that really boosted the campers.
It was clear there was a buzz despite the rain that came on. There was
more playing in front of the gates, and a determination to resist in the
air. For those who had been at the morning protest, it was such a lift.
Gardaí and security stayed clear; the line of trucks backed up inside
the refinery grew longer. The person who had been arrested was released,
charged and came to join the protest.

Eventually Shell caved in. They parked up the trucks and shut up shop at
Aghoos at 6.30pm. Though having pushed their workers to keep to the
existing timetable, the day was lost to the campaigners.

Fearing that they might try and take some of the vehicles out the back
gate, people drove around, driving up close to the back gate. Two of
these cars driven by locals (well known to security) and containing just
as recognisable people were waved through the refinery gates by
security. So, we suspect, heads are going to roll. One car drove around
and back out again without security actually being aware of this. The
other stayed in and drove around the refinery, two fingers up to all who
think they can run rough-shod over the people of Erris. Naturally, the
gardaí, late to the party this time, then began stopping workers going in.
It was a great turn around to a long day. Now, for another planning
meeting...

I was just about to finish this report when we heard... two IRMS (the
security firm) minibuses were blocked for an hour. And the car was
still in the refinery as of 8pm. So down we head again, barely finishing
dinner. Security had surrounded the car at the inner perimeter fence as
it was trying to leave. For some very bizarre reason they would not let
the car leave by the gate directly in front of it, but wanted it to go
all the way to the back gate.

The occupants refused that option as they were worried they would be
ambushed. A tractor was brought and attached to the back of the car by a
rope. For the next hour and a half the car was bounced backwards across
the site. The idiocy of the people doing this meant that the car was
constantly bouncing and knocking against the back of the tractor. Once
occupant phoned the gardaí for help but the person answering the 999
call laughed. It is not hard to see why the gardaí in Erris are not
trusted by the people who live there.

By 9pm a crowd of locals and people from the camp had assembled outside
the back gate in support. Numbers swelled to forty by 10pm when the
tractor finally brought the car out - gardaí and security filled out
into the road - the security clearly acting like cops again - pushing
concerned friends and family away. It was a relief to see our friends
safely again.

A long, exhausting day, but amazing in so many unexpected ways. Welcome
to Mayo.

Sounds fantastic. Hope people aren't too battered and bruised...If people can sustain this energy I don't see how Shell can continue :)