The European conservation organisation The Black Fish and the Belgian organisation How To Save The Bluefin have merged as of today in an effort to build a stronger alliance in the fight against bluefin tuna overfishing. The two organisations will continue together as one under the banner of The Black Fish. Diederik Jeangout and Michael Dilissen of How To Save The Bluefin are happy with the move: "Bluefin tuna needs our attention and we are serious about achieving real change for this endangered fish. We need to build a stronger movement to create the necessary change and we feel that within The Black Fish we can make this happen". 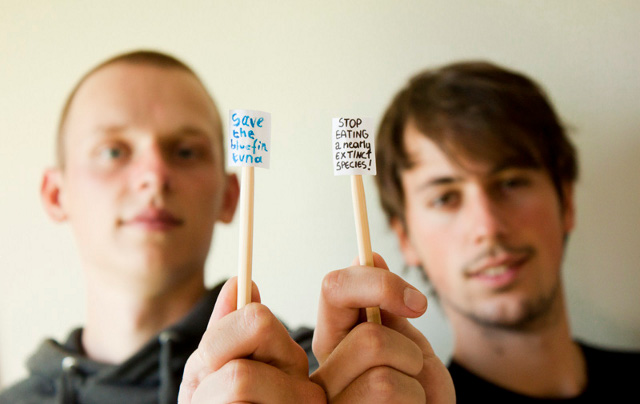 Diederik Jeangout and Michael Dilissen of How To Save The Bluefin

How To Save The Bluefin was set up in Antwerp, Belgium, in the autumn of 2010 and has run a variety of campaigns to raise awareness of the demise of the bluefin tuna. An animation was made to explain the bluefin tuna issue which was translated in six languages and gathered a lot of media attention. The organisation went on to meet with local councils in several Belgian cities to discuss the ongoing sale of bluefin tuna meat and a project called Chopstick Guerilla saw activists attaching protest messages to chopsticks at local sushi and seafood restaurants.

The Black Fish is a conservation organisation focused on investigation and grassroots campaigning in an effort to create better understanding and protection for Europe's threatened marine habitat and species. The organisation booked a number of successes in recent months in campaigning for marine mammals in captivity. The organisation's focus is now switching towards damaging industrial fishing activity and European whaling.

"It is important that the bluefin tuna gets better protection. The fact that a fish this threatened is still sold in cities across Europe asks for action. We welcome the people from How To Save The Bluefin to help make this happen. This move is evidence of the growing movement of people that wish to protect our seas from the dangers of overfishing" according to Wietse van der Werf, spokesperson for The Black Fish.