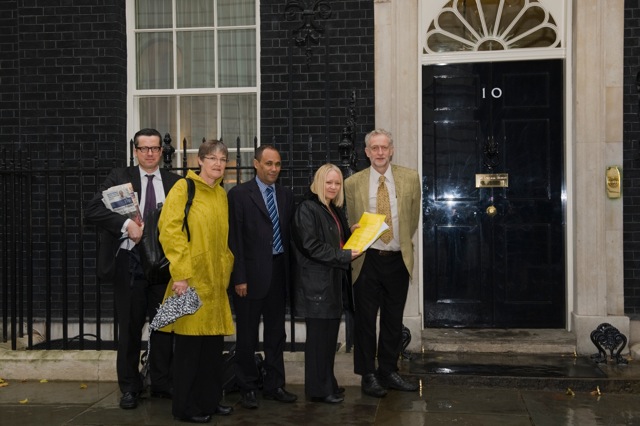 On Tuesday 6th September, exactly 20 years after the signing of a UN ceasefire agreement MPs, campaigners and a former senior British diplomat delivered a letter to the British Prime Minister calling on Britain to use her role within the UN Security Council to help enforce the terms of the ceasefire and hold a referendum on self-determination in Western Sahara. The letter includes the signature of former UN special representative in Western Sahara who resigned his post in 2006 in protest at UN inaction on the issue.

The UN negotiated-ceasefire agreement signed in 1991 brought to an end 16 years of fighting between the Polisario Front and Moroccan forces who had unlawfully annexed the territory in 1976. Under the terms of the ceasefire a referendum on self-determination was promised. Twenty years later it has yet to be carried out. In the meantime over 100,000 Saharawi continue to live in refugee camps in the Algerian desert whilst the rest of the population suffer under an unlawful occupation.

The letter was delivered by a delegatation led by Jermey Corbyn MP and Cathy Jamieson MP and included former diplomat reponsible for Britain’s policy on the Western Sahara at the UN, Carne Ross. The letter will also raise the issue of human rights abuses suffered by Saharawi’s in the occupied territories.

After the delegation, there was a public meeting in the Palace of Westminster – Western Sahara and the Arab Spring – where leading academics and experts discussed the impact that the democracy reform movements sweeping the region might have on this “forgotten conflict”.

Dr Catriona Drew, lecturer in international law at the School of African and Oriental Studies, set out the situation in terms of international legality stressing the fact that the people of Western Sahara, classified by the UN as a non-self-governing territory, have an inalienable right to self-determination. The right of self-determination was defined by the International Court of Justice in its Advisory Opinion on Western Sahara in 1975 as the right of a people to exercise a free choice over its political and territorial destiny. It could not, she said, be satisfied by any process or negotiations that fell short of offering the Western Saharans a free choice over their future that included the option of independent statehood. Morocco's offer of autonomy could only comply with international law if it was one of a range of options put to the Western Saharans in a ballot.

Paul Whiteway of Independent Diplomat sounded a positive note: “If the Arab Spring has taught us anything, it is that the voice of a strong-willed people is difficult to suppress and this is not lost on the Saharawi people, whose struggle represents one of the greatest injustices of the post-colonial world” he said. “With elections in the pipeline in several North African countries, perhaps a referendum for the Saharawi people is not so unlikely after all.”

Cathy Jamieson MP: “With the Arab Spring reshaping the political landscape of the region now is the time for the UN Security Council to fulfil its obligation to enforce international law in Western Sahara. On this, the 20th anniversary of the 1991 ceasefire agreement, we call on David Cameron to increase efforts to ensure that the agreed referendum on self-determination is carried out. Twenty years is too long but it is not too late for international law to be applied and a peaceful resolution brought to this conflict.”

Jeremy Corbyn MP said: “After 36 years the injustice goes on; the people of the Western Sahara are denied their basic legal right to their own self determination and right of return home. Instead most of the rest of the world looks the other way whilst they remain in refugee camps and their fish and minerals are exploited. Time to wake up and act.”