The launch of, Life Neutral Solutions a new company at DSEi 2011, raised some controversy.

Advertised on a billboard near the Excel Centre which hosted the Defence & Security Equipment International, billed as the world's largest Arms Fair, the company wrote on its website:

You’ve heard of the importance of being carbon neutral? Well, being Life Neutral is the same - but with people. For every* life lost as a result of the use of products from our member organisations, we make sure that a new life flourishes. Join today and your next child could be a Life Neutral™ child. 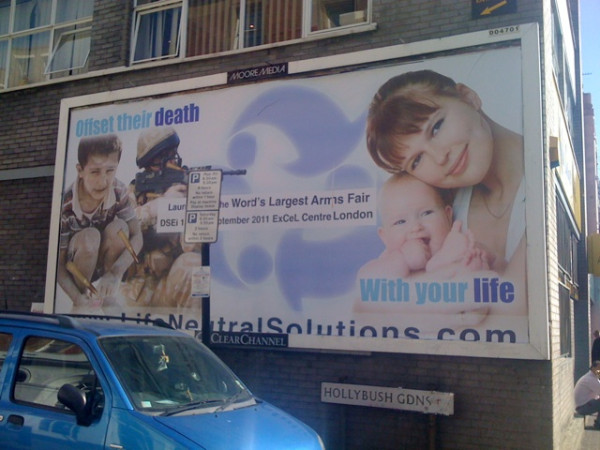 There was a bit of a stir on Twitter and some heated debate about the concept. This morning the BBC World Service invited Life Neutral into their studios, where the company was unmasked as a protest against the Arms Fair. On their Twitter Feed, Space Hijackers,and later on their website the group that took a tank to DSEi 2007 took responsibility for the stunt.