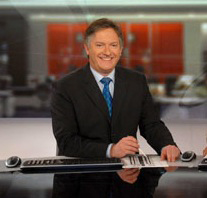 In a shameful act of political censorship, at 10:13 this morning BBC News 24 anchor Simon McCoy cut off a representative of the Dale Farm action group mid-sentence when she tried to talk about the bailiff's company having a reputation for violence, and bailiffs having broken travellers' arms etc at previous evictions etc.

Simon McCoy interrupted the speaker mid-sentence, and said these were claims "the BBC can't verify" - the BBC don't have to verify them as they were being made by an interviewee and not by the BBC themselves, and then the interview went dead. In contrast to this sudden passion for verifiable facts, the BBC have constantly reported that Dale Farm residents built homes without planning permission, when in fact it turns out 50% of Dale Farm residents DO have planning permission to build on what is, in all cases, their own land, and land that was a former scrap yard as well.

Meanwhile the BBC News 24 has widely reported 3 people being arrested after a banner drop outside the Lib Dem conference, but confined all reports of the 1,500 people who marched against Lib Dem treachery to a few lines on the BBC website.