While travellers and protestors warned the world's media of the threatened assault on Dale Farm by Basildon Council's bailiffs, Mr Justice Edwards-Stuart granted an injunction to delay the eviction 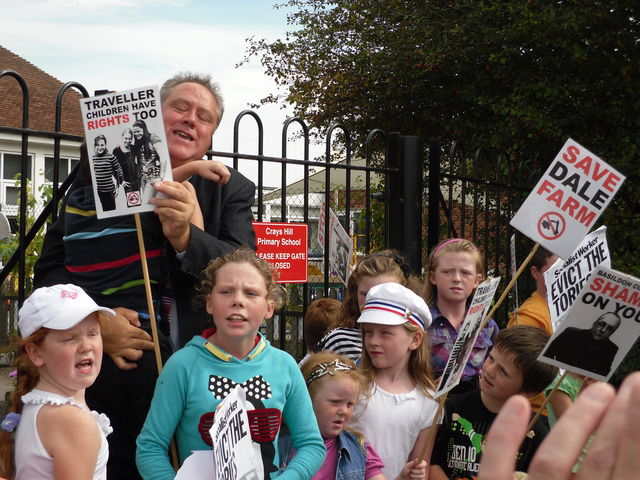 Hundreds of travellers expected to be attacked by bailiffs today. Hundreds of sympathisers joined them in the defence of the site. With the world's media watching, Basildon Council Chief, Tony Ball said he would go ahead with the threatened eviction.

Instead the High Court gave the Travellers a stay of execution, worried that the Council's bailiffs were likely to overreach the injunction. At Dale Farm, Travellers and their supporters cheered the news that Tory Ball was not to have his day.

Edwards-Stuart's ruling shows that the powers-that-be have blinked, but it is only a stay of execution, not yet a victory. No doubt the authorities are alarmed at the bad publicity the eviction has garnered. Shades of the Third Reich can be seen in the policy of persecuting Gypsies. It was a policy that puts Britain alongside the East European regimes of Slovakia and Rumania.

Settled families in Basildon have been priced out of the housing market, and their children face climbing rents, or shared tenancies into their thirties. Far from seeing the Dale Farm settlement as a problem, it should be welcomed as an example of how we can solve the housing shortage for ourselves.

There should be protests outside the High Court this Friday, The Strand, Charing Cross Underground.