We have a dream: towards a Euro-Mediterranean social strike

This text was written by Madrilonia, a Madrid-based blog that writes about and participates in social movements. Madrilonia has been involved in the 15-M movement, which began with the mass protest organized by Real Democracy Now on the 15th of May 2011 and inspired Europe with the occupation of plazas across Spain. This text imagines a new form of strike across Europe and the Euro-Mediterranean region, a strike which is up to the task of confronting contemporary forms of exploitation and control. 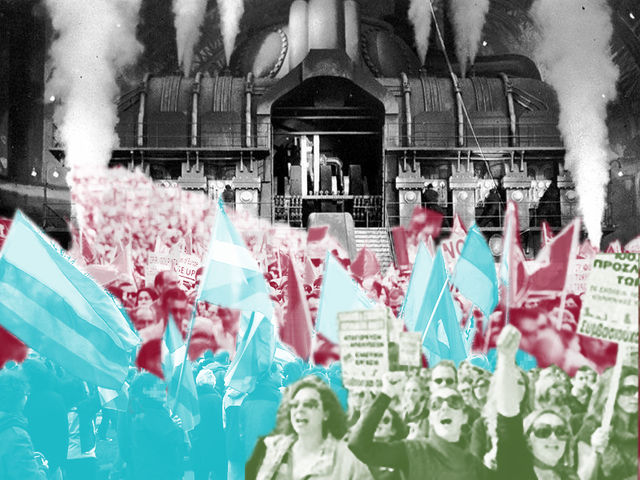 Here at Madrilonia we recently woke up with an inspiring dream: a vision of the Euro-Mediterranean region paralyzed at the level of re-production and inserted in a process of irreversible change, a dream that might just awaken us from an apparently endless neo-liberal nightmare. This dream, still cloudy, poses new questions and suggests new answers with respect to the increasing plausibility that the 15-M movement and the grassroots trade unions call a general strike in the coming months.

Now that our movement has overcome public opinion, taken the streets, and articulated, via assemblies, an incipient counter-power, we can begin to imagine the opening up of yet untraveled paths. On these paths we will find, as we walk, the fundamental importance of a dream governed by our collective unconscious, by that common sense (or sense of the common) which has served us so well until now. Dreams don’t allow us to see or feel with the same clarity as the cold light of reality, but they do allow us to enter, without fear, into the unknown, wherein we confront something as simple, yet definitive, as waking up.

If we decide to dream collectively and journey together in the unknown, we might just redefine the limits of the possible. To those who tell us that a Euro-Mediterranean strike is impossible, we respond that the path that has led us this far is made of such impossible dreams: taking the squares (Tahrir, Sol, Syntagma), creating virtual networks of collective intelligence, stopping evictions, assemblies in our neighborhoods, sit-ins, mass demonstrations, etc.

The question isn’t whether or not we can do it. The question is how to make it happen: how to turn this dream into a reality? The best way of beginning that process is to ask better questions: what will this strike look like?

Strike: Many questions confront us here and they represent major challenges. How might we construct the collective force necessary to interrupt the economy in the context we live in? Let’s forget those old images which have nothing to do with our lives. There are almost no big factories left. The assembly lines are gone. You don’t see many blue-overalls these days. In short, there’s no heavy industry. But there are public sector workers whose jobs grow more precarious every day; huge transnational service sector companies; networks of small sub-contracting enterprises; ‘freelance’ work with no security; hyper-exploited migrants; invisible workers in the home; the third sector; privatization; and a long etc.

Our social strike won’t be just about those we consider ‘traditional workers’ (although we hope they’ll join us), it will be about everyone. That’s what will make it a social strike.

Social: How can the unemployed go on strike? Or a community worker? Or a nurse? And what about a street-merchant in Cairo? How can we completely block production in a city or even in an international region? Fortunately, we have experiences which help to organize the phases of our dream (although these experiences don’t answer all our questions). Our experiences range from the road-blocking which shut down Buenos Aires in 2001 and the subsequent land occupations to the student mobilizations in Italy and the UK in 2010, from the hacker attacks against the Sinde Act [1] to imagined but-not-yet-realized care-worker strikes or mortgage and rent strikes.

This is a Euro-Mediterranean strike which would paralyze or permanently reduce consumption in strategic sectors (transport, energy, etc.); which would return to collective ownership all that is being stolen from us, defending health care and education; which fights for free access to common resources and for the collective management of those resources against privatization. This is a social strike that would disturb the markets with constant attacks against the financial system (withdrawal of deposits, actions against the stock market); that would undermine the corporate media; send a message to the political class; and which takes back land, buildings and housing for social uses. Not a bad panorama.

Euro-Mediterranean: How can we even think about resisting the Europact without conflict on a European level? How can we challenge financial speculation without constructing a territory of struggle as wide as the territory of capital itself? How can we break with the exploitation by Europe of the southern Mediterranean countries, which are used as a cheap workforce and a source of energy, and where companies locate to benefit from reduced costs? How to eliminate the militarized border that stops the ‘threat’ sub-Saharan migrants pose to our ‘ideal’ welfare systems in Europe? How can we build real solidarity with our sisters and brothers in rebellion, from Greece to Egypt, without constructing moments of common conflict? The day of the French strike, the Spanish strike, or the Egyptian strike are over. We are immersed in shared problems and networks of exploitation, but we also have tools, organizational capacity and common interests that define our possibilities of attack and resistance.

The task is to change the scale, to transcend the national and ‘traditional worker’ identity of the strike in order to move forward in a new cycle of mobilizations. It is necessary to make clear to the EU institutions their responsibility in relation to the debt crisis. But we also have to put a stop to the complicity of Europe with countries that massacre their own populations. Only the response of our diverse Euro-Mediterranean societies can derail the policies and the politics which are pushing both sides of the Mediterranean towards disaster.

The movement must go on!

[1] The Sinde Act reinforces Intellectual Property and copyright laws in Spain and has been subject to widespread resistance.