Actions against drones at Parc Aberporth, Newcastle Emlyn and Carmarthen to mark International Day of Peace in Wales. 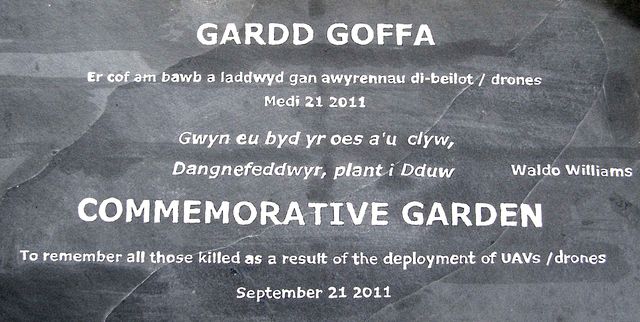 Plaque for commemorative garden dedicated to victims of drones 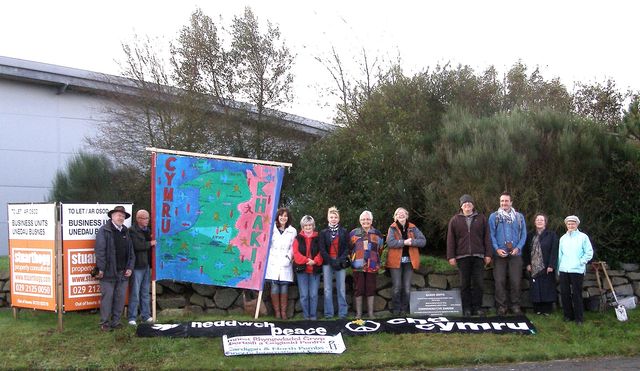 and at Newcastle Emlyn

Yesterday, Wednesday 21 September, anti-war activists in Wales established a commemorative garden at Parc Aberporth to remember the victims of unmanned aerial vehicles (UAVs), otherwise known as drones. Parc Aberporth was developed with at least £21 million of taxpayers' money to create a so-called 'Centre of Excellence' for drones. Qinetic is the only company now renting business space on the parc, testing an Israeli designed 'Watchkeeper' (formerly 'Hermes') drone owned by the MoD for use with spying and targeting over Afghanistan and other war zones. Since July 28th, a permanent segregated airspace around Parc Aberporth allows frequent testing of unmanned aircraft across Carmarthenshire, Ceredigion, Powys and part of North Pembrokeshire with flights between Aberporth and military training ranges on Mynydd Epynt, an area controlled by the military since 1940 when over 200 people of Epynt living on over 50 farms were evicted from their land by the War Ministry.

From the CND Cymru press release:

"Many people are deeply concerned that UAV/drone remote killing machines being developed in our communities are causing death and misery in other communities elsewhere in the world. The Israeli designed ‘Watchkeeper’ is being developed at Aberporth and in the skies over Wales on behalf of the British army. These ‘Watchkeepers’ are for surveillance, spying and identifying targets for weapon strikes. At Aberporth this morning, a young oak tree grown from an acorn from around the Llywelyn Monument at Cilmeri in Powys, was planted in the new Commemorative Garden.

"By invitation, talks are now being given in local schools. The group will be met in Carmarthen by school children amongst others this afternoon. Carmarthen Town Council will raise the Peace Flag over the Town Hall, and there will be opportunities to sign a new and wonderful ‘White Book of Carmarthen’ for Peace."