Ever since us Europeans were able to, we have sent our fishing vessels to go far beyond our own shores and catch fish the world over. With an increasing market demand for cheap fish and overfishing problems in our region we needed to look elsewhere. Now what would be easier than to fish in the waters of developing nations which have little option but to accept little incentives, such as extra humanitarian aid, in exchange for the over-exploitation of their waters? 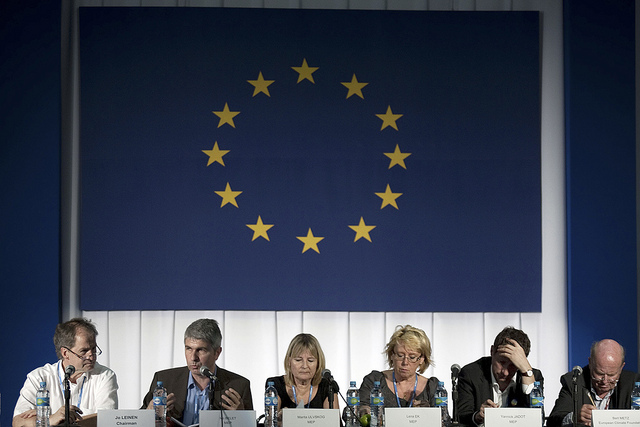 Fishermen from western nations have been fishing all over the world for centuries but it wasn't until various international fishing disputes in the 1970's that things changed. The rules on the extend of territorial waters were adapted and resulted in the introduction of the 200 mile exclusive economic zones in the early 1980's. This meant that suddenly one needed to get a nation's permission in order to fish in their waters, where these were previously exploited unchallenged. Many fishing rights to fisheries outside the EU were now lost and new deals had to be negotiated.

In recent years, under the watchful eye of the General Agreement on Tariffs and Trade (GATT) and the World Trade Organisation (WTO), these agreements became known as Fisheries Partnership Agreements (FPA's) and grew to become as controversial as plentiful. There was no way that small scale artisan fishing communities could size up to the large industrial fishing fleets which were now coming from Europe, over-exploiting the local fish populations in order to meet the ever-increasing demand for cheap fish on the Western markets. Local fishermen were pushed out of the market, even to such an extend that Ghana, a West African country, is now heavily reliant on imports from the EU market, because EU fishing companies are emptying their waters.

Various organisations have campaigned on this issue, for environmental and in many cases, social justice reasons. With little known about the details in the fishing agreements themselves, it has been difficult to point out the immoral and irresponsible behaviour of various institutions, most notably the European Union. However, this is now slowly changing as one organisation has managed to break open the secrecy surrounding these agreements.

Andre Standing of the group Transparent Sea has been pressuring the European Commission to make the documents public, based on obligations as set out in the Aarhus Convention, which gives the public access rights to certain otherwise classified information, and with success. Recently 16 documents were handed over and uncovered some interesting details. Standing: "These documents are very interesting. Of particular interest is information showing that EU funds paid through FPA's have been misappropriated in some countries, and the Commission is fully aware of this. For example, one 2005 evaluation noted that some EU fishing companies were paying license fees into the private bank account of a fisheries minister - the report suggested that due to corruption the idea of a partnership was unrealistic. Several other evaluations allude to similar problems, including misreporting catch data by EU vessels."

No doubt there is a lot more controversy to uncover from the dusty filing cabinets at the European Commission regarding the shady fishing deals. The fact that a limited number of these files have now been made accessible has opened a door which has so far been firmly shut. With an increasing interest in these issues, pressure on the European Commission is growing and not just from within the European Parliament.

Standing notices there is a lot of interest in the issue: "I think the documents provide very useful data on industrial fisheries in Africa, and should be a valuable resource for people undertaking research and advocacy on fisheries. My webpage received many hits in the first week of the documents going online, so many people are interested in reading them."

Campaigners are now working to ensure the rest of the documents are handed over: "We are now trying to put more pressure on the Commission to agree on a specific date when this will be resolved, otherwise we will revert to a formal legal application."

The Black Fish fully supports the work of Transparent Sea and will, where possible, aid any future uncovering of Europe's dirty fishering operations in the waters of developing nations.