American soldier admits to thrill kill in Afghanistan .... An US soldier admitted to a judge yesterday that it was a “bad decision” to fire a machine gun at an unarmed teenager while serving in Afghanistan in 2010. Private Andrew Holmes, 21, pled guilty to the murder of a civilian yesterday, a year after initially proclaiming his innocence. Speaking in a military courtroom outside of Seattle, Washington on Thursday, Holmes took responsibility for the killing and also admitted to drug use and keeping a finger from the victim as a souvenir. 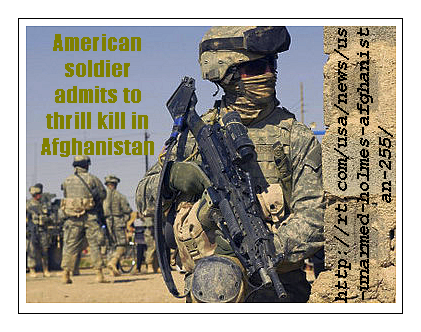 The case may not ever have progressed to this point had Holmes not posed in front of the slain 15-year-old boy, mugging for the camera while holding up the head of the dead teenager.

Holmes said he used a heavy machine gun to shoot “six to eight rounds at the man,” but added that he has “regretted it ever since.”

“I remember when this whole thing down and they pulled his dad and his brother down there and they were sitting there looking at their son and brother and he was on the ground. It was a terrible thing. I wish I could have done things different, I wish I would have had time to process what was actually going on. There was a lot of confusion that day,” says Holmes, reports KPLU News. ..... M O R E:

http://rt.com/usa/news/us-unarmed-holmes-afghanistan-255/b ........ Five soldiers in all from the Army's Joint Base Lewis-McChord have been charged with participating in three “thrill kills” in Afghanistan from last year. Cpl. Jeremy Morlock pled to three counts of premeditated murder earlier this year and as a result was sentenced to 24 years behind bars.

By pleading guilty to the crime of unpremeditated murder, Holmes worked out a deal with prosecutors that will spare from him receiving a sentence of life in prison. Staff Sergeant Calvin Gibbs, who is being considered by court-martials as the “ringleader” of the January 2010 incident, still stands to face trial. He is expected to go before a judge in November.