The rebellious anarchist magazine is back with another 92 pages of resistance and revolution to keep you ticking. D.I.Y and not for profit, this magazine aims to be a voice from the uncontrollables. 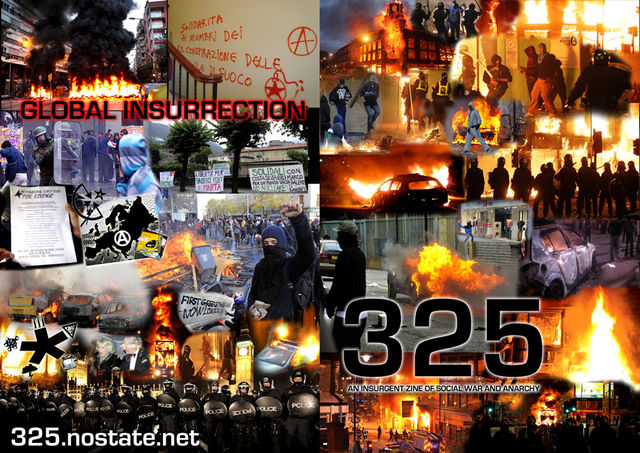 325 has long provided a platform for prisoners and anarchist/autonomous groups/individuals to communicate, and we’re proud to present this latest issue, as we received a lot of new inputs and efforts. The global network of solidarity and direct action spreads and multiplies – this magazine is only a glimpse of it.

A large selection of texts received from UK sets off the riot of info contained within this edition, and we give space to cover, amongst other subjects; the repressive anti-anarchist crack-down in Italy this year; lengthy insightful open letters and uncompromising statements from Greek anarchist prisoners of the Conspiracy of Cells of Fire and their accused; several articles form themed sections concerning Germany, Indonesia, and Chile etc. Whilst Philippines, Mexico and Russia also have a presence. A selection of poetic columns from Argentinian anarchist Rodolfo Gonzalez Pacheco, and the usual International Resistance News and Brief Global Reports make up the regular features.

The world-wide anarchic revolutionary insurrectional current could never be summed up in pages alone and grows day-by-day beyond our capability to report it. Consider these texts and images as contributions to an ongoing process of revolutionary solidarity and struggle.

Free PDF download and paper version directly available from 325 for suggested £2.5 / €3 suggested soli-donation per issue (postage extra), or pick it up from any decent anarchist distro which stocks it. Free copies available to prisoners (if they can receive it). Any money generated will be put into the 325 network and given to the funds of anarchist, eco & class-struggle prisoners.

As the crow flies… the jackanory never stops… This issue is dedicated to the memory of Gary DS & Casey. OG DSG RIP (Riot in Peace).

- For Riotous Assemblies not Reasonable Dissent
- Letter from Anarchist/Antifascist Prisoner Thomas Blak
- The Struggle Against the Existent Continues
- To address moral elitism within the anarchist milieu in response to the rioters of August 6th onwards…
- Incitement to Burn
- Beyond the ‘Movement’ – Anarchy!
- Against the British ‘anti-capitalist movement’: Brief notes on their ongoing failure
- To act without outside authorisation, clearance or a big pat on the back from the movement
- ‘Rain & Fire’ by UK sector of FAI
- A few notes on recent repressive attacks against anarchists in Italy
- To believe, to obey and to work
- ‘Direct Action’ by Rodolfo Gonzalez Pacheco
- About the case of Silvia, Costas & Billy
- About Solidarity
- About the “Conspiracy of Cells of Fire” case
- P.Argyrou – Statement to the Court
- Cells of Fire are Our Souls
- Political Statement of P.Masouras
- ‘DO NOT SAY THAT WE ARE FEW’ by FAI
- Mass sabotage in Berlin
- Sketches of the last few years anti-militarist praxis in Germany
- ‘There is nothing to reform’ by Gabriel Pombo da Silva
- Liebig 14 Evicted
- Solidarity with Chilean Struggle
- ‘With the Rebels…’ by Rodolfo Gonzalez Pacheco
- Tortuga Presente! Active Solidarity with Luciano!
- News from the Social War in Sulawesi and Java – Indonesia