Stop deportation of Nadia Habib and her mother, Nazmin Habib 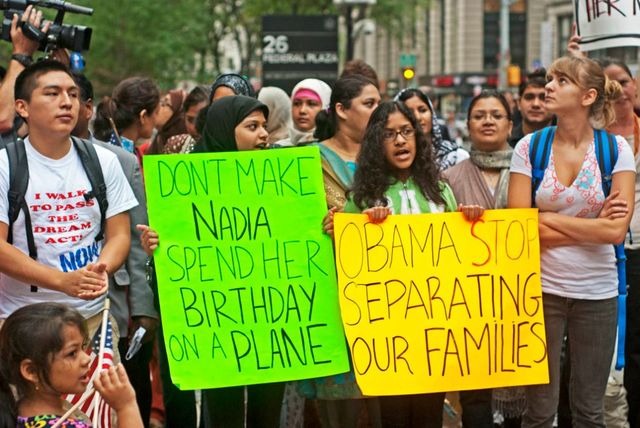 Stop Nadia’s and Her Mother’s Deportation

RE: Stop deportation of Nadia Habib and her mother, Nazmin Habib

I am William Nicholas Gomes, a human rights activist and journalist. I welcome your desire that you have expressed recently to visit Bangladesh during a brief conversation with Prime Minister Sheikh Hasina in New York.

The international community, and the United States in particular, has invested significantly in the issues of regime change and socio –economic issues of Bangladesh , to ensure stability, peace, disarmament, and the prevention of further violence and human rights abuses.

At this time I want to share a famous saying of US black civil rights leader & clergyman, Martin Luther King Jr. in a letter from Birmingham Jail, April 16, 1963 in which he wrote “Injustice anywhere is a threat to justice everywhere”

I am writing to you on a serious case of injustice that is happening in the USA and I can insure you that it will be impossible to ensure lasting peace and the effective implementation of the US Constitution that is suppose to ensure the people’s rights and freedoms.

I have serious concern about Nadia Habib and her mother, Nazmin Habib, the women, who live in Woodside, Queens who supposed to be deported by the broken and flawed Immigration and Customs Enforcement in US.

The family immigrated to the United States in 1993. The father, Jawad Habib, a taxi driver, has his green card. Nadia’s three younger siblings were born here and are citizens. But Nadia — who left Bangladesh when she was 20 months old — and her mother overstayed a tourist visa and are not legal residents, according to media report

Stony Brook University junior Nadia Habib, 19, came to the U.S. from Bangladesh with her mother Nazmin when she was a baby. Habib, a psychology major who wants to be a drug researcher, found out she was undocumented during her senior year at Bronx High School of Science. Her father has a green card and her three younger siblings, who were born here, are U.S. citizens.

On September 10, they received a letter from Immigration and Customs Enforcement saying that will be deported.

The problem began when Nazmin Habib became ill and missed a scheduled hearing in U.S. Immigration Court on April 26, 2000, according to a court document. The judge proceeded to conduct a hearing in absentia and denied her request for asylum based on past persecution in Bangladesh.

When the Habib tried to reopen the case by providing a doctor's note, the judge said the note was not credible because the doctor was not found in the court's registered list of physicians. Apparently this was a clerical error that was never corrected.

I welcome the decision of the ICE in not deporting these victims of laws.

I welcome Sen. Kirstin Gillibrand (D-NY.), and the New York State Youth Leadership Council (a student group advocating for undocumented youth) who have appealed to the Immigration and Customs Enforcement on behalf of Nadia and students at Stony Brook have launched a Facebook campaign in support.

I also welcome Sen. Tim Bishop and Joseph Crowley who are also involved in the case.

As per Development, Relief and Education for Alien Minors, Dream Act, undocumented students brought to the US as children would not be considered for deportation.

I wish to remind you in December 2010 report, the Congressional Budget Office and the Joint Committee on Taxation estimated that the November 30th, 2010 version of the DREAM Act would "reduce deficits by about $1.4 billion over the 2011-2020 period and increase government revenues by $2.3 billion over the next 10 years."

The same report also notes that the Act "would increase projected deficits by more than $5 billion in at least one of the four consecutive 10-year periods starting in 2021".

One recent UCLA study estimates that between $1.4 trillion and $3.6 trillion in taxable income would be generated for the economy over a 40 year period based upon estimates ranging between 825,000 and 2.1 million potential DREAM Act beneficiaries successfully obtaining resident status through the legislation.

On May 11, 2011 Senate Majority Leader Harry Reid reintroduced the DREAM Act in the Senate. Some Republicans who had supported the bill in the past, including Sen. John Cornyn of Texas, Jon Kyl of Arizona, John McCain of Arizona, and Lindsey Graham of South Carolina, withheld their votes, objecting that such bill should not be granted without some sort of balance increasing immigration enforcement.

Reid indicated that he would consider adding a workplace enforcement measure in the DREAM Act that would require every employer to use E-Verify, the government's Internet-based work eligibility verification system.

President Obama, I want to express my gratitude that you had supported the bill as one of your efforts to reform the US immigration system.

President Obama , I had a great hope that on the change in the life of many illegal immigrants back in USA , many of them are from Bangladesh, and I have special affection for them as I also belong to Bangladesh. I believed that the new policy would stop the deportation of most people who would qualify for relief under this bill, known as the Dream Act.

Mr.President, I want to remind you under the new policy supported by you, the government is supposed to review 300,000 cases of people in deportation proceedings to identify those who might qualify for relief and those who should be expelled as soon as possible.

Mr.President, Stony Brook University Student Nadia Habib, fulfilled the conditions of Dream act. The question is Nadia has been in America since she Was 20 Months Old and is a bright student. He mother, Nazmin Habib, is an ideal mother in the neighborhood.

I believe that Nadia and Nazmin Habib more than deserve to stay in the US and to have their asylum case reviewed.

History has shown that peace is fragile and ephemeral where justice and human rights are sacrificed for immediate political gain. As you have asserted, Mr. President, there can be no long-lasting peace where justice is denied.

Mr. President, in your speech in Cairo you committed the United States to defend and protect human rights everywhere and included people’s confidence in the rule of law and the equal administration of justice among the US core concerns.

Mr.President, now it is in your country that a young student and a mother of children are facing injustice by the broken and flawed Immigration and Customs Enforcement in US.

I believe the change you promised that can be done by you and with your right action; definitely a positive change will come into the life of this peace loving people’s life.

I urge to the United States to continue to show leadership to ensure accountability and respect and fulfillment of human rights.