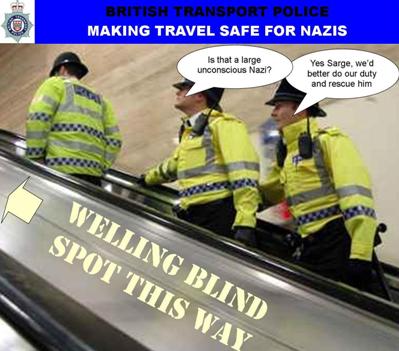 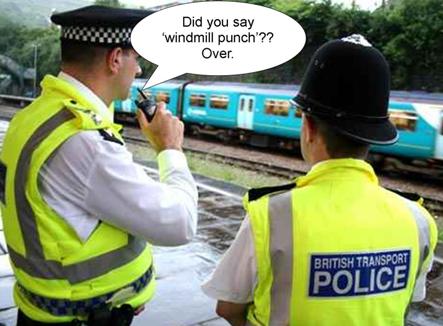 Andy was the ‘Point Man’, at London Bridge he stood,
Directing all the soldiers, in baseball cap and hood,
His stance upon the platform, a blatant act of war,
He saw his old mate Seanie, knock Donovan to the floor.

Next up is big old Ravi, ‘The Gatekeeper’ it’s said,
His job to block the fleeing fash, with his huge frame and head,
They saw he threw a bottle, at Hienel as he ran,
The Ravster holds ‘twas just a splash of lager, from a can.

And then there’s Phil De Souza, who hid beneath the stairs,
The ‘Heavy Mob’ in shadows, to catch them unawares,
With murderous intentions, he waited for that train,
To cause the travelling public, such misery and pain.

Austen the punk rocker, the second in that team,
A big bright red mohican, on camera to be seen,
It’s said he stuck the boot in, when Nazi boy was down,
Then stayed to drink a cup of tea, with station staff, the clown!

The Prince of Denmark, covered up his face so none could see,
The fearsome sight that lay beneath, if you want to ask me,
Those children that were frightened, have really no idea,
If he’d have been unmasked that day, they’d have had bad dreams for years!

And last there’s Sean ‘The General’, who acting on a hunch,
Delivered unto Donovan, that fateful windmill punch,
He asked for no assistance, it’s plain for all to see,
There was no bloody master plan, and no conspiracy!


Sean is one of the seven antifascists convicted of ‘conspiracy to commit violent disorder’ in the first Welling trial. Information about the case and the addresses of the six prisoners – Baker’s Dirty Half-Dozen – can be found on the Leeds Anarchist Black Cross website at www.leedsabc.org