Greece is sinking deeper into the financial crisis. Reporter for Swedish Newspaper Dagens Nyheter Kajsa Ekis Ekman visited this misunderstood country with a broken social contract, where... everyone agrees with each other. 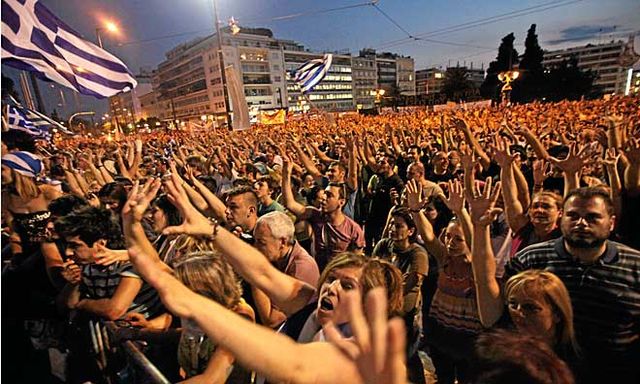 How would you feel if everything you owned was sold to pay back loans you had never seen? If your salaries were cut in half and the money went directly to foreign banks? And if, while you were trying to scrape by on the bare minimum, you were called lazy and spoiled? Picture this and you get an idea of what it feels like to be Greek right now.

I have just returned from Greece. A strange atmosphere hangs over the country. Gloom and hopelessness mingle with euphoric political awakening. Each and every individual's low salary and economic hardship has suddenly become part of a political context. Some speak of migrating. Others of overthrowing the government.

A gas mask hangs in many homes, as a memory of the 28-29 June protests when the government passed the austerity bill. I have never before been to a country where everyone, exactly everyone I meet, feels the same way. Angry with the euro, with Germany, with its own government and with themselves who voted for it. After a week in Athens, I can say that if I were Greek, I would be mad too.

What we have been told about Greece in the Swedish media basically boils down to Greeks working too little and being overpaid. Our finance minister, Anders Borg, has said that "the Greeks retire at the age of 40". In this very newspaper, Dagens Nyheter, on 17 June we read that "salaries in Greece have risen enormously." German Chancellor Angela Merkel has urged the Greeks to work harder and not take such long vacations. All this spiced up with the usual rant of a bloated and ineffective state. Now the EU is kindly stepping in to lend them even more money – shouldn’t that sort things out? So, why are they complaining?

What a sad tangle of disinformation! And what a sad lack of solidarity with a country we now ought to be supporting! The Greeks work the longest hours in Europe - 42 hours a week according to Eurostat, the European Union statistical office. Their average income is 803 euros a month. Actual retirement age is not 40, Mr. Borg, but 61.4. So we are talking about one of Europe's most hard-working and lowest paid people.

But this is a country dependent on tourism, lacking large industries. And it is a country with a broken social contract. People do not trust the state and the state does not supply its citizens with basic social service. And, on top of everything else, it now finds itself stranded in the eurozone.

Currencies are like clothes. Before the euro, each country had its own clothes. Countries could adjust them according to their needs; devalue in times of crisis or tailor the interest rate to suit. When the euro was introduced, all countries suddenly had to wear the same clothes. Yet the cloth was cut for some sizes only - such as Germany and France. For other countries, like Greece, this suit just did not fit.

Greece has for decades been ruled by two 'dynasties' - the conservative Nea Dimokratia and the Social Democrat Pasok, each headed by a family. Both governments have taken out huge loans, but few know where the money has gone. A lot of it has been eaten up by corruption and shady contracts. It costs a lot more to build a road in Greece than in other EU countries thanks to an army of middle-men.

The upshot? Greeks are ever more reluctant to pay taxes, since they feel they do not get anything back from the state. The lion's share of tax revenue goes to bolster a state bureaucracy which seems to exist mainly for its own sake. At the same time, social welfare lags behind. Patients need to bribe doctors to be examined, while Greek students need to complement their schooling with private classes to pass their exams.

And when the financial crisis struck in 2008 Greece, highly dependent on tourism, was knocked sideways.

With the euro, the government could no longer devalue its national currency to get exports going and overcome the crisis. Greece is stuck in the euro-straightjacket and can't move for fear of ripping the suit that all the other member states are wearing too.

Instead, the wearer is ordered a strict diet. This is called “internal devaluation” and it simply means that instead of devaluing a currency, you devalue the people's assets. Pressured by the EU, IMF and European Central Bank, Greek State bureaucrats are forcing through ever-tougher austerity measures on a monthly basis. Salaries are being slashed and large chunks of the country sold off. Beaches, airports, highways and half of the public sector are up for sale. In Syntagma square, a rumour is spreading that a German company is buying up the Acropolis.

I am staying in the home of some young people who belong to the '700 euro-generation'. Soon they will be the '500 euro-generation'. I don't know why I call them young people, they are over 30 – but they feel younger since they are still wondering what they will do in the future. None of them has children, starting a family is simply unthinkable these days. You are lucky if you are not still living with your parents at 30. They are educated, with years of university behind them, but they take occasional jobs as wedding decorators.

The safest place to find stable employment was - until recently – the public sector, but this is about to change. The situation is not uncommon; the same holds for our generation all over Europe. And using the crisis and threat of bankruptcy as blackmail, Greek workers are now being pushed to breaking point.

On Syntagma square, meetings are held every night. When I get there in mid-July enthusiasm has waned slightly. Participants number in their hundreds, as opposed to thousands not long ago. Anyone can speak and subjects vary: some propose a general strike, others plead to the audience not to steal from the people camping on the square.

Some Greek words get stuck in my mind. One of them is "Isimerinos", which means "Ecuador". The President of Ecuador, Rafael Correa, is a big hero here at the square. Three out of four Greeks want Greece to follow the example of Ecuador and Argentina: declare debt payment stoppage. One out of four wants the country to quit the Euro.

It's vital to understand that Greeks are not upset about a necessary evil, but about a totally unnecessary evil. The austerity measures enforced by the IMF are not solving the crisis; on the contrary, they are plunging it deeper into the mud. Instead of investing in the country, developing some industry other than tourism, building a welfare state and allowing people to believe in the future, everything is being destroyed.

The IMF, notorious for its raids in the third world, had to pack up and leave Latin America. Now, it is gnawing at the edges of Europe. Are we going to sit back and accept this?