As grassroots anger grows against the feeble facade that is democracy in the US, the 'Occupy' movement is gaining in popularity, and its massive online presence is being translated into boots - and tents - on the ground. After getting their start on Wall Street - the belly of the imperialist beast - the occupations have spread across the country. 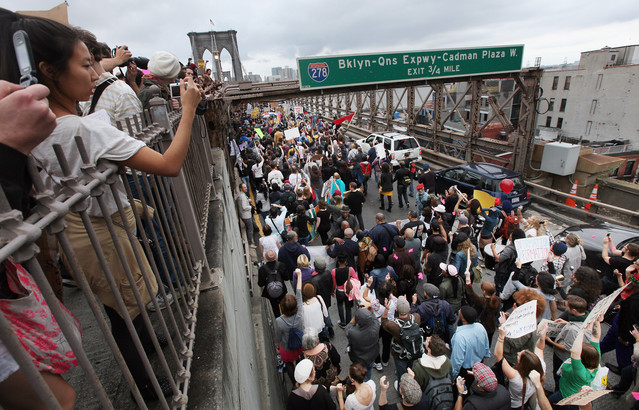 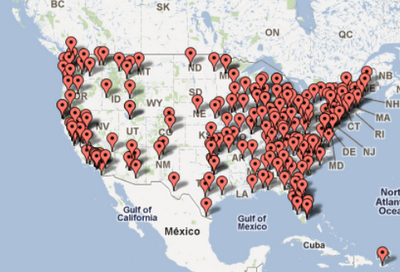 Occupations are underway or planned in these locations, according to Daily Kos

Cops made another bid to intimidate would-be demonstrators this weekend, when they entrapped over a thousand marchers on Brooklyn Bridge, and then arrested several hundred of their number. Again however, their tactics seem to have been backfired, and tens of thousands more are now getting involved. Copycat occupations have begun in Los Angeles and Boston, Massachusetts, and according to a graphic compiled by the Daily Kos (below), hundreds more are in the pipeline, all across the US.

Occupations are underway or planned in these locations, according to Daily Kos
Without a doubt, this is a movement against the death grip which the financial aristocracy holds over both the economy and the political system of the United States. No less than the 'Arab Spring' protests, or their equivalents in Greece, Spain and Israel, it shows that those who wrote off the working class as a political force did so at their peril. A mass fightback is now in its initial stages.

However, various issues need to be considered. Just like the demonstrators in the Mediterranean countries over the summer, they are predominantly very young and unemployed. This is hardly surprising, as it takes some physical hardiness to camp out in the midst of state hostility for three weeks, and anyone with any regular work commitments simply couldn't afford to spare the time.

Also unsurprisingly, as a generation that has come to political maturity at a time when the trade unions have managed to restrain all class-based resistance, the majority show little awareness of working class struggle as an agent of political change - beyond the struggle of remaining encamped. As sections of the union bureaucracy, plus fellow reactionaries such as former World Bank Vice President Joseph Stiglitz and multi-billionaire financier George Soros voice their 'support' for the demonstrations, they do so with the intention of making them safe for capitalism.

After all, in yesterday's New York Times, finance columnist Andrew Sorkin revealed some of the fear now churning the guts of the ruling class:

“Is this Occupy Wall Street thing a big deal?” the C.E.O. asked me. I didn’t have an answer. “We’re trying to figure out how much we should be worried about all of this,” he continued, clearly concerned. “Is this going to turn into a personal safety problem?”

The 'Occupy' movement is exciting, but it must reach out to the wider working class if it is to have any lasting effect on the political landscape. Beyond the occupations of town centres and squares, working people must fight for control of their own workplaces, neighbourhoods, and communities. Only then can "the 99%" dictate terms to those who have run roughshod over their basic needs for so long.