The last few weeks has seen a number of cases of political policing and repression of peaceful protest in Birmingham. The first case was in the lead up to the Lib Dem conference which was held in Birmingham from Saturday 17th September. The day before the conference started on Friday 16th three Activists from the National Campaign against Fees and Cuts (NCAFC) were arrested for a banner drop, which read “Traitors Not Welcome, Hate Clegg, Love NCAFC”. They would be held in prison on minor road traffic charges until after the national Demo against the coalition cuts was over.

The second case of political policing was at the Right to Work Demonstration against the coalition’s cuts on the opening day of the conference. As with last years Conservative party conference the police presence seemed overblown with armed police and the route of the demonstration not being allowed to go past the ICC the venue of the conference.

Finally one of the three NCAFC activists arrested for the banner drop was denied bail and held in prison for 10 days on the basis the he was facing charges for the occupation of the Fortnum & Mason store on the March 26th protests. 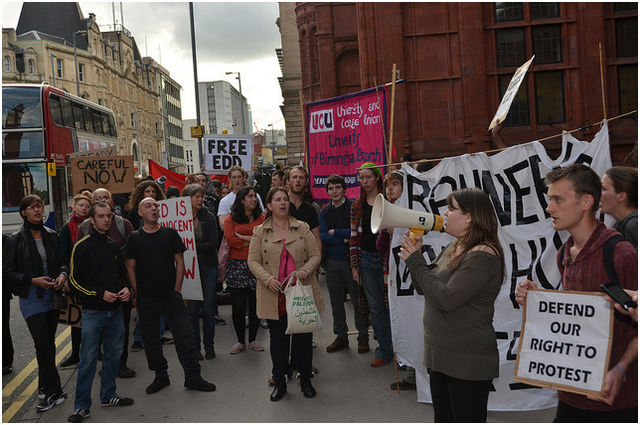 On Friday 16th September three NCAFC activists were arrested for a banner drop on the bridge connecting the Hyatt hotel, where Lib Dem delegates were staying, to the ICC conference centre (the venue of the conference), over Broad street, during rush hour. The banner read “Traitors Not Welcome, Hate Clegg, Love NCAFC” and was meant to remind delegates of the pledge taken by every Liberal Democrat candidate before the last election to vote against a rise in tuition fees and press for a fairer alternative. The three activists were remanded in custody for three days over the weekend due to their “membership of an organization that showed they could not be trusted not to cause danger to the public”. This conveniently meant they would miss the Right To Work Demonstration held on the second day of the Lib Dem conference on the 18th.

During the demonstration itself there was a heavy police presence including armed police with the demonstrators not being allowed to march past the ICC where the conference was taking place. This was a similar scenario to the Conservative party conference held in Birmingham a year ago.

On Monday 19th the three activists finally appeared in court where they all pleaded not guilty denying that they caused danger to road users. Even the prosecution accepted in court that no damage or injury was caused. Two of the activists were bailed on the condition that they do not enter Birmingham City Centre but the other activist Ed Bauer a 22 year old from Fleet in Hampshire was refused bail on the grounds of a previous conviction for aggravated trespass, as well as his continuing trial for the peaceful occupation of the Fortnum and Mason shop on March 26th of this year. Ed spent the following 10 days in Winson Green prison without trial on a minor road traffic charge for simply unfurling a banner. For the offence, which comes under Section 22a of the Road Traffic Act, bail is normally only refused if there was significant risk of the defendant fleeing the country or if they posed significant risk to the public. It’s hard to see how a non-violent protester poses a significant risk to the public.

On Monday 26th Ed had a bail hearing at Birmingham Magistrates Court where a solidarity demo was held to support Ed and to defend the right to protest. The demo was attended by about 80 people and could be heard inside the court. Ed was finally released after a growing national campaign to free him with support coming from John Hemming MP a local Liberal Democrat member of parliament for Birmingham Yardley, the National Union Of Students Executive Committee, an article in New Internationalist and a letter which appeared in the Guardian signed by Clare Short, Dr Sue Blackwell Birmingham UCU, Mark Thomas, Paul McNab Public Interest Lawyers and many others.

The repression of protest didn’t end with Ed’s release however, on his first day back at work at the guild of students he was suspended from his position as Vice president of Education undemocratically and unjustly before any investigation had taken place.

Following the actions of the Guild, The University of Birmingham followed suit by suspending him as a student. Ed is continuing his fight against both suspensions