Thomson protesters strip to reveal the Naked Truth about biofuels 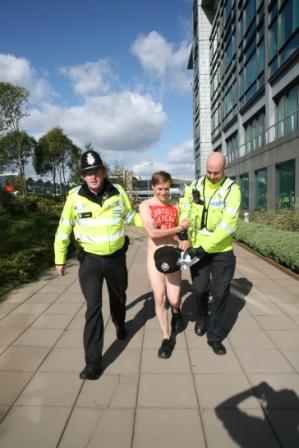 The Plane Stupid protesters mingled with passengers before calmly
removing their clothes. Dressed in nothing but red body paint that
declared ‘biofuels aren’t green’ they called on
Thomson to reconsider their plans.

Thomson claim that biofuels offer a greener future for aviation, but
respected environmental and social justice organisations from Friends
of the Earth to The World Development Movement and Christian Aid
believe that they will make the problems of global warming worse.

Today’s launch follows a delay of some months, after Thomson found
they couldn’t source enough used cooking oil. Even for one short haul
flight a week from one airport.

Protester Jo Turner said-
“It’s not surprising that Thomson have struggled to find enough
recycled oils for their stunt. Demand for recycled road transport
biofuels already far outstrips supply. Sadly, anyone with basic maths
can see that used veg oils will never be a viable solution. They’re
just a way of softening up the market to make way for the real nasties
like palm oil and jatropha. Biofuels are a devil in disguise- a
massively inefficient way of making fuel that destroys the very
ecosystems we need to control runaway climate change.”

Protester Chris Cooper added-
“Thompson seem to be acknowledging that we can’t continue business as
usual in the face of the current climate emergency. It’s a shame
their solution is to make matters worse. Vast tracts of rainforest,
ecosystems vital to halting climate change, are currently being
trashed to make way for biofuel plantations.

Land that grows food is being stolen from some of the world’s poorest
people so that it can start feeding planes. It’s a disaster.”

All three have been arrested and are awaiting charges.
Contact Emily Simon 07864643650 for interviews and more information.

1. The aviation industry talks about ‘novel’ biofuels which won’t
compete with food and forests. While major concerns remain around
these processes, including their use of synthetic biology, none are
widely available. Palm oil appears to be the only realistic choice for
commercial aviation biofuels over the next few years, it’s widely
recognised for it’s destructive impact.

3.On 1st July 2011 commercial airlines got permission to use 50%
biofuels made from specially refined vegtable oils as well as other
plant oils and animal fat in their engines.