Beyond ninety-nine-percentism: Not being frightened of ‘revolution’

One notable feature of Occupy Wall Street is its participants’ lack of hesitation in using the term ‘revolution’. Here comes the revolution! This is the first step of the revolution! Get up, get down, the revolution is in this town! You won’t stop our revolution! etcetera, etcetera. Distinguishing from these assertions of a revolution that has arrived, what does it really mean to envisage a revolution? And why should revolutionaries fear to act as well as talk, camp, and march? 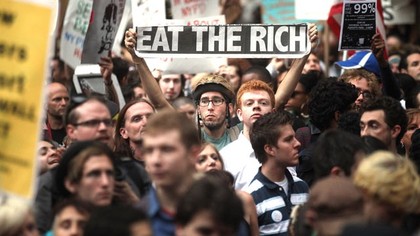 As Malcolm Harris and the Self-Negation Blogger argue in separate articles on Lib Com, there are several ways in which Occupy Wall Street could and should push beyond its current mold. They remark on the understanding that an occupation is usually for disrupting and seizing control of a space or infrastructure, and instating the joie de vivre of the temporary autonomous zone for strategic, organisational purposes. The Plaza, by contrast, is nowhere near interfering with the day-to-day of investors and traders. The square resembles a police “pen” – it’s true – and is no one’s sane idea of an action planning venue. Moreover, whilst the lack of clear demands is absolutely not a failing in OWS, its reluctance to fight for the enemies of capital, as a class, is. “We are the 99%” is only a good point if it comes with the understanding that even if bankers and billionaires were evil, that would not be the point; and that non-bankers are not all good. Marx asserts somewhere in vol.1 of Capital that the will of the individual capitalist is irrelevant within the horrific system he props up, entirely legally. Key quotes, then, from Lib Com’s perspective are firstly “We must begin to think and fight for ourselves as a class without “demanding” anything” – because demands already recuperate our actions for the current system’s logic – and secondly “If corporations are people, what would it mean to wrap our hands around one’s neck and choke it to death?“

Of course, it won’t be nice to choke a corporation to death. It might be achieved through a mass strike combined with the mass occupation and barricade of a bank’s headquarters. I mean thousands of people, not hundreds. It would throw things into crisis and open possibilities for all kinds of other action. It would draw the real violence of the state. For now, Wall Street occupiers fear guns and imprisonment. So do I! I can only imagine not fearing them in a context of mass rebellion. And like everyone else, I want someone else to create that atmosphere for me. That said, Occupy Wall Street does seem quite concerned to stay – even discursively – ‘nice’. Concerned, why? Fox News and all the more mainstream news media have already issued HUAC style verdicts on the demonstrators: unwashed! un-American! simultaneously pot-smoking ne’er-do-wells and threatening 21st-century shades of the Nazi brown-shirts (hat-tip to Jon Stewart for hilariously souping up this classic contradiction of the Right). The Tea Party has – thank goodness – disavowed any similarities between its brand of populism and Occupy Wall Street’s. (Ann Coulter says ‘This is what  a mob looks like’.) The unions are with us. Bloomberg and the millionaires are against us. The lines of political enmity are clearly drawn. Whom exactly is OWS afraid to scare away?

Is it liberals? Well, yes. The Daily Show’s and MSNBC’s support is important. But for the time being, I think the protesters are frightened of themselves. The exuberant and slightly hysterical word ‘revolution’ is bandied about as though to whip up, through repetition, the merest wisp of confidence in such a thing being possible. Will it come from somewhere? I hope so. People certainly aren’t going away. They sleep and work on Zucotti, for the plaza is a library, a home, a free university, a social/online media hub, a kitchen, a gallery, and a non-bureaucratic administration. The Occupy Wall Street journal is a success. Immense power resides, in a dormant kind of way, within the tens of thousands gathering around this cause, and immense power could even reside in the Plaza, properly defended from interference by the police. ‘Revolution’, ‘revolution’, ‘revolution’ is on everybody’s lips. Many of them, probably, mean significant reform of corporate law. Many mean a state-imposed cull of the wealth of the top 1% of U.S. citizens, for egalitarian redistribution. Some mean that ‘Obama must resign now’ (in favour of Ron Paul?!). Many feel that the ‘middle class’ has been destroyed: and if Occupy Wall Street turns out to be a bourgeois revolution, then I shall hold my peace. Many think they mean a return to the principles of the Founding Fathers and to “the constitution” (a real holy book, across the political spectrum, it seems). Many even mean some kind of right-libertarian destruction of the state. Many, however, speak of ‘class war’ and social justice. You can hear more kinds of soap-box offerings at http://livestre.am/PlNN.

Yet even on the terms of these sundry agendas and ideological camps, almost all the working-groups that I saw presenting at the general assembly on the Plaza yesterday stressed a non-confrontational or hyperbolically non-violent agenda. Art. Rallies. Camp maintenance. Outreach. Teach-ins. Yes. All good, very good things. But under the mandate ‘occupy Wall Street’, we can claim, crush, and rebuild a symbolic nexus of power. We won’t even begin to change the system of capitalist labour relations by simply meditating together, making bigger placards, and chanting – yes, it is finally beginning to get on my nerves – “WE. – ARE. – THE NINETY-NINE PERCENT!”

Because we aren’t. We must acknowledge our enemies, and we must attack the free-market logic they cleave to. 99%-ism ultimately substitutes bankster scapegoatism for systemic critique.