In my opinion, it is very likely that the historians of the future will look upon tomorrow as the day a truly global anti-capitalist movement was born. Following the example of Occupy Wall Street, Los Angeles, Boston, and hundreds of US towns and cities, a huge number of small and large occupations will begin on every continent except Antarctica (see Africa, Asia, Australia, Europe, North America, South America). 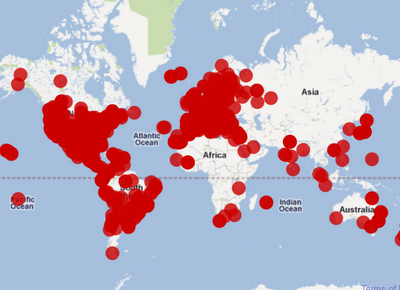 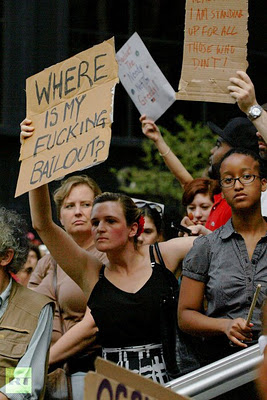 A picture which speaks a thousand words

All proclaim their opposition to the capitalist status quo - with its obscene riches at one pole and sickening poverty at the other. All of this has been organised online, completely outside the clutches of the decaying trade union bureaucracies, for whom 'international solidarity' is just some words they used to say a few decades back. The old organisations of timid protest seek influence on the margins, but they are ignored and seen to be as irrelevant as they actually are. It is highly appropriate that this moment has been crowned by the apparently successful resisting of the attempt by New York's mayor and second richest man to retake Liberty Park. There is a sense that the powers that be are losing control by the hour, if not the second if you follow it all on Twitter.

At least in one sense, the occupations are the descendents of Mohamed Bouazizi, who sparked the Tunisian revolution with his self-immolation at the start of the year. From Tunis, the flames spread to Egypt, and throughout the Arab world. Though the US empire tries its best to dampen down and channel the rebellion in each middle eastern nation, it faces a working class opposition that cannot be defeated by anything short of utter annihilation. Each new crackdown brings greater solidarity, and the story of Muslims attending the funerals of Christians massacred by an Egyptian military intent on sowing sectarian division is supremely heartening. Such indefatiguable militancy is an outgrowth of the desperate conditions suffered by those in employment, as well as the destitution for those who can't find work.

However, there are important differences between all that and Occupy X. In the west, our working class militancy was largely bought off in the period following World War Two, when the imperialist states made significant concessions. Chief amongst those was a welfare state, and though this has been under sustained attack for the last thirty years, it remains. As a result, it is still just about possible to survive without employment. Such survival is increasingly precarious however, and prospects look bleak, especially for the young. In the UK just under a million 16 to 24 year olds are jobseekers allowance claimants - more than one in five. The figures are far worse in Spain, Portugal and Greece, the nations which saw the biggest demonstrations by 'indignados' over the summer. It is now clear that the indignados were the direct forerunners of the Occupy X movement.

However, a crucial weakness of the square occupations is that by and large they have not been able to link up with workers in struggle, and have therefore become philosophically and politically stale. Of course, so far it is only in Greece that there have been large enough workers' struggles for such a process to be possible on any kind of widespread scale. As the next wave of recession hits, we can both expect and plan for the formation of major links between the occupiers and militant workers.

Another limitation of Occupy X is the seeming fetishisation of the square or park, which was only the most visible part of the Egyptian movement against Mubarak. It is true, the static occupation of public or private space does challenge capitalism as usual. This much is made clear both by the Democratic Party's attempts to co-opt Occupy for Obama's re-election campaign, and on the other hand where that has decisively failed, the state's attempts to recapture the spaces or beat and scare demonstrators into submission. However, the month-long Wall Street occupation has not impinged on the dealings inside the buildings, nor the workings of the profit system in general. The perspective that occupying a square or park is an answer in of itself is born out of class war inexperience. As workers are forced into actions beyond the control of bureaucrats, this experience will come.

There is also a problem with the "no politics" mantra which has been repeated in Spain, Portugal, Greece, Israel, and now the US. "No politics" is, of course, a political statement, and one which enables the formerly social democratic parties and their 'left' hangers on, against the building of a true revolutionary movement - which would demand the overthrow of the capitalist system, and the establishment of working class control over production and distribution.

We are a long way from that, of course. But the past few weeks have seen a movement grow at an exponential rate, and even as colder weather sits in for us in the northern hemisphere, the objective material conditions for a revolutionary workers' movement continue to ripen. The supposed apathy of say 2007 seems a millions years past. We live in interesting times.