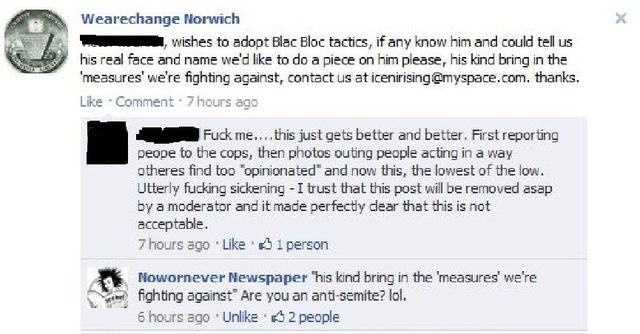 With criticism of the global occupy movement mounting in certain circles mixed emotions permeated the group of NCAG supporters and sympathisers that attended the Norwich event. We decided that, in the name of solidarity, our attendance would be appreciated, despite diverging views and tactics advocated by the Occupy movement and NCAG members. After a slow build up numbers peaked at less than one hundred around 4pm on Saturday afternoon.

A physical and ideological divide was clear throughout the course of the two days NCAG were in attendance of the event. This divide was to develop into a gapping ravine as time marched on. Despite an initial attitude of boisterousness and revelry the mood cooled fairly quickly, there was little to offer from the event organisers (henceforth ‘the vanguard’) to draw in a crowd, as the call and answer megaphone rhetoric appealed only to the union and socialist faithful. Passers by were bemused by the hippy drum circles and slogans painted on signs but few came and engaged.

The NCAG delegation was a little more successful in courting popular appeal, attracting some support from quarters which the vanguard seemed to consider unsavoury; the working class, the youth and the homeless. Therein began our problems, unable to do right for doing wrong we were reprimanded for chalking on the pavement, first by the vanguard, then, on the formers request, the police. The forces of law and order after a little cajoling issued a warning for the use of the slogan “fuck the one percent”; requested by a thirteen year old boy who had come to join in the arts and crafts corner we had established. We later received another visit from the police threatening to confiscate our sound system after our hosts had complained to them. A few other minor falling-outs also occurred between the two groups mainly petty and pointed sloganeering and half-arsed undermining and character assassination.

We were quite clearly not welcome, despite supporting the majority of the movement’s grievances and having been engaged in similar activities. Though ultimately they lacked the balls to ask us to leave, as this would have halved their numbers. Had this been all it would have been easy to walk away as events wound down, happy we had played our small part in a global movement and had a good couple of days of protest, and merry making to boot, but as is par for the course, slightly miffed at the regressive and authoritarian leftist elements that overshadow almost all popular protest in the U.K. at the moment.

It was at this point however that, in the parlance of the youth, shit got real. We were alerted that, not content with collaborating with the police to make sure the event proceeded on their terms, despite not inviting us to any of their “general assemblies” (sic) and our failure to engage in any but the prescribed activities (sitting, and talking quietly and politely amongst ourselves) our tactical differences had become too much for them to bare. An NCAG member had suggested that given the event was called Occupy Norwich an adoption of black-block dress and an actual occupation of a corporate location may serve as a reasonable escsalation.

Below is a response, copied from their facebook page from a person/group calling it/themself ‘wearechangeNorwich’, with our comrades name removed:
“ …wishes to adopt Blac Bloc tactics, if any know him and could tell us his real face and name we’d like to do a piece on him please, his kind bring in the ‘measures’ we’re fighting against, contact us at

icenirising@myspace.com. Thanks”
Last time I checked the measures we were fighting were the political systems supporting global financial corruption, or are they part of a different 99% to the rest of us?

Suffice to say NCAG will have nothing to with any organisation that slanders, attacks and endangers our members.

As a result we intend to sever ties with the Occupy Norwich movement, for their member’s attempts to strangle dissenting opinion and activity, and to condemn all those who would call for information on any activist in a manor that can only be compared to that of the nazi Redwatch site or the touts on the payroll of the Police.

For further info on global problems with the occupy movement these links will set you on your way: