The Dale Farm Eviction and the Whiff of Fascism

Despite courageous resistance by families and a group of activists, Basildon Council are continuing their eviction of Dale Farm residents, backed up by the iron fisted brutality of Essex riot cops. Harrowing and devastating though the episode is for the people being oppressed, it also has dark implications for society as a whole, in the UK and globally. 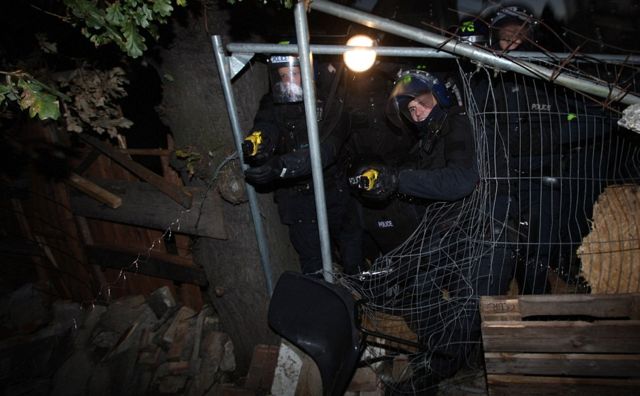 Cops smash their way onto the property at 7 am 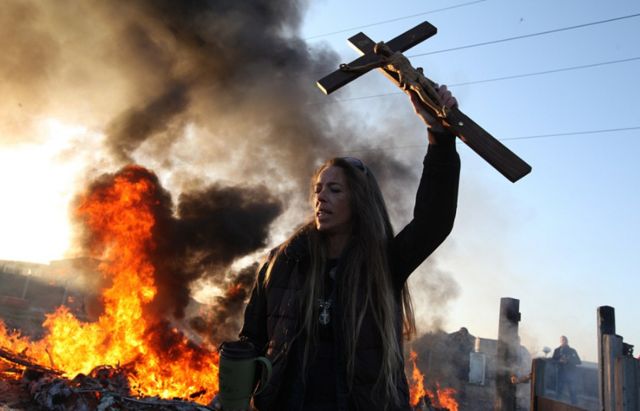 While the corporate media routinely spreads the deception that Dale Farm is an "illegal site", it is in fact legally owned by the travellers themselves. In one part, residents constructed buildings having won planning permission to do so. In the other - where eighty families had been camped before today- no such permission has been won. However, the lack of legal rights for travellers is part of a broader issue, and cannot justifiably be used to excuse one of the largest mass evictions in the country's recent past. It should be noted that 90% of planning permission applications by travellers are rejected.

The land currently called Dale Farm has been disputed for decades. Though it is often referred to as "green belt", it was used as a scrapyard by the council as early as the 1960s. English travellers first lived there in the 1970s, but they mostly left around ten years ago, when Irish travellers moved in.

Legal battles have been raging between Basildon Council and the travellers for years, and the latter have exhausted every possible avenue in defending their homes. But when the High Court verdict was handed down last week, it became clear that the council's eviction would be going ahead.

Cops and bailiffs began their invasion at seven this morning, as police in riot gear illegally broke down a rear fence, while an appartently planned distraction took place at the front. Electricity was cut off, affecting essential medical equipment used by one resident. Police used Tasers - again potentially illegal in this situation - and one batoned woman was hospitalised with back pain, unable to move her legs. Cops were met with bricks and other missiles, but their superior force is telling.

Local Conservative MP John Baron was quick to applaud the state aggression, stating that: "The police have been restrained but at the end of the day, the police have got to defend themselves to ensure there is no violence". [emphasis added]

Clearly for Baron, police violence is not violence, and in fact serves to prevent violence. The incongruity of violently defending yourself from violence before violence takes place does not seem to have occurred to him. In plain English, this gang of armed thugs smashed their way into someone's property and got their retaliation in first, in much the same way as the US and UK rained "shock and awe" on Iraq eight years ago, before condemning the indigenous resistance.

The financial costs of all this - estimated at nearly £20 million at a time of public sector austerity - show that this is not just some council's response to a planning issue. Rather it is a political attack on a marginalised layer of society, aimed at: 1) reclaiming a piece of land for potentially more profitable use, 2) diverting attention from ruling class crimes which are impoverishing broad masses of the population, and 3) spearheading the government's Localism Bill - which will decrease the already insufficient number of sites available to travellers.

In respect to number 2, the right wing gutter press has been leading this charge for months, combining crude ethnic stereotyping of the travellers with outright lies about the activists who have dedicated so much time to this struggle. In a time of sky-high economic tensions, the ruling class are desperate to find scapegoats and alternative hate figures, in order to protect themselves from the seething class anger now endemic in society.

In this respect, the British ruling class is no different to the French, the Italian, Hungarian and Czech governments, which have all dramatically increased their persecution of Roma in recent times. This - alongside the anti-Muslim bigotry promoted by rulers throughout the western world - is an expression of the sort of ruling class decay that was last seen during the last Great Depression, and ultimately led to fascism in Europe.

The events at Dale Farm must serve as a warning to all working class people: Today they came for the travellers; tomorrow they are likely to come for you. 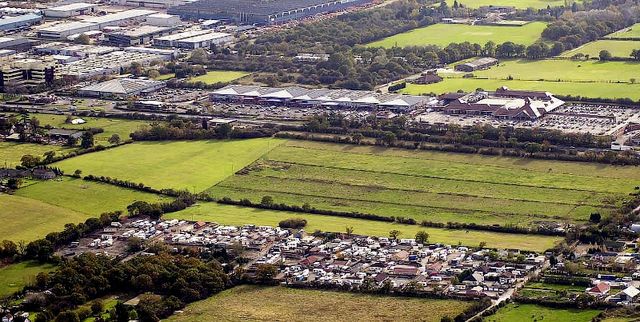 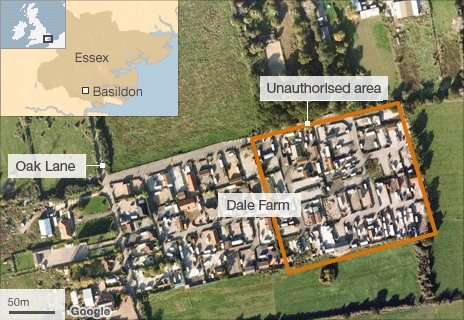 OK, I've posted this image taken in 2003 or thereabouts which was taken from a chartered small prop.

This image shows at the bottom the traveller Dale Farm site which has not been extended beyond the perimeter that you see here. The site is pretty much the same now as it was back then, although recent images do appear to show some depopulation. You can also see at the top, large-scale development including a retail park, sports playing field's, and in the top right hand corner, a large industrial park containing factories, businesses and some large international corporations. The rent paid by these businesses and corporations is way and above enough to help find the travellers a place to go. The dividing line between these developments is the A127, a very busy arterial road that runs from London right through to Southend on Sea. It is one of the busiest arterial roads in England.

The land at the top of the image beyond and including the developemts is excusively under private ownership so there are no public spaces or right of way there at all.

This image is one you are unlikely to see printed in the MSM because it shows clearly that the general area is already in a state of advanced development. The images you will see printed and online in the MSM, will only show the traveller site looking in the opposite direction. This is because the traveller site can then be placed with a green countryside background emphasising the 'green belt' angle which the MSM wish to show. This is probably because the MSM doesn't particularly want to burn its bridges with the government, which clearly is fully backing the violent and shocking behaviour we have seen today.

The second image is from the BBC, that bastion of competency and fair mindedness. This image shows a directly overhead view that clearly isn't of any real value. Although it does helpfully allow you to make a judgement about what bit of the site is good, and therefore, what bit is bad.

The third image is taken from Basildon Council's own website and is clearly a litle more helpful, although is still taken from an angle looking away from the bulk of industrial development in the town.