After six days of peaceful occupation of the city square, and five days before the Queen is due to visit Melbourne, Lord Mayor Robert Doyle warned that if the protestors didn't leave today they would be forcibly removed. The eviction was carried out by 400 police including riot police and dogs. Horses and capsicum spray were also used to attack the crowd at various times. People stood their ground in the square before being removed one by one. Occupy Melbourne then staged a peaceful sit-in in Swanston St which was again brutally attacked. At least 65 people were arrested, most released without charge however it is believed that 5 people remain in custody. The crowd regathered at the State Library in the early evening and have vowed to gather once again - at 12PM in Federation Square, Saturday October 22nd. The struggle against social and economic inequality, against corporate greed and for a real democracy continues tomorrow on the streets of Melbourne and around the world.
Related: Occupy Melbourne Statement 3.30PM | 6PM Statement by Legal Support Team | Occupy Melbourne Press Release: Police Violence Warrants Full Inquiry | 3CR report | photos on flickr
Youtube footage of police violence:
video: protesters dragged away | video: man trampled by police horses | Occupy Melbourne - violent cop hits peaceful protester in the face | Police dogs and arrests in Swanston St | video: arrests in City Square | video: on the streets | Another violent arrest
Blog reports: Mike Stuchbery | Benjamin Solah | Green Left Weekly Live Blog | Simplicity Collective Blog | Nicola Paris
See full article to read an account of the day as it happened. 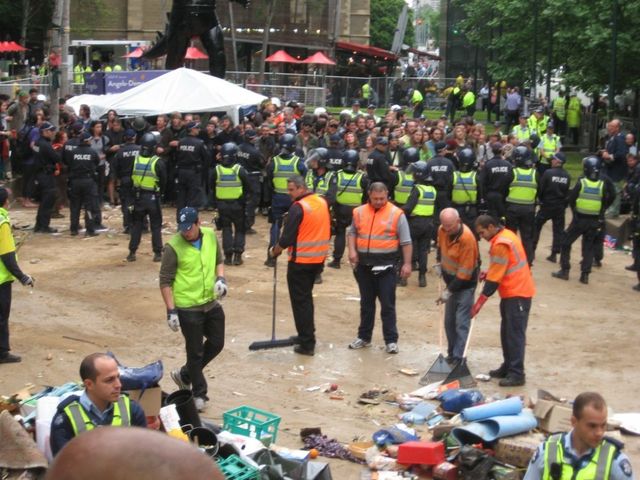 The police moved in shortly after 9am, and with the help of council workers and private security guards corralled everyone in with fences, even refusing to let in the legal support coordinator.

By 11am, after several arrests including some with injuries, the police dragged a solidarity protest off Swanston St when they occupied the street. Meanwhile the council workers and cleaners cleared the square of tents, cooking equipment, and everything else except some one to two hundred protesters (hemmed in by a cordon of riot police) who locked arms and chanted throughout their hours long ordeal.

At noon the square was clear except for police and protesters. There was a huge police presence along the streets, with hundreds of shocked onlookers separated from the City Square by a double-fence barricade, and horses aggressively keeping people off the street.

Then the last of the protestors were dragged and hauled from the square, often thrown into the waiting crowd.

Within minutes hundreds of people had occupied the intersection of Collins and Swanston St and after approximately an hour police horses charged through the crowd and police forced everyone away from the intersection, arresting some and shoving many bystanders and supporters out the way - effectively occupying the intersection themselves. Barking police dogs help to keep protestors at bay.

More advances by police had moved the crowd further up Swanston St by 2pm. The day wasn't without moments of levity however with sing alongs to "Always look on the bright side of life" and "We all live in a fascist regime" to the melody of Yellow Submarine.

At 6PM Occupy Melbourne reassembled for a General Assembly at Trades Hall in Carlton. The meeting agreed to meet on Saturday 12PM on Federation Square. A number of protestors are spending the night at Trades Hall.

The Legal Support Team has received many disturbing accounts of police brutality throughout the day including capsicum spray being used on juveniles, peopled kicked in the groin, charging police horses into crowds, people punched in the face, racial and homophobic taunting and an elderly woman being knocked over by a line of police. Channel 7 news reported that six people were treated by paramedics for capsicum spray. At least 62 people were arrested but possibly up to 100 were arrested during the police attack. Most were released without charge although some have been charged with Breach of the peace. As of 10 PM on Friday night, it was believed that 5 people may still be in custody on unknown charges. Statement by Legal Support Team

If you witnessed or have been a victim of police violence then Occupy Melbourne Legal can be contacted on 0434 126 515 or by email at: occupymelbournelegal@gmail.com It will be imperative that as a movement we show solidarity with all those injured and arrested.

More Video Footage
Footage of eviction from the Square