The ‘Rebel’ Assassination of Muammar Gaddafi: a NATO Operation from A to Z ... Muammar Gaddafi – revolutionary leader of the Libyan Arab Jamahiriya – was assassinated on Thursday 20 October, 2011, in the Libyan city of Sirte. The precise circumstances surrounding his death have been clouded with mystery and contradicting reports, but the media consensus is that NATO’s ‘rebel’ stooges captured and killed him. This has lent the unelected and universally despised NTC occupation government a decisive propaganda victory in the war on Libya. However, a picture is emerging as to the actual circumstances of his death, one that puts NATO special forces – likely the British SAS – in the centre of the frame. 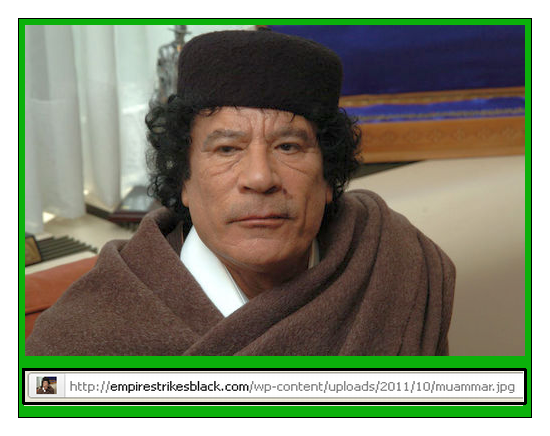 SAS squads hunting Gaddafi for weeks: NATO special forces including the British SAS have been on the ground in Libya since February – long before the beginning of the Orwellian ‘no-fly zone’. These forces set up bases in Libya from which they trained and directed the poorly-trained ‘rebel’ mercenaries being used as pawns to overthrow Gaddafi. The Libya war would not have been possible without the presence of these special forces. NATO airstrikes have been coordinated by these operatives on the ground. Further to this, the incredibly inept ‘rebels’ have proven themselves utterly incapable of achieving and holding a single military or strategic victory against the overwhelming size and breadth of the indigenous Green Libyan Resistance. Operation Mermaid Dawn, coordinated and overtly carried out by Western special forces and soldiers, was an indication of the sheer ineptitude of the tribalists, terrorists and extremists fighting for NATO as ‘Libyan rebels’.

After Operation Mermaid Dawn in August, British SAS soldiers, dressed in civilian Arab garb and carrying the same weaponry as the ‘rebels’, refocused their efforts towards hunting down Muammar Gaddafi. Furthermore, the British media was replete with reports of this special forces activity on Libyan soil.

A matter of days ago on Thursday 20 October, 2011, NATO’s war on Libya culminated in the assassination of Muammar Gaddafi. As could have been predicted for a war replete with brazen psychological warfare, the ‘official’ story was that the ‘rebel’ forces had captured Gaddafi cowering in a sewage pipe, and he subsequently died in their custody. This story was betrayed by the fact that NATO themselves admitted to bombing the revolutionary leader’s convoy as it was travelling in the Sirte area on that morning. U.S. officials confirmed that an American Predator drone fired on the convoy, as did French aircraft. In reality it is not justifiable to claim a ‘rebel’ victory here, when NATO bombs were instrumental to Gaddafi’s capture, as they were to the entire war. .............. M O R E:

US drone attack kills 9 in Somalia: An airstrike by a US unmanned aerial vehicle (UAV) has killed at least 9 civilians and wounded several others in southern Somalia ........

Mit über 100 Millionen Euros hat die Merkelregierung die TNC-Verbrecher unterstützt und unterstütt sie weiter. ..... The body of the son of former Libyan leader Muammar Gaddafi, Motassim is seen inside a meat locker in Misrata October 22, 2011. Gaddafi's body, bloodied and half-naked on a filthy mattress in a meat locker, is the latest spoil of war hauled back to Misrata by its exuberant fighters, confident they are Libya's fiercest revolutionaries. ......