LSX Occupation: What is this Machine?

This is a little late considering the London Occupation of Paternoster Square happened about 2 weeks ago; however the image of the machine in the picture, wheeled in by the Met during the demo, keeps nagging me. What the hell is it? 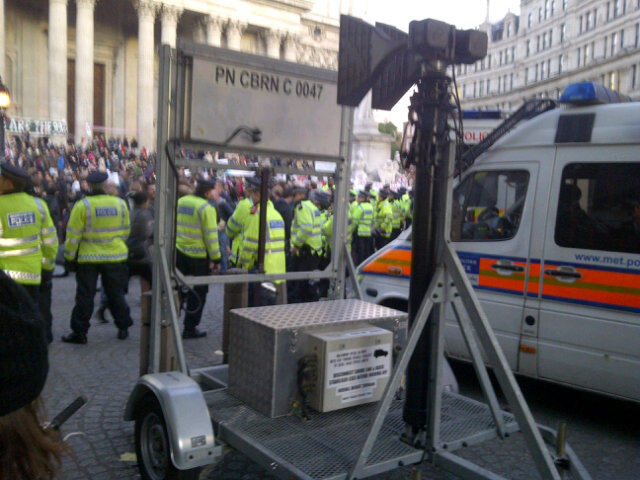 The Machine: What the hell is this?

We all know the London Met has a soft spot for harder, dirtier machinery for dealing with Public Order situations, and this may just be their latest. During the peaceful Climate Camp on Blackheath, the Met used military strength sonar on the camp (evidenced by the death of 2 rare fruit bats on the Heath) to listen in, while the nasty little plods were held back from hurting people. Helicopters aplenty (at £1,500 per hour) are used on all demos; which actually help protesters find the demonstration. For the last year the Met (with the Daily Hate readers) have been asking for water cannons and rubber bullets to add to their arsenal for keeping people quiet. However, the machine above was wheeled out at the LSX Occupation demo two weeks ago, which saw the 99% establish their Camp. It was late in the afternoon, and the murderous TSG started pushing and shoving on-lookers back, as they established a sterile zone and police van cordon around the Occupation. In the confusion, this machine was wheeled in and plonked within the cordon, facing the Occupation demonstrators. At first we hoped in might be a sound-system that might pipe out some phat dubstep for the crowd (the police having finally got a sense of fun); we were sorely disappointed when it just stood there and did nothing interesting.

So what is it? Have the Met been on a shopping spree at DSEi, with that bottomless pit of taxpayer funding, and bought this? How does it work and what does it do? Any tech-intelligence out there?