IMPORTANT CAMPAIGN CONCERNING LIBYA! ... Lizzie Phelan, an independent journalist from Britain, who was reporting from Libya during the NATO bombing and the fall of Tripoli, informed the public about Dr. Abuzaid Omar Dorda, the senior Libyan official, a former UN ambassador who is currently being held and tortured by NTC members, his life being in grave danger. Thus, we are urging international community, humanitarian organizations, UN and CoE to promptly demand the release and guaranties for the life of this respected man, whose human rights are grossly violated, by the 'new democratic' Libyan regime. 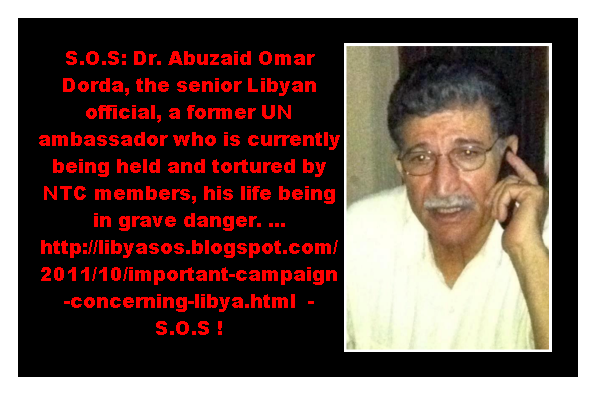 Lizzie Phelan said: "The Libyan media have tried to say that Dr Abuzaid Dorda, one of the most well respected members of Libyan politics in recent history, tried to commit suicide. Everybody knows how defiant and strong Dr Dorda is and that this is far from the truth. The reality is he was thrown out of a window and one of his doctors told his family that both of his legs were broken and he has been badly beaten and tortured for the past month. The last person to see him was a woman from Human Rights Watch called Susan a couple of weeks ago who said he was fine! (She has since left the country). The family has had no contact him since he was detained and they have no way of reaching him at a time when it is clear that now Abdelhakim Belhaj's Tripoli brigade are trying to kill him. A figure like Dr Dorda is important for any future prospects of peace in Libya and the chances of a backlash are heightened if he is martyred. I have received a reliable report that the "rebels" tried to assassinate respected brother Dr Abuzaid Dorda, a senior member of the Libyan government who is held in high esteem by the Libyan people. Dr Dorda will not submit to the torture that they have tried to inflict (both of his legs have been broken and worse) and give over the information they desperately want from him. He used to be an ambassador to the United Nations himself, but now we can expect the United Nations and all other instiutions of "international law" look on while a senior figure of a sovereign state is threatened with assassination by their stooges?" ......... - SOS - M O R E: