A Return To Mubarak's Prisons

The jailed Egyptian revolutionary Alaa Abd El Fattah has written a secret letter from his prison cell, accusing the country's military rulers of murder and lamenting what he views as the army's hijacking of the revolution.

The letter, produced covertly from inside Bab el-Khalq prison where Abd El Fattah is being held, was handed to his pregnant wife, Manal, during a visit on Monday. It is being published in Arabic by the Egyptian newspaper al-Shorouk and in English by the Guardian, and is likely to intensify the growing divisions between Egypt's increasingly repressive army junta and pro-change activists on the street.

Abd El Fattah, one of Egypt's most prominent anti-regime voices and a former political prisoner under the Mubarak dictatorship, was taken into military custody on Sunday evening following public criticisms of the army's conduct on the night of 9 October, when at least 27 people were killed during a Coptic Christian protest in downtown Cairo.

Like many other activists, Abd El Fattah accused the army of direct involvement in the bloodshed, a claim that appears to be supported by extensive witness reports and video footage. He was charged by military prosecutors with "inciting violence against the army", and is being held initially for 15 days – a detention period that can be renewed indefinitely by the authorities. His arrest has provoked outrage across the Middle East and beyond. 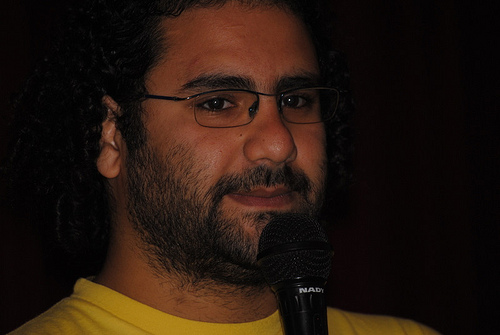 I did not expect that the very same experience would be repeated after five years, after a revolution in which we have ousted the tyrant, I go back to jail?

The memories of being incarcerated have returned, all the details, from the skills of being able to sleep on the floor with eight colleagues in a small cell (2 x 4 meters) to the songs and discussions of the inmates. But I am completely unable to remember how I secured my glasses while asleep. They was trampled upon three times in one day. I realize suddenly that they are the very same pair I had when I was jailed in 2006, and that I am imprisoned, now, pending investigation under similar flimsy accusations and reasons of that incarceration, the only difference is that we have exchanged State Security prosecution with military prosecution: a change fitting to the military moment we are living.

The previous time, I was joined in detention by 50 colleagues from the Kefaya movement, but on this occasion I am alone, together with eight wrongly accused, the guilty is as wronged as the innocent.

As soon as they realized that I was from the "Youth of the Revolution" they started cursing at the revolution and how it failed in "sorting out" the Interior Ministry. I spent the first two days only listening to stories of torture by the hands of the police that is not only adamant on resisting reform, but is seeking revenge for being defeated by the downtrodden, the guilty and the innocent.

From their stories I discover the truth of the great achievements of the restoration of security. Two of my colleagues are seeing jail for the first time, simple youth without a grain of violence and their accusation is? Forming a gang. Indeed, Abu Malik alone is an armed gang unto himself. Now I understand what the Interior Ministry means when it reports that it has caught armed gangs. I congratulate us for the restoration of security then.

In the following few hours, sunlight will enter our always dim cell, we read creative Arabic engravings of a former colleague, four walls from floor to ceiling covered in Quran, prayers, supplications, thoughts and what appear to be the will of a tyrant to repent.

The next day we discover in the corner the date of the inmate's execution and we are overwhelmed by tears.

The guilty plan on repenting, but the innocent do not know what to do to avoid a similar fate.

I stray from them in the radio, listening to the speech of his Excellency the General inaugurating the tallest flag in the world, one which will certainly enter the record books. And I wonder: Was the inclusion of the name of the martyr Mina Daniel as one of the instigators in my case also a record in audacity? On the basis of it not being sufficient for them to be first to kill the victim and to walk in the funeral but also to spit on the corpse and accuse it of a crime?

Or perhaps this cell can win the record of the number of cockroaches? My thoughts are interrupted by Abu Mailk: "I swear to God Almighty, if the wronged was not absolved, this revolution will not succeed."