Students · Sparks · Anarchists
Out on the streets for Nov 9th

Anarchists will be mobilising on November 9 in solidarity with the students and the striking electricians.

Get active, get angry, get visible! 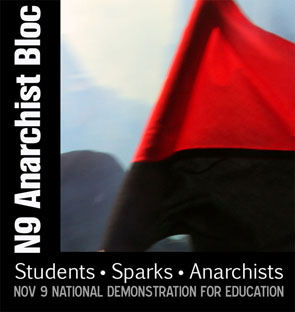 Students
The national demonstration against fees, cuts and privatisation will bring together university, further education and school students from across the country to stage the biggest education protest in the capital since last December. Also planned is a mass walkout of schools, FE colleges and universities by students in support of the demo.

Dubbed “march on the city” thousands will be descending on the streets of London, starting at the University of London Union, Malet st through Trafalgar Square and up the Strand, before passing St Paul’s Cathedral to connect with the Occupy London protest camp and ending at London Metropolitan University Moorgate campus next to the City of London, the heart of the financial capital.

The day of protest is aimed at the government’s education reform bill which is a chaotic and regressive attempt to introduce markets and private companies into education. The poorest will have to compete for ever-decreasing places at university while many others will be denied access to education through lack of funding and the rising cost of tuition fees. Students are either being priced out of the market or turned into commodities!

Sparks
Students will be joined on the day by thousands of striking electricians, who are attempting to prevent the big 8 construction companies from deskilling the industry and overturning long standing agreements, forcing wages down and undermining construction industry workers’ bargaining rights. Sparks across the board are being forced to accept new, imposed contracts by December 7th or face instant dismissal. In true militant style they have responded with a weekly campaign of direct action outside construction sites across the country, blocking entrances and picketing the main gates. Sparks have called November 9th as their big day of action.

Anarchists
Anarchists have been organising to ensure that we have a visible presence on the day, to be an active part of the growing resistance and militant action against the institutions of capital and forces of government, both Tory and Labour, who have sold off our future generations’ right to a free education.

This is our opportunity to join together with those who will not be governed by markets, dictated to by politicians, or accept the conditions being forced upon them.

Solidarity is our weapon!

There will be an anarchist bloc on the march. Meet at Malet Street outside Uiversity of London Union 12.oopm. Look out for the red and black flags and banners. Bring banners, flags, friends, and your best protest gear. Let’s make this a day the government will remember.