During today's Nov 9 protest by electricians, students and taxi drivers in central London, at least 2 mounted cops hid ID numbers by pulling metal numerals off their shoulders or by wearing yellow hi-vis webbing over their epaulettes to cover-up the numbers on their epaulettes - 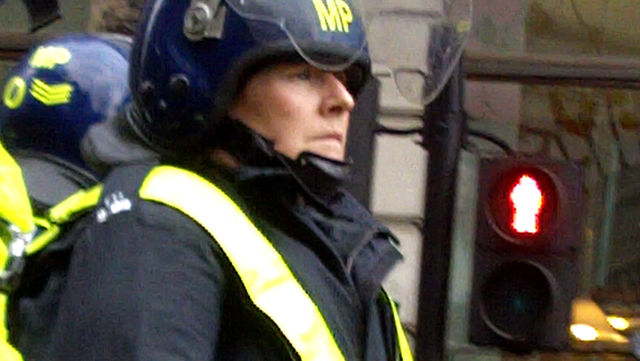 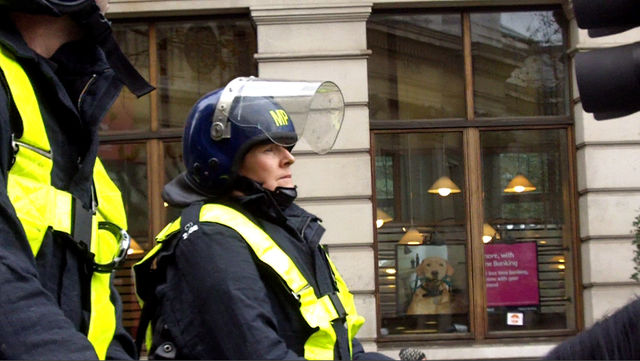 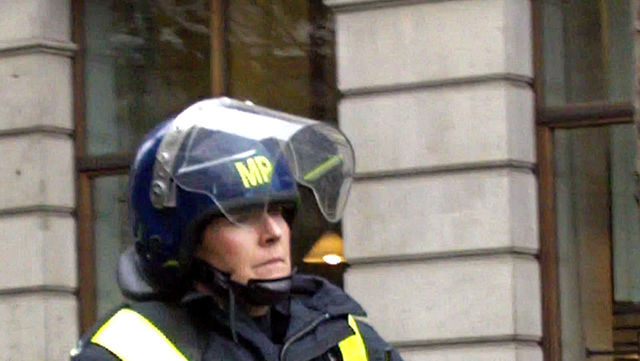 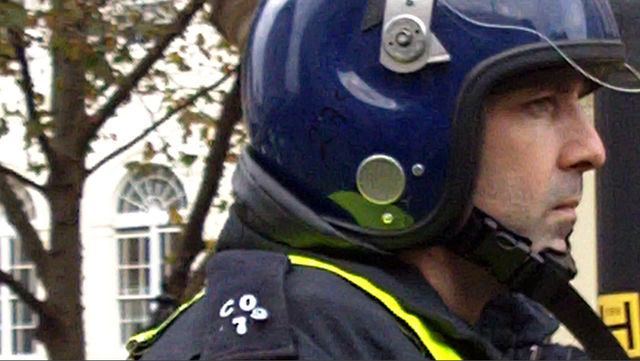 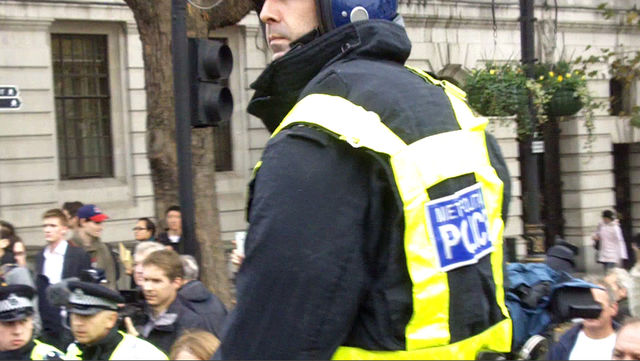 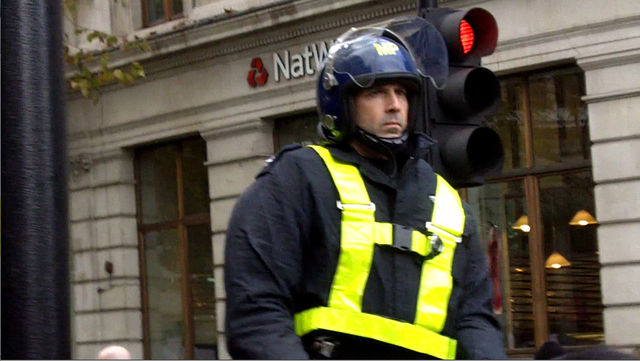 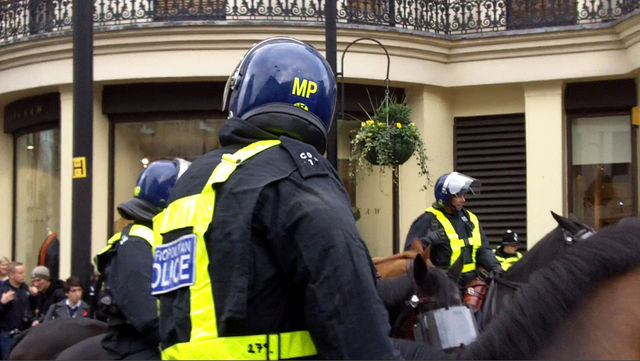 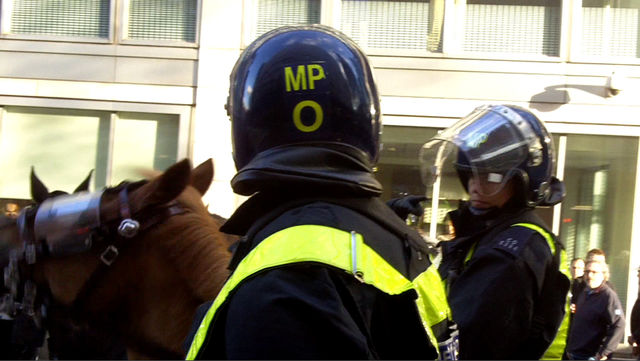 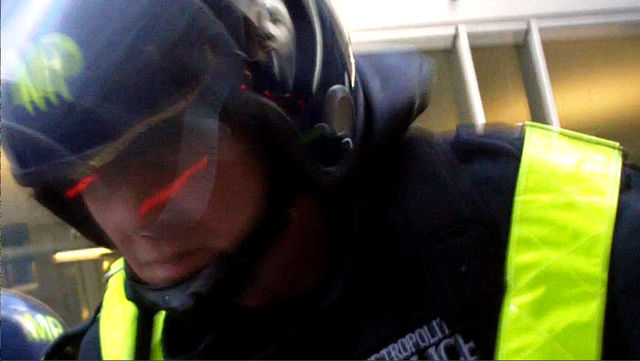 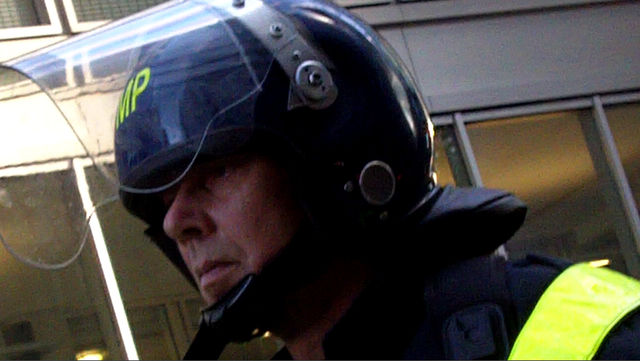 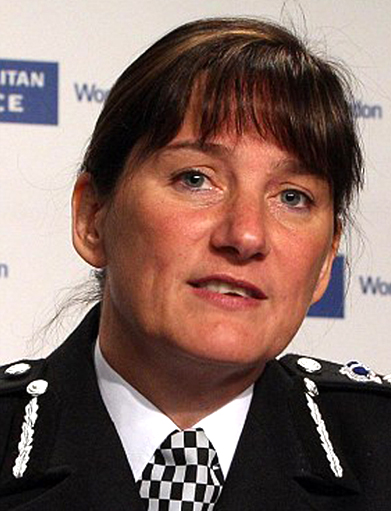 In clear breach of Met Police rules, during today's Nov 9 protest by electricians, students and taxi drivers in central London, at least 2 mounted cops hid ID numbers by pulling metal numerals off their shoulders or by wearing yellow hi-vis webbing over (rather than under) their epaulettes (to cover-up the numbers on their epaulettes).

I'm looking forward to cops trolling stupid comments about this onto Indymedia, but "you can stuff your rubber bullets up your arse".... have a nice day ;)

Please READ the blurb above BEFORE commenting that the cop in the 1st 3 photos is showing an ID number ;)

Another photo of these berks -

"You can shove yer rubber bullets up yer arse"

Another post focused on what the cops did or did not do rather than the meat of the march and action.

Some people need to grow up

Games up, you lose.

"Another post focused on what the cops did or did not do rather than the meat of the march and action.

Some people need to grow up"

From what I can see today, the protest and march has been completely overshadowed by the policing. The BBC and Sky News Organisations have been lamentable today in their coverage. Sky News and Kate Burley appeared to give the entire news coverage over to a police spokesperson who chattered away AT the audience making the coverage unwatchable.

And these are the same people who seem to spend so much time claiming they respect the right to protest BUT 'law-loving bigotry yap yap yap".

OK journo's and filth, this facade you claim to call a democracy just came to an end...we don't beleive you when you say you respect us, we now know its just an act. We are the upholders of our democracy not you. You have shown again that you have no fucking idea what you are talking about because you are nothing more than authoritarian faggots strangling the life out of this country.

You are slack, unreliable, dumb, mean, nasty, opinionated corrupt cretins of the very worst kind. You spit in our faces and call it advice, you shit on our freedoms and call it security, you threaten us with rubber bullets and call it policing, you talk down at us because you think we are as stupid as you. This is your world that's collapsing not ours. You made the corrupt institutions not us. You made a society of theiving delinquents not us. This is your filthy mess not ours.

Gloves off, knives out.

This is where you drop the baton.

You cannot reason with the War on Terror generation.

"Gloves off, knives out"? No-one used knives at today's (almost entirely peaceful) protest. The only weapons visible at the demo were police batons. The only people who threatened anyone were the cops who threatened to shoot plastic bullets. The cops used horses to try to assault protestors because protestors had the courage to stand up to police aggression, but I am absolutely confident that keyboard warriors like you will never have courage of your convictions, and that you will continue trying to discredit threads like this (and discredit the protest movement in general) with agent-provocateur trolling, inciting other people to commit acts of violence that you will never have the courage to commit yourself, while hiding behind the safety of the internet.

As for the person who commented about "victim mentality", speak for yourself

ok, newbies to protesting, have a little read up on years of protest marches and the tactics used to make them ineffective. Then go home, orgainse into effective affinity groups, train up and strike your targets with well-planned actions that actually do something rather than this symbolic shit.

Identifying cowards and scumbags is not a "victim mentality" 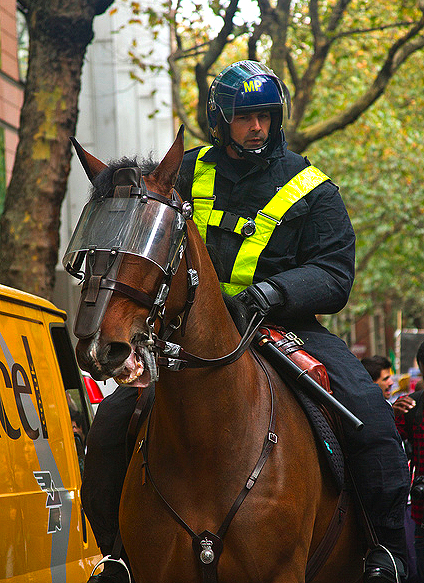