Only 300 EDL turn out for uneventful demo

Around 300 English Defence League members descended on Centenary Square in the city centre on Saturday 29th October. Although there were divisions from as far afield as Essex their numbers still fell well short of predictions - there were nowhere near the 1200 the EDL (claimed/forecast). There was a vast police presence throughout the city with officers stationed all the way up New Street and Paradise Forum as well as in Centenary Square. The police pre-emptively fenced off the Occupy Birmingham encampment in Victoria Square for the duration of the day.

The demo was largely peaceful in comparison with previous years however there were definite tensions between the police and the EDL, at one point there was a surge of chanting protesters which almost broke the police line and sent press and onlookers sprinting for safety. The protesters were throwing bottles and fireworks were set off. After this the police presence was greatly heightened and there were three lines of riot police and dogs separating the general public and the EDL after this extra deployment the demo was peaceful. A counter demo was held in Chamberlain Square called Unity and celebration of differences. The event was supported by many unions and was well attended. There was live music, DJ's and talkers promoting anti fascism. 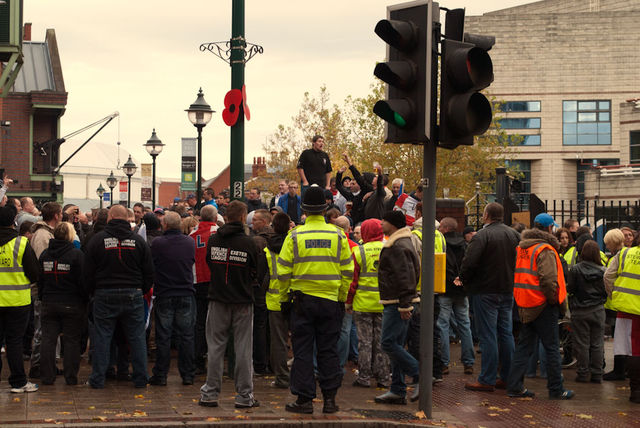 Some of the EDL supporters tried to provoke the police, there were also abusive chants and comments made to non-white passers-by. Though the speakers tried to mask the fascism and racism in their speeches the supporters consistently sang bigoted chants.

The English Defence League succeeded in bringing a bit of the city to a standstill but they arrived in diminished numbers made no new converts, instead wasted a large amount of police time.

In a separate incident a few weeks before the 29th demo, twenty five members of the EDL Rowley Division attacked a Muslim bookstall in Cradley Heath market. The local Ahmadiyya Muslim book stall and Qur’an exhibition were targeted and the volunteers were pushed, shoved and threatened in front of shoppers at 2:30pm on Saturday 15th October. The bookstall aims to raise awareness, increase understanding and improve community cohesion. The volunteers from the bookstall did not meet violence with violence and so did not respond to the provocation.

This isn’t the first incidence of Muslims being targeted in Cradley Heath, on Boxing Day 2009 Cradley Heath Mosque and Islamic Centre in Plant Street was burnt down.