Gaming enthusiasts are often accused of having a distorted perception of reality and blurring the distinction between the virtual and the real. But what if your military day job consists of doing what seems like playing a computer game, while picking off real targets? Where bombs guided by you from a safe distance really “splat” kids on the streets of Kabul, Gaza and Mogadishu? Welcome to the very real world of drone warfare. 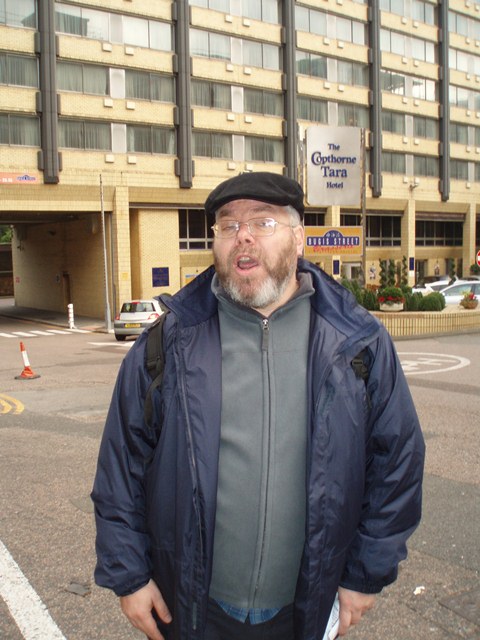 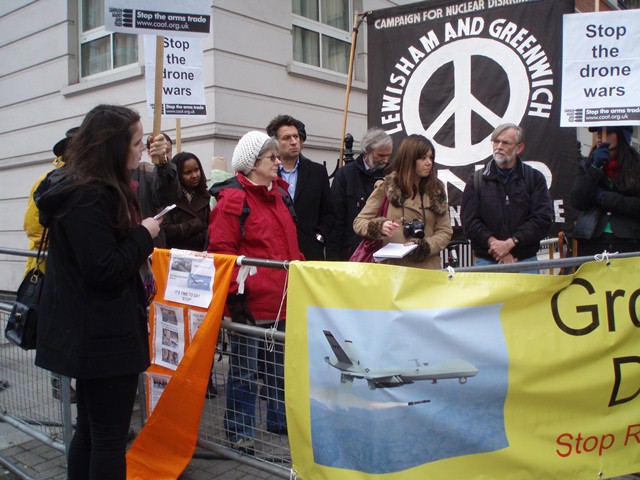 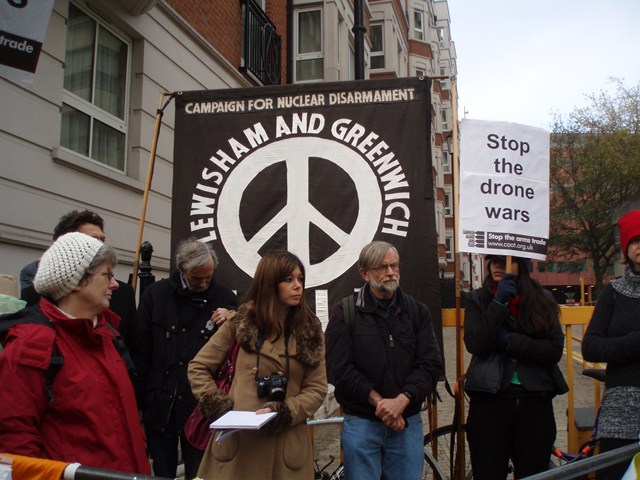 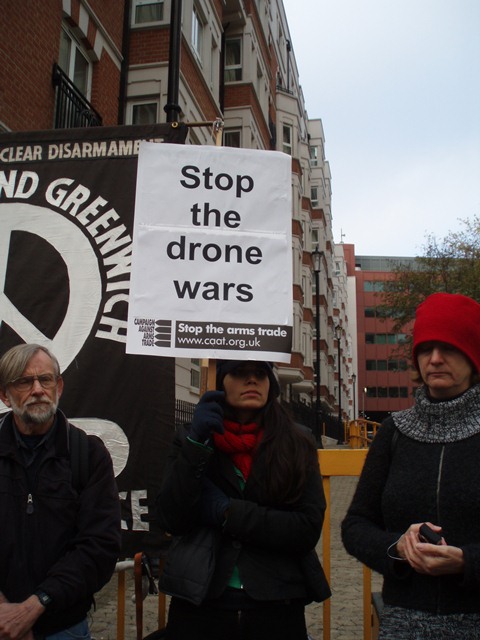 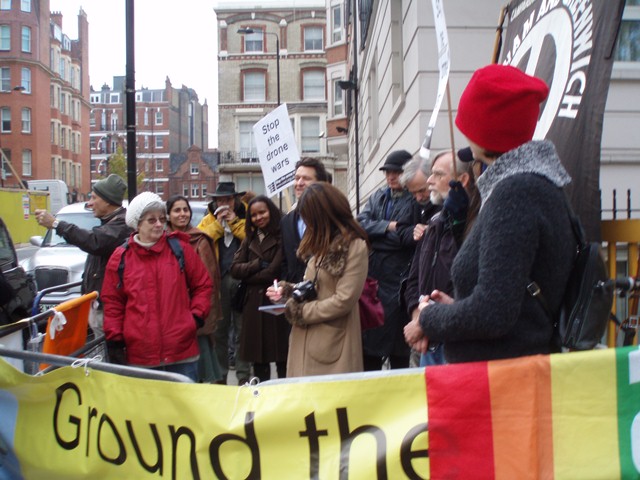 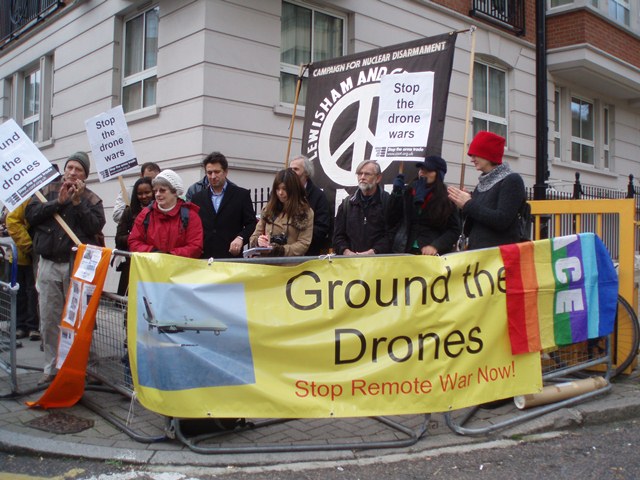 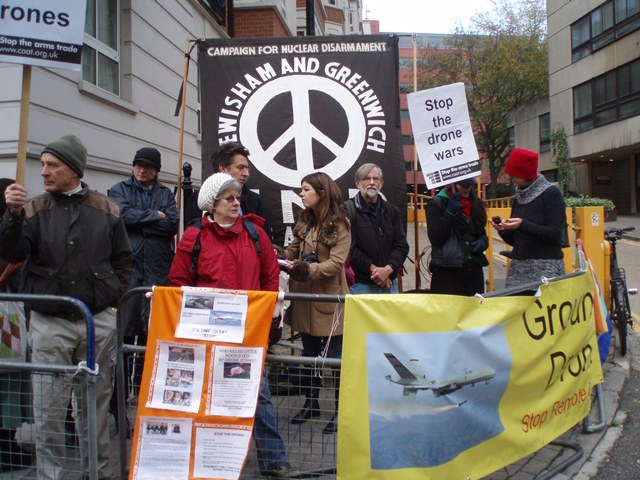 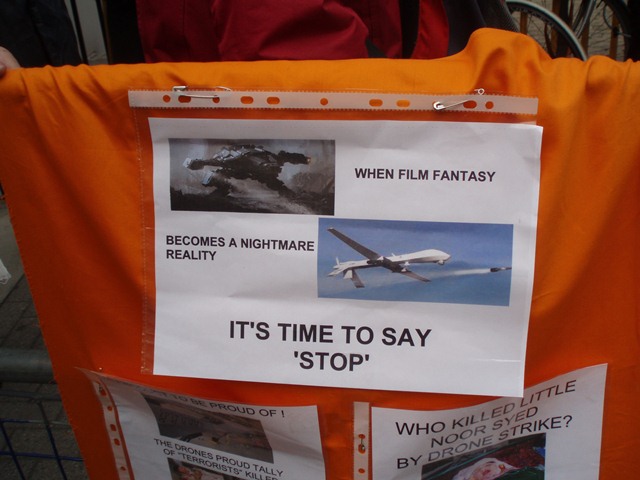 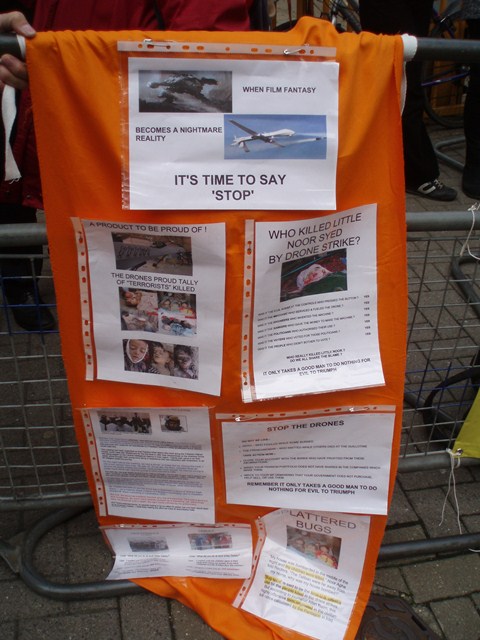 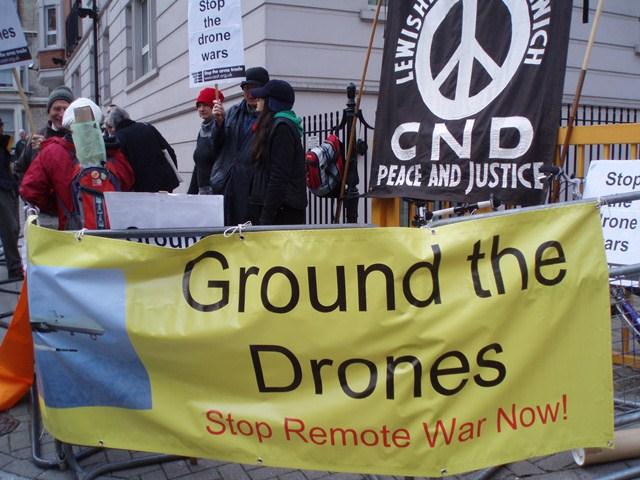 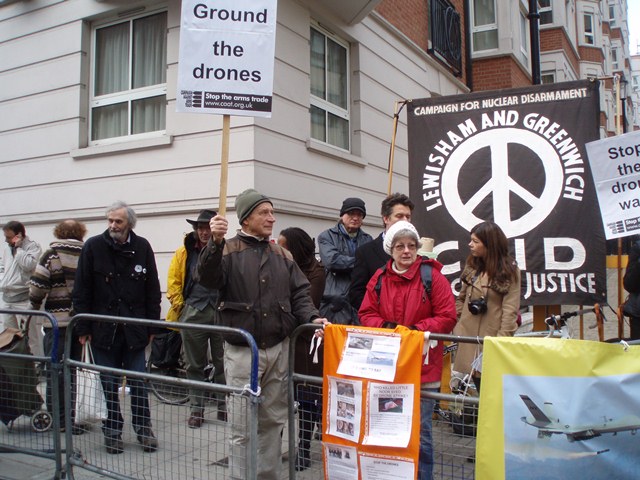 Gaming enthusiasts are often accused of having a distorted perception of reality and blurring the distinction between the virtual and the real. But what if your military day job consists of doing what seems like playing a computer game, while picking off real targets? Where bombs guided by you from a safe distance really “splat” kids on the streets of Kabul, Gaza and Mogadishu? Welcome to the very real world of drone warfare.

“Drones” are remotely piloted aircraft or “unmanned aerial vehicles” (UAV). While UAV have a number of useful civilian purposes, they are increasingly used in war and combat situations, for both reconnaissance and combat missions. To protest their growing popularity and “must-have” status with armies around the world, over two dozen campaigners joined the Campaign Against the Arms Trade (CAAT) and Drone Wars UK for a demonstration on day one of the “Unmanned Aircraft Systems” two-day conference outside a hotel at an out-of-the-way location in Kensington, London.

As the alleged weapon of choice against the Taleban, drone attacks in Pakistan alone have increased from 9 in 2004-2007 to over 100 in 2010 alone, with a similar increase in casualties (both civilian and military). There are no statistics available on strikes or casualties in Afghanistan. Not wanting to miss out on this opportunity and a stake in a rapidly-growing market in a time of austerity, delegates at the conference include NATO, military personnel from various states and all the major arms companies.

The small, civil protest, on a cold November lunchtime, was not unnoticed by the conference which sent out its own reconnaissance to photograph the protesters at various intervals. An Israeli delegate who claimed that “drones earn him a living” and “keep his children safe” came out and confronted the protesters with an abusive monologue. Just last month, Israel commemorated 40 years since its first drone operation on Palestinians in 1971.

The growing military popularity of drones has a number of reasons: they cost a fraction of the price of traditional jets and involve no casualties for the attacking side, creating a form of “risk-free warfare”. States, such as the USA, Israel and China compete to sell new military drones to others but some are starting to develop their own home-grown technology. While the gains are financial and technological, the casualties are human. Due to poor statistics, the actual numbers are unknown but could run into the thousands.

One of the most pernicious uses of drones is for the targeted extrajudicial killing of "high-value individuals". Drones are used for reconnaissance missions to seek out targets and while newspapers frequently cite instances of the assassination of alleged terrorists, more often than not, the vast majority of victims are civilians. Drone attacks on wedding parties, funerals and other social gathering are not uncommon. In the case of targeted killings, like a computer game, a value is given to the number of kills and their status – the target, family members, bystanders, etc. Like casualty figures, the numbers add up uncomfortably. Recent victims of such strikes include American-Yemeni Muslim scholar Anwar Al-Awlaki and his 16 year-old son, Abdul Rahman. In the latter case, he was collateral damage and not the target.

The number of extrajudicial executions by the US and its allies, including Britain, in various countries, such as Afghanistan, Iraq, Somalia, Yemen, etc. is growing. Not only are such attacks in breach of international humanitarian law, particularly with respect to the “collateral damage” to civilians, this aspect of the “war on terror” falls clearly outside of the realm of due process rights. It may have been how the west was won and worked with Billy The Kid, but the “shoot first and do not ask later” policy currently applied by the US and its allies pales in comparison to the effectiveness of the rule of law and a fair trial.

Protests are growing around the world to this form of warfare. Protests have recently been held in the USA, Yemen and Pakistan, where former cricketer and politician Imran Khan held the Pakistani government responsible for supplying intelligence to the CIA leading to the deaths of hundreds of civilians in such attacks in the past few years. One of the main criticisms by campaigners against drone attacks is the lack of transparency and accountability for these strikes.

Concerning Britain’s role, one of the demonstration organisers, Chris Cole, from Drone Wars UK, said: “It's an independent requirement of international law that there is public accountability over the military when they go to war and there is so much secrecy around this, that there isn't any accountability. We've asked the Defence Select Committee to hold an inquiry. There's been no response to that. We've asked a number of questions through MPs of the Ministry of Defence and of ministers. Most of those questions are refused but on the grounds of national security. So there is almost no public accountability for these strikes at all".

Drones are not remote control toys for Christmas; their effect is far more deadly and indiscriminate, a sci-fi nightmare become reality and getting out of control. The CIA recently revealed new bases from which it launches attacks in East Africa, from the Seychelles, Ethiopia and Djibouti. The use of the term “bug splat” by the US military to refer to casualties shows how cheap the lives of victims are considered, most often innocent civilians.

With respect to what the public could and should be doing, Mr Cole added, "I think that it's important that people wherever they are speak out against these drone attacks and to inform themselves. Lots of people don't really know what's going on but the UK has used drones over 200 times, drone strikes in Afghanistan, and we know almost next to nothing about the result of those drone strikes. We know the UK MoD has admitted one strike causing civilian casualties but that was only after a lot of pressure and freedom of information requests revealed that and we fear that many other civilian casualties have been killed. People should be calling for more information, to strip away the secrecy surrounding drone strikes and to call for the drones to be grounded, until we know much more information that can verify that civilians are not being killed in these drone strikes."

Campaigns dealing with this issue:

For new updates on the issue:

Report and pictures by A. Maniar