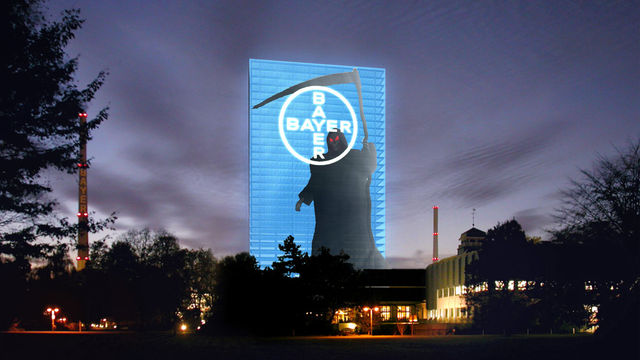 They are accused of violating more than 20 instruments of international human rights law through promoting reliance on the sale and use of dangerous and unsafe pesticides including endosulfan, paraquat and neonicotinoids.

The Permanent Peoples' Tribunal (PPT), an international opinion tribunal created in 1979, will hear expert testimony from scientists, medical doctors and lawyers to prove the charges. Victims who have been injured by these products - from farmers, farmworkers, mothers and consumers from around the world - will also testify to the causes and nature of their injuries.

The cases will be heard over a four-day trial in Bangalore, India beginning December 3. While the Tribunal has no legal weight, and cannot force sanctions on companies, it aims to expose and raise awareness of large-scale human rights violations.

Pesticides Action Network (PAN) International, a global network comprised of 600 organisations in 90 countries, has spent years collecting information to bring about the indictments and is seeking justice for more than 25 specific cases - such as Silvino Talavera, an 11-year-old from Paraguay who died days after breathing in a cloud of Monsanto's RoundUp herbicide sprayed by a crop duster. The trial will also hear evidence of the link between pesticide use and a decline in bees.

The corporations, known as the 'Big 6' control 74 per cent of the global pesticide market, as well as dominating the global seed market. Bayer reject the allegations saying they are a, 'wholesale distortion of the role of pesticides in our society.' Monsanto, Syngenta and Dow, after being contacted by the Ecologist, were unavailable for comment.

Pesticide poisonings
An estimated 355,000 people are believed to die each year from unintentional toxic chemical poisoning, according the World Health Organization, many of these from use or exposure to pesticides and other agrochemicals. Nick Mole from PAN UK said the trial would give a voice to the otherwise voiceless victims of pesticides.

‘The pesticide industry is massive and incredibly powerful. It is difficult to prove corporate manslaughter even when these products are killing hundreds of people a year,' he says. ‘We've spoken to people who have been abused and we are allowing them to give voice to their individual stories. We will be presenting the outcome of the Tribunal to the corporations and will be inviting their response,' he says.

It is hoped that the verdict, to be delivered on December 6, will lead to greater discussions at UN institutions on holding agrochemical corporations accountable for crimes relating to the impact of their products.

Peoples' Tribunal
The PPT grew out of the work by Italian Senator Lelio Basso, and serves as a grassroots, ad hoc court to consider charges and to issue verdicts on complaints of human rights violations submitted by victims or their representative groups.

Since 1979, the PPT has held 35 sessions exposing various forms of human rights abuses in cases from the Bhopal disaster, Tibet sovereignty and the intervention of the US in Nicaragua. By Matilda Lee

From 3-6th December 2011, the Permanent Peoples’ Tribunal (PPT) will convene in Bangalore, India, to hear cases brought against six multinational agrochemical companies who stand accused of violating human rights by promoting reliance on the sale and use of pesticides known to undermine internationally recognised rights to health, livelihood and life.

Known as the ‘Big 6’, the indicated agrochemical corporations are Monsanto, Dow, BASF, Bayer, Syngenta and DuPont. Collectively, these companies control 74% of the global pesticide market, making the pesticide/agricultural biotechnology industry one of the most consolidated sectors in the world.

The World Bank estimates that 355 000 people per year die of unintentional pesticide poisoning. “The aim of taking the Big 6 to the PPT is to give a voice to the otherwise voiceless victims of pesticides around the world who have suffered as a result of the relentless promotion of toxic poisons by these multinational companies.” Said Nick Mole, PAN UK Policy Officer.

Cases from the UK and Europe will focus on the loss of bees due to neonicotinoid pesticides developed and sold by Bayer; Graham White, a beekeeper said, “Bee losses in the UK and Europe have been catastrophic, with over a million colony deaths since 1993; there is a massive body of peer-reviewed scientific evidence from European universities, which indicate that neonicotinoids are having a lethal impact on bees and other pollinating insects. It is high time that the companies that manufacture these toxic pesticides are held to account for the damage they have done.”

Cases from the UK will also focus on the damage that has been done to the health of UK citizens by organophosphate (OP) pesticides, most notably sheep dips. In the UK many hundreds of individuals and their families have had their lives devastated by exposure to OP pesticides and have had no recognition or compensation for their suffering. “We hope that by taking these companies to the PPT we will raise the issue of OP poisoning in the UK and bring to the attention of the public and politicians the suffering that has been caused” stated Elizabeth Sigmund of the Organophosphate Information Network.

During the course of the tribunal, Pesticide Action Network will invite witnesses including scientists, medical doctors, and lawyers, to prove the charges through expert testimony on pesticides, genetic engineering, intellectual property rights, and other subjects germane to the cases at hand. The PPT will also hear testimony from farmers, farm workers, beekeepers, mothers, young people, scientists and consumers from around the world. The defendants will be served and summoned to offer their perspectives and responses.

Also under indictment are the International Monetary Fund, World Bank, and World Trade Organisation; these entities are charged with facilitating corporate concentration of power through their policies and programs. Additionally, the governments of Switzerland, Germany, and the United States – the home nations of six defendant companies – have been indicted for colluding with, and failing to regulate, corporate power. The verdict from the hearing will be given on 6th December.

Notes for Editors:
· Pesticide Action Network UK is the only organisation in the UK focussed solely on global pesticide issues
· A full copy of the charges against the Big 6 is available on request
· Biographic details of the PPT jury panel are available on request
· The World Bank estimates that 355 000 people die of pesticide related illness every year1
· The Permanent Peoples’ Tribunal was founded in 1979 and grew out of the work by Senator Lelio Basso of Italy. The PPT is an international opinion tribunal that aims to raise awareness of situations of massive human rights violations when such situations receive no institutional recognition or response. Starting in 1979, the PPT has held 35 sessions exposing various forms of human rights abuses through alternative judgements and legal articulations. It was created as an institution to compensate for the absence of access to justice for all people; where barriers to justice exist, the Tribunal serves as a grassroots, ad hoc court to consider charges and to issue verdicts
· Neonicotinoid pesticides have been implicated in the death of bees since they were introduced into agricultural use on the early 1990s
· In the EU honey bees play a key role in the successful production of 80 million tonnes of food every year - that is approximately 160kg of food per EU citizen
· In the winter of 2008/2009 around 1/5 of honey bee hives in the UK were lost
· In Germany in 2008 60% of their bees were lost
· In 1999 France banned the use of the neonicotinoid based product Gaucho after the loss of 1/3 of French honey bees
· 1 World Bank, World Development Report 2008: Agriculture for Development (Washington, DC: World Bank, 2007)
· Other countries in Europe have banned or restricted the use of neonicotinoids including Germany, Italy and Slovenia.1 In Italy following the neonicotinoid ban bee populations have seen recoveries with greatly reduced bee mortality2
· Glyphosate, the active ingredient in the herbicide Roundup can cause birth defects even at very low levels. However, this information has been known and ignored by regulators and the manufacturers since the early 1990s3
· OPs are nerve poisons which kill the target pest (usually insects). Most OP pesticides are insecticides, although there are also a number of related herbicide and fungicide compounds4