Occupy London has taken over a huge abandoned office block in the borough of Hackney belonging to the investment bank UBS in a move it describes as a ‘public repossession.’ London, UK. 18/11/2011 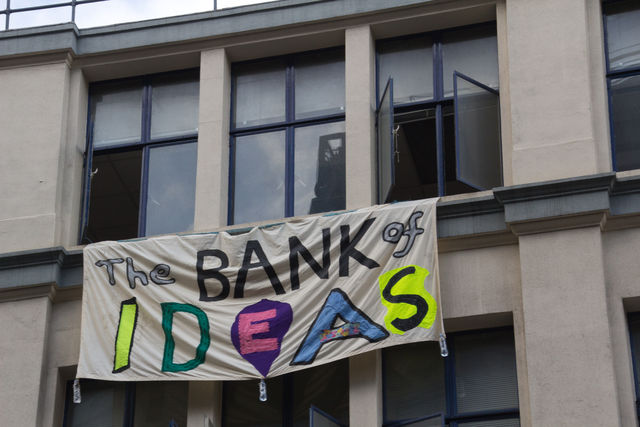 Occupy London has taken over a huge abandoned office block in the borough of Hackney belonging to the investment bank UBS in a move it describes as a ‘public repossession.’

Overnight on Thursday, a dozen activists from the Occupy London, campaigners for social and economic justice as part of the global fight for real democracy, gained access to the building and secured it, giving them a legal claim on the space.

The multimillion pound complex, which has been empty for several years, is the group’s third space and its first building, adding to its two camps at St Paul’s Courtyard – near the London Stock Exchange in the heart of the City – and at Finsbury Square (borough of Islington).

Occupy London supporters Jack Holburn said: “Whilst over 9,000 families were kicked out of their homes in the last three months for failing to keep up mortgage payments – mostly due to the recession caused by the banks – UBS and others financial giants are sitting on massive abandoned properties.

“As banks repossess families’ homes, empty bank property needs to be repossessed by the public. Yesterday we learned that the Government has failed to create public value out of banking failure. We can do better. We hope this is the first in a wave of ‘public repossessions’ of property belonging to the companies that crashed the global economy.”

The Bank of Ideas
The group say the space will be reopened on Saturday morning as the ‘Bank of Ideas.’ An events programme is being lined up, including talks from Palestinian activists, comedy from Josie Long and a session led by trader Alessio Rastani, who sent shockwaves through the media following a provocative interview on the Eurozone crisis.

Sarah Layler of Occupy London added: “The Bank of Ideas will host a full events programme where people will be able to trade in creativity rather than cash. We will also make space available for those that have lost their nurseries, community centres and youth clubs to savage Government spending cuts.”

The Bank of Ideas is a non-residential occupation – so visitors are asked not to bring their sleeping bags. Space will be free from drugs and alcohol from the start, as per Occupy London’s safer space policy.