Photos showing the fascist Greek deputy minister Voridis at his youth, carrying an axe during an assault against a peaceful demonstration of anarchist college students. 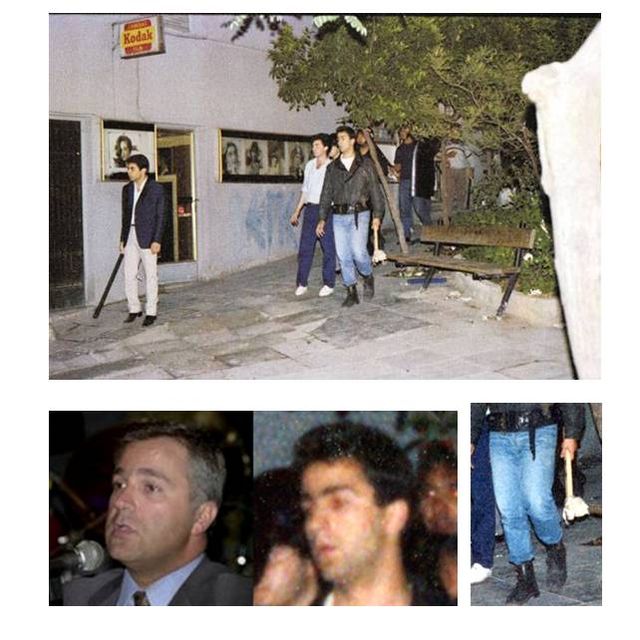 Nearly four decades after the end of the military dictatorship that ruled Greece from 1967 to 1974, the far-right nationalist LAOS party, dictatorship’s ideological heir, is for the first time participating in the (unelected) coalition government. Makis Voridis, a prominent member of LAOS, is appointed as deputy minister at the ministry of transportation, infrastructures and networks. In the photograph below, the now minister, a college student at that time, is shown proudly carrying an axe, during a melee against a peaceful demonstration of anarchist college students.

Voridis had been the secretary general of the EPEN party youth, a party formed by the imprisoned leader of the 1967 military coup, George Papadopoulos. In 1983 when in law school, Voridis formed his own nationalist student group called “Student alternative”. In 1985 he was excluded from the association of law students, as its founding principles forbid “fascist activity”. Two months later, in the 12th of May 1985, Voridis was seen carrying a D.I.Y. axe during an attack against a peaceful demonstration of anarchist students. One year later, the Greek university student association (E.F.E.E.) pressed charges against Voridis for his participation in the assault, without succeeding in convicting him. In 1994 he founded the nationalist “Greek Front” party which attracted ultranationalists, EPEN and ENEK (a splinter group of EPEN) former members. Voridis maintains close personal ties with the French nationalist Jean-Marie Le Pen and his “National Front” party. In October 1997, Voridis’ Greek Front hosted the “European Nationalist Congress” a congress where besides “National Front”, the nationalistic “Flemish block” and Spain’s “National Front” also took.
In the greek national elections of 2000, Voridis became a candidate seeking election in the parliament for the first time, under a common bid with the “First Line” party led by the neonazi Kostas Plevris. In 2005 Voridis dissolved the “Greek Front” which was then absorbed by LAOS, the nationalist party which is currently participating in the tri-party coalition government. In 2007 as a member of LAOS he was elected in the greek parliament for the first time.