Occupy Cardiff is Back! Get on down there.

I saw Clayton Blizzard doing his stuff at a pub in Bristol last night and was inspired to action.

http://claytonblizzard.com/. Economics 101 (The Natal Lottery) did it for me: "Change doesn't trickle down to us; it rises up like dust so stamp your feet!"

So I diverted a bit on my journey back up north and spent a few hours this afternoon at the new Occupy Cardiff site outside the Unite/PCS union offices, Transport House, 1 Cathedral Road, Cardiff CF11. 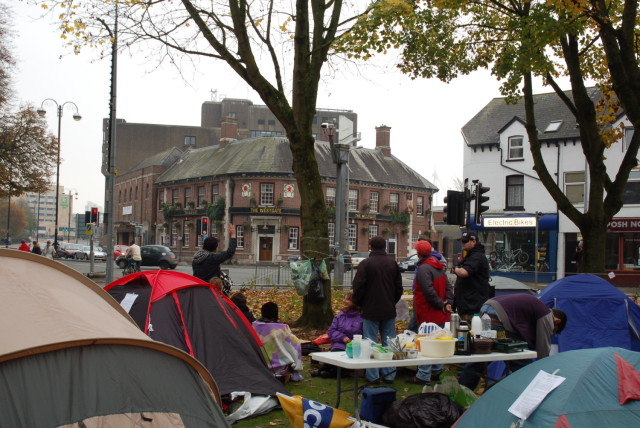 support from passing traffic at the junction 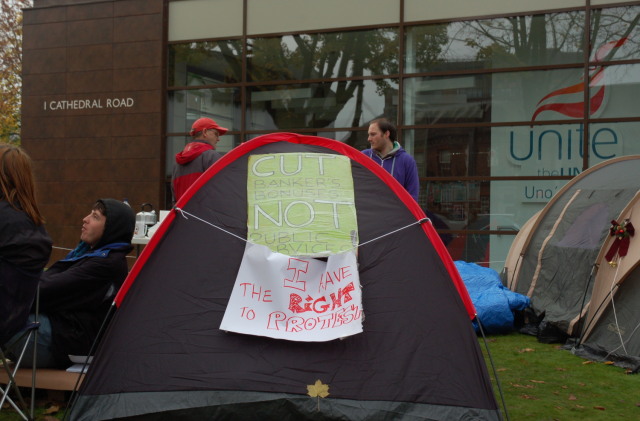 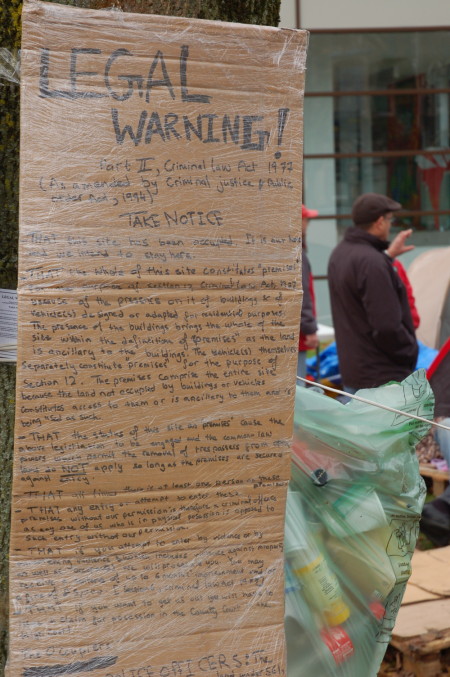 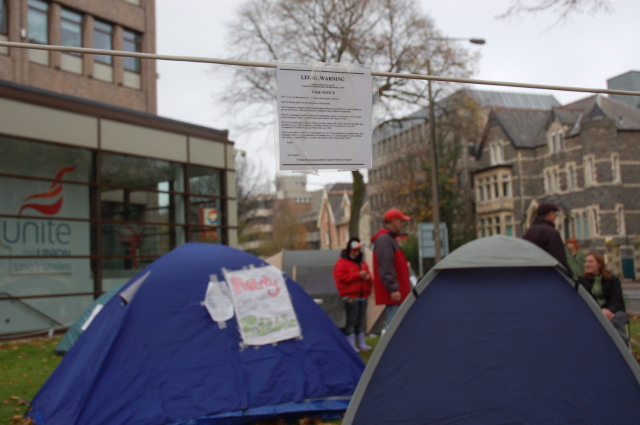 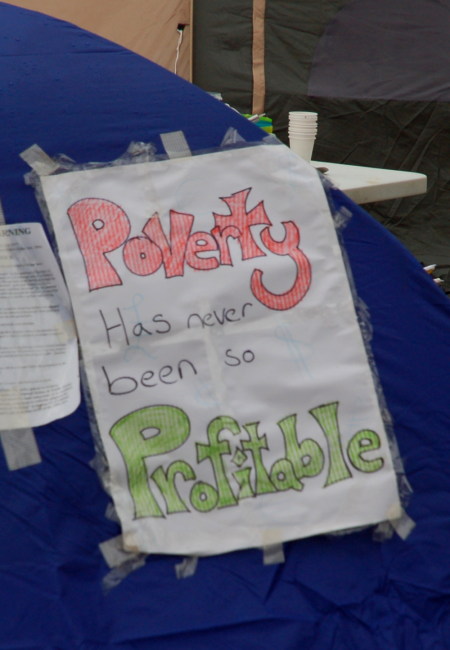 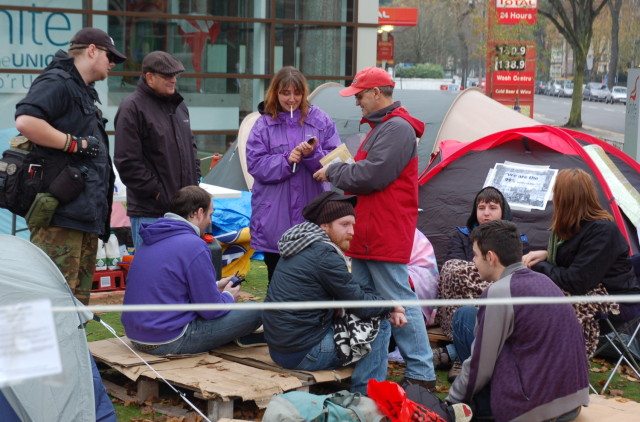 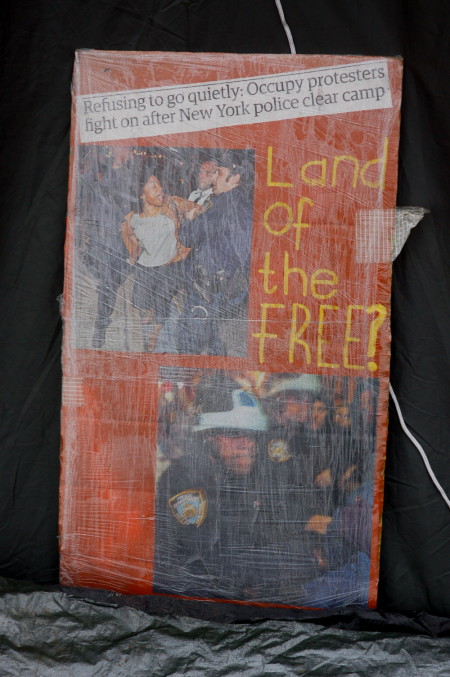 land of the free? 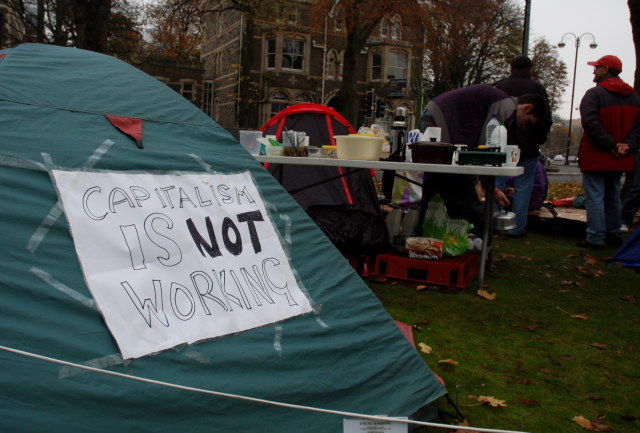 capitalism is not working

THE STORY SO FAR

Occupy Cardiff has had a hard time getting established and people are still pretty sore about Cardiff Council's behaviour and the behaviour of one councillor Neil McEvoy in particular. The Plaid Cymru Deputy Leader of the Council has managed to upset a lot of people both during and since the occupation of the previous site at the Castle a week ago last Friday.

When the first camp was set up, Cllr. McEvoy turned up and tried to persuade the occupiers to move to another site; as soon as they had declined this option, he handed over to the council's Chief Officer for a pre-prepared speech withdrawing the council's support for the occupation and quoting some ancient by-laws allegedly being broken. This was all the cops were waiting for and they immediately moved in with threats of arrest and prosecution, going on to attack and break up the camp later the same night. Since then, McEvoy was ejected from an Occupy meeting in the Owain Glyndwr pub after he branded those involved in the occupation 'extremists'.

I understand that the green alongside the Castle is public land and the by-laws over which four activists have now been cautioned and two are still facing charges pre-date the donation of the land to the people of Cardiff. It was clearly not a good use of public money or an example of proportionate policing for riot cops with tasers to attack and trash the camp, intimidate and arrest people and force a peaceful occupation off the land. Scrabbling round for excuses, there have been unsubstantiated allegations about damage to the castle walls. Just remember that we've only now learned that Mark Duggan probably didn't have a gun at all.

Not satisfied with this bit of repressive policing on behalf of the council, the cops were out in force again yesterday on Cardiff's streets, interfering with people's right to peaceful protest, threatening arrest if banners weren't folded up, trying to stop people walking around because a march hadn't been notified to them and being generally obstructive and obnoxious.

The cops might like to reflect on the words of retired Philadelphia Police Captain Ray Lewis, who was arrested in New York City while taking part in nonviolent protest in support of Occupy Wall Street. He said:

"All the cops are just workers for the one percent, and they don't even realise they're being exploited... They complained about the park being dirty. Here they are worrying about dirty parks when people are starving to death, where people are freezing, where people are sleeping in subways and they're concerned about a dirty park. That's obnoxious, it's arrogant, it's ignorant, it's disgusting."

After long and difficult General Assemblies and an afternoon of 'cat and mouse' with the cops, a slightly out-of-city site was taken yesterday on the grass in front of the Unite Union building (also home to PCS Union and the Welsh Labour Party). Unite has since given its blessing to the occupiers' presence there and offered use of facilities. Although not right in the middle of the City, the site is only a short walk from the Centre and is on a busy road junction. The number of car and bus drivers beeping and waving as they passed today was very encouraging.

So far, the occupiers have not taken up the Archbishop of Wales Dr Barry Morgan's generous offer of use of the centrally heated Llandaff Cathedral

http://www.bbc.co.uk/news/uk-wales-politics-15778206 on the grounds that it's too far from the City centre. However, as the weather gets colder and numbers of occupiers swell, it may well be a useful back-up site for a more central main occupation being only a short commute away from the middle of Cardiff.

The occupation may well take an additional or alternative city centre site in the coming days or weeks.

Around 20 people in total were at the site today during the time I was there, with quite a bit of coming and going as people arrived with supplies and others went off in search of various missing essentials. The mix included variously and not exhaustively students, mums, dads, the uncle of one of those arrested last week, anarchists, trade unionists, members of the Communist and Socialist parties and Plaid Cymru, as well as a Dutch/South African couple who'd arrived in Wales for a holiday and found out about the occupation by chance. Small and intimate in contrast with the sprawling randomness and vibrancy of Occupy LSX at St Paul's, the atmosphere was just as welcoming and positive. This beginning of an occupation and seedbed of ideas and creativity looks set to grow and thrive, building participatory community in Cardiff to challenge the crisis that is capitalism.

YOUR SUPPORT IS NEEDED

The occupation desperately needs more people to sustain it. Some of those involved in the Castle eviction are still traumatised by the experience and not yet ready to camp again. A strong turn-out makes things easier for everyone and will encourage others to join in, so get along there if you can.

Food, camping essentials, bedding, banners and other donations would be much appreciated.

The occupation is being supported by Cardiff's new squatted social centre, the Red and Black Umbrella in Clifton Street. It's all happening in Cardiff. If this is your community, then don't miss out. Get involved.