The flyer reads: "You may have noticed we've moved into the old Tredegar Hotel [on Clifton Street], so we thought we'd introduce ourselves. We are the Red and Black Umbrella Collective and intend on turning the abandoned pub into a social centre. We believe people should come before profit. We are sick of government cuts that affect us while MPs and bankers get richer. David Cameron wanted a big society and we're going to give him one. We are currently renovating the pub and want to provide a cultural hub for the local community..."

the red and black umbrella collective 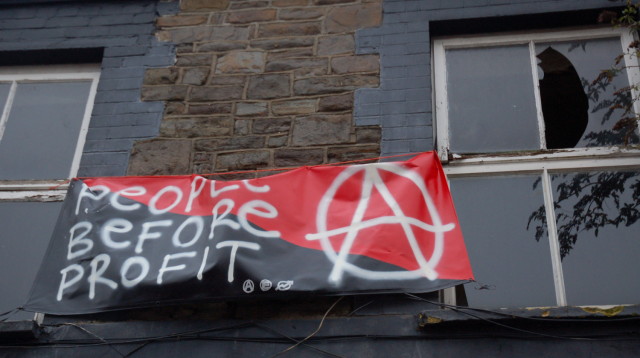 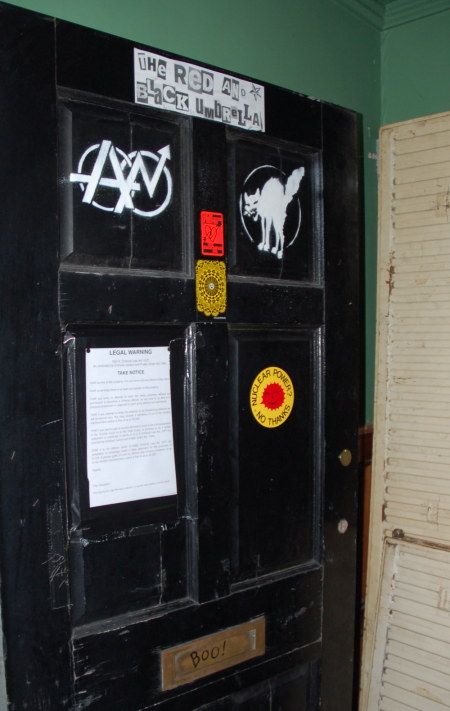 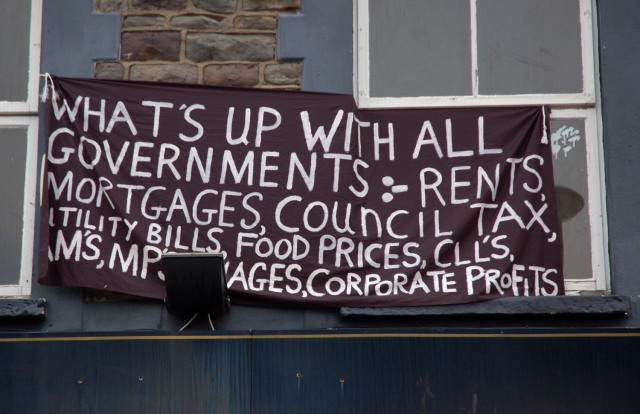 just a few of our problems 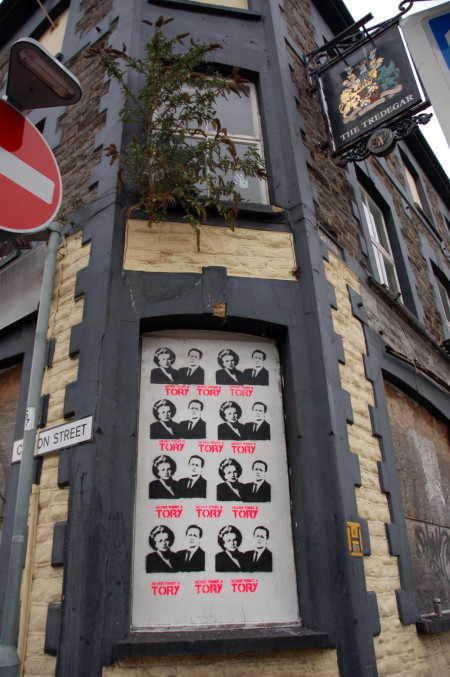 Catching up at the weekend with some of the now homeless activists recently evicted from the factory social centre in Bristol, someone mentioned a new social centre just opened in Cardiff. I had decided to stop off in Cardiff on my way home in any case to visit the new occupy site

https://www.indymedia.org.uk/en/2011/11/488891.html; afterwards I headed off to the same road where the sadly long-gone People's Autonomous Destination (PAD) had been, Clifton Street, to see for myself what the Red and Black Umbrella is all about.

Although the building has been occupied for several weeks, the Collective has spent most of that time making it habitable and doing essential repairs, so Saturday was - serendipitously - their 'official' opening day. I was greeted by a gang of friendly, smiley people outside. Inside, they were serving free (or for donation) hot drinks, with a range of delicious vegan cakes spread temptingly along the bar. There's a friendly pub feel to the venue, in semi-darkness on account of the sitex on the windows (replacing the previous plywood which had shut out all light). A well-stocked info table stood just inside the door and a screen had been set up in the far corner to show a 'squatumentary' about squatting in the US. There was going to be live music later provided by Cardiff musicians Cosmo and Gail, but I wasn't able to stay for this.

"We encourage participation, and want to use the building to its full potential. We are against chain pubs, and posh flats which seem to be taking over our city and our communities. We are offering something completely different here in Clifton Street and the best thing? It will all be free!

"If you want to learn something, let us know and we'll try and find a teacher! If you have a skill, and would like to share it, come and do a workshop!

"We want to create a safe and welcoming environment for everybody. The social centre will be a drug and alchohol free zone, for people to come together, share skills and ideas, meet new people, make art, watch films and learn new languages."

Since occupying the building, the Collective has had to deal with various intrusions, from the owner smashing windows at the back in an ultimately successful attempt to start a dialogue (but please don't try this at home, folks), to cops threatening to batter down the door unless allowed in, to firemen turning up to try and put out a small, controlled bonfire in the back yard.

Collective's response to the cops:

"On Halloween, police turned up to the Tredegar Hotel and attempted to smash down our door. the did not identify themselves as police. We asked them to stop, and put a legal notice [out] through the door for them to read. It explained that we are squatters and are living here, and it is illegal for anybody to break in. Allegedly, somebody had reported a burglary at the hotel; we assured them we weren't burglars - far from it! We are looking after and renovating this building, but they broke the locks on our door and entered our home illegally. They ignored the legal notice we had given them and we have the whole incident recorded on video. We are considering taking legal or alternative action. The notice states that there is at least one of us in the building at all times, and if someone is to break in they could be faced with 6 months in prison, or a £5,000 fine."

There are loads of plans for using the space.

Cardiff Food Not Bombs will now be cooking there fortnightly and there are ideas about other possible Food Nots: Food Not Borders; Food Not Bailiffs?...

Prisoner Support will meet weekly to write solidarity letters and plan other solidarity with those in prison.

A People's Kitchen will serve hot meals made with skipped food for donations.

Food will be donated to Occupy Cardiff. Dozens of veggie burgers were made by the collective for the Castle occupation before its untimely end. Now the occupation's back, expect more of the same.

There are also plans for film and discussion nights, skill shares, workshops, live music and more.

Everything free or for donation. No one turned away through inability to pay.

As I was leaving, someone handed me a copy of a zine, issue 3 of 'Fuck off Facebook', and assured me he'd passed on copies to Occupy Cardiff, which seems to be pretty exclusively organising on the social spying site. A great publication reporting on a summer tour of Europe on a shoestring, taking in the best alternative sites/sights: Spain's Nowhere festival, Valencia's street art, Rainbow Valley in Andalucia, Rome's anarchist scene, Slovenia's anarchist scene and more. With full page anti-adverts for Coke and Colgate.

LAST WORD FROM THE RED AND BLACK UMBRELLA COLLECTIVE

"The social centre is for everybody to be a part of. We hope you will join us. If you have any concerns, questions or suggestions please call or text us on 07748 385375, email us at

theredandblackumbrella@hotmail.co.uk or come and say hello and knock on the door! See you soon!"

Yeah. Great to see such exciting things happening in Cardiff. Get yerselves down there.

any chance of "fuck off facebook" zine being available online?

..I'd be well interested in knowing how to get hold of one of those zines too ; )

There's no indication that this zine is available online anywhere, but if you contact the social centre maybe they can put you in contact with the people who put it together.