This evening, on Tuesday November 22nd 2011 in a lecture hall on the Cambridge University Sidgewick campus, battle lines were well and truly drawn, as David Willetts, one of the architects of the demise of our Higher Education system dared to show his face in public at Cambridge University, that, by his own doing has been manoevered into raising it's tuition fees by up to £9,000 per academic year. 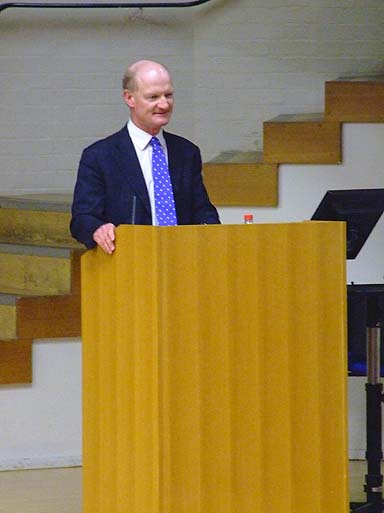 Mr.Willetts takes to the podium at Lady Margaret Hall... 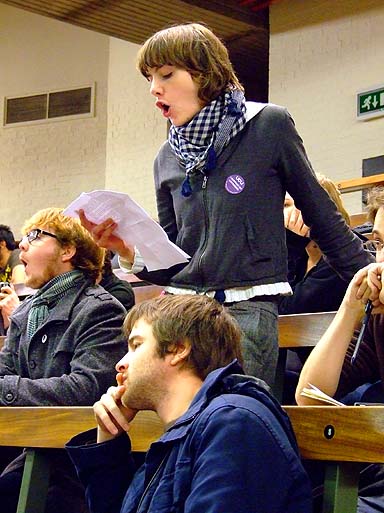 ...To be promptly silenced before uttering a word! 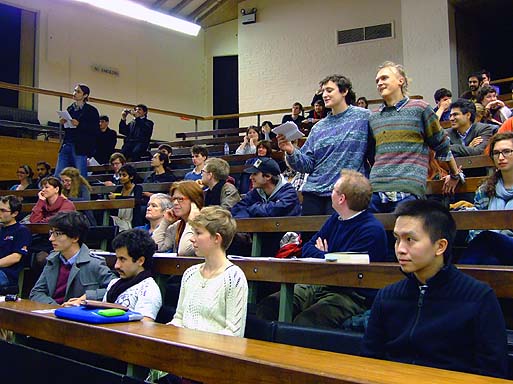 Reading the same speech in unison! 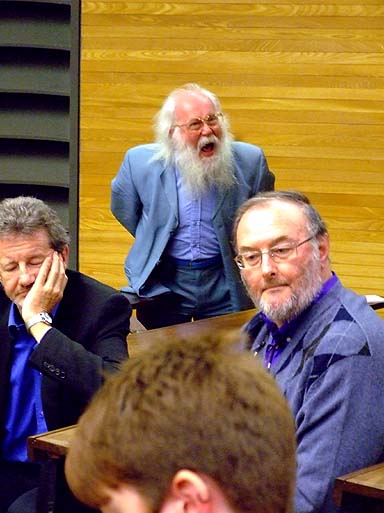 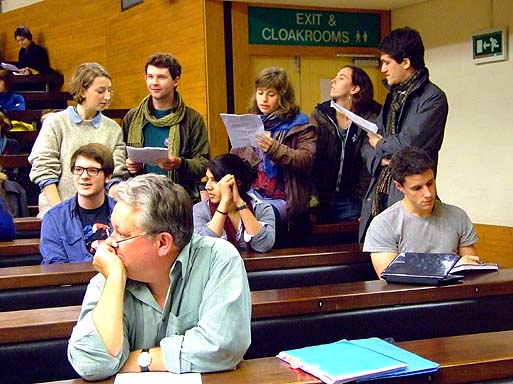 The speech goes on... 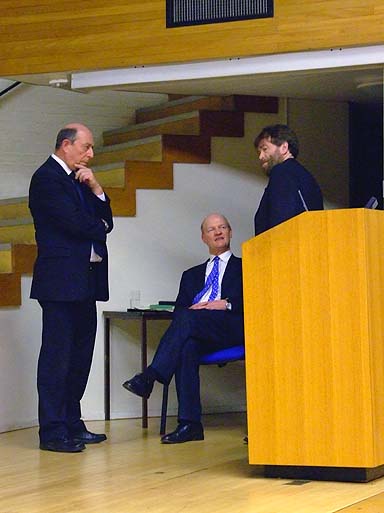 Mr.Willetts, unable to get a single word in, retires from the podium. 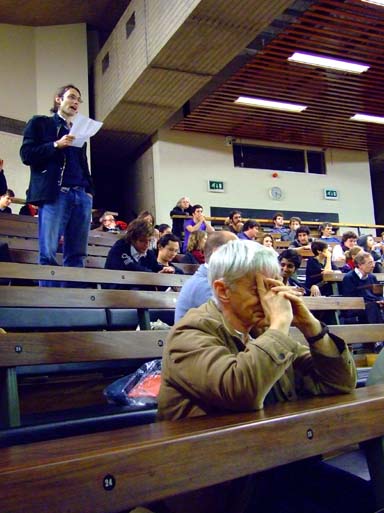 It's all too much for some. 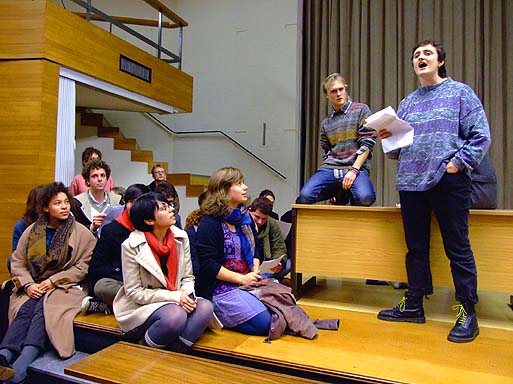 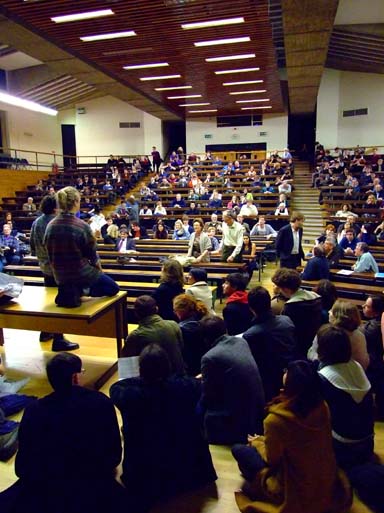 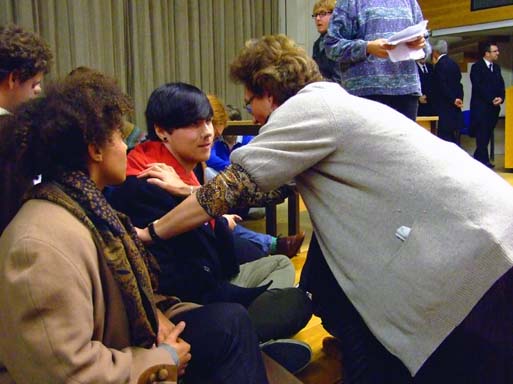 This lady was upset about her night out being spoilt. 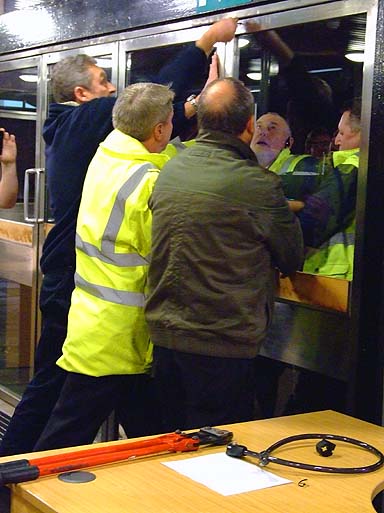 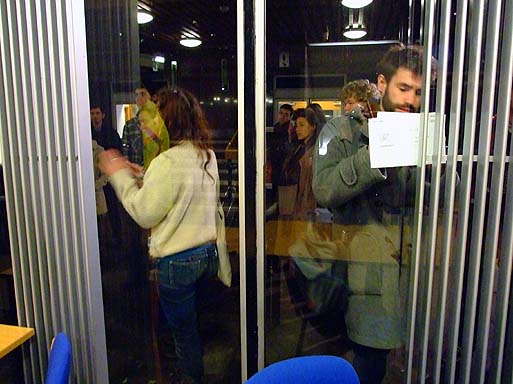 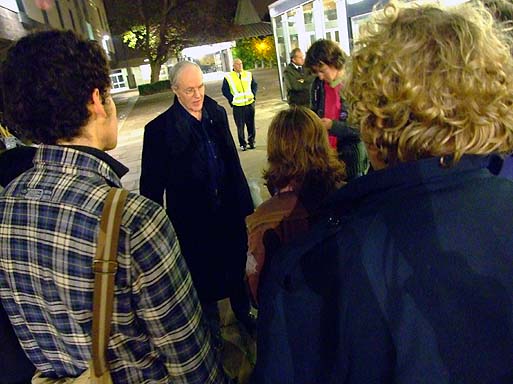 It was always going to be a contentious meeting of minds.

On the one hand, a minister who seems to think it's OK for people who wish to better themselves with an education should be forced into vast amounts of debt in the process, on the other hand, activists who are daring to stand up and make their voices heard against the government's ongoing programme of dismantling one piece at a time all that which our ancesters faught so hard to achieve.

A welfare state, higher education access for all, regardless of your income or social background, a National Health Service that doesn't leave people bleeding on the kerb because they forgot to carry their insurance book, public libraries with free internet access, bus services to and from villages, youth clubs, social housing and more besides.

Yes, Mr.Willets for one night only symbolised the advance of market forces entering all these domains ('survival of the richest' if you will), and the voices of dissent were for once heard loud and clear, and for once he didn't get to utter a single syllable.

As soon as the geust speaker at Lady Mitchell Hall took to the podium and his name was announced, a massed chorus of another kind of prepared speech was struck up in unison across the whole hall, and what a remarkable sight and sound it was too - as supreme an act of collective culture jamming that I ever saw!

David Willetts, this wrecker of hundreds of thousands of lives, was just this once rendered utterly impotent.

All he could do was stand speechless at the podium, in the face of this act of creative, collective dissent by people who are sick of being treated like units of production rather than thinking, intelligent Human Beings.

All Mr.Willetts could do after standing there upstaged on a stage, was skulk off again into the night, his own plans to have a (no doubt) carefully choreographed propaganda session completely scuppered.

Of course, this is also the mark of a man who does not want to be held accountable for his own decisons, as he could have stuck around and taken the flack, taken it on the chin, but he chose to walk out, leaving the protestors utterly in control of events in the hall, despite a few hecklers who were upset that 'their' meeting had been disrupted in such a rude way.

After Mr.Willets had disappeared, the Defend Education activists then occupied the stage and continued their ongoing, unending collective speech, while the hall emptied of other visitors.

There was a brief activist meeting on the stage in hushed voices (I shall not report what was discussed), by which time I'd heard that building security were trying to lock us all in, and my bag was still in the lobby, so I left to retrieve it, and found I was indeed locked inside for a few minutes, although security did let me out a few minutes later (to join a small group of people who had beseiged the front door of the lecture hall), and I saw no reason to make an issue of it at the time, as my grievance was not with them but with the man, who like a true coward had disappeared into the darkness a few minutes earlier.

Roughly ten minutes later, the rest of the Defend Education activists left the building, their mission to make their voices heard accomplished, and the debating continued in front of the lecture theatre for a few more minutes, first with the Head of the English Faculty (who seemed to have some agreement with the activists), then with a few other passersby who needed to be convinced of the merits of protest, before we all went our separate ways into the night.

This will certainly be a visit to Cambridge University that David Willetts will not forget in a hurry.