'No platform for filth, whilst students sit in prison'

Sir Ian Blair, ex Commissioner of the Met Police was meant to give a talk at Sussex university last night, but students disrupted it - see the report below. 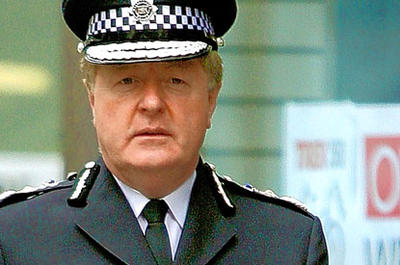 It was pretty hectic. Students linked arms blocking both the back and front entrances, with security resorting to physical confrontation. About 40 attendees managed to get in, some people from as far as London were turned away. During the talk students scuffled with security at the fire exits, banging on the doors, with chants being heard loudly in the lecture. A megaphone on siren function was also placed against a external air vent. One student did manage to get in through a fire exit, but was caught and held by security for 10 mins or so (sat on a chair in the locked down building). During the lecture a couple of students already in the lecture confronted Blair, hissing and heckling throughout. Best chant was 'No platform for filth, whilst students sit in prison'

Blair is the former metropolitan Police Chief Commissioner. He is the man who wanted to be able to detain suspects for 42 days without charge. The man who was in charge during the era of stop and search which disproportionately targeted ethnic minorities and has subsequently been deemed illegal by the European Court of Human Rights. The man who was in charge when Jean Charles De Menezes was killed. The man who had the tenacity to ask for a £25,000 bonus in addition to his £200,000+ salary during the period that included De Menezes' death.