Workfare to be challenged in the courts.

Workfare is a programme whereby anyone who has been claiming Jobseeker’s Allowance (JSA) for 6 months can be sent to work for major multinational companies like Tesco, Poundland and Sainsbury’s for up to 5 weeks in order to keep their benefits. Now a legal challenge under human rights legislation is being brought against the scheme.Tessa Gregory of Public Interest Lawyers, who are representing Jonathan Shaw from Birmingham, said, “This Government scheme of forced labour unlawfully exploits individuals. The only beneficiaries are participating companies, who get their workers for free.” 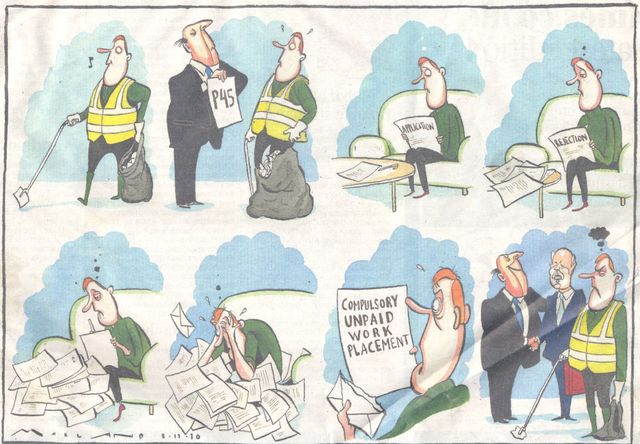 News of the legal action was broken in The Guardian

http://www.guardian.co.uk/society/2011/nov/16/young-jobseekers-work-pay-unemployment, along with stories from jobseekers who had been on workfare schemes at companies like Tesco and Poundland, whilst Corporate Watch

http://www.corporatewatch.org/?lid=4111 have exposed TK Maxx, Matalan and others as taking advantage of the scheme.

http://www.boycottworkfare.org/, a group campaigning on this issue, welcomed news of the legal action: “Workfare undermines human rights and the minimum wage, whilst once more boosting the profits of big corporations. It doesn’t make economic sense and we look forward to seeing the government’s plans exposed as not only unjust and immoral, but illegal.”

This is nothing new. Under Labour, Flexible New Deal had workfare components, and similar schemes occurred under Thatcher. This time though the coalition have gone a step further and stripped away the funding for training that was usually attached to work experience-type schemes in the past. This means that only large companies with unskilled work will take part in the programme – smaller companies could not bear the cost of training someone to do a semi-skilled position every 4 or 5 weeks, and larger companies will not. The scheme itself is indiscriminate and it will catch many for whom it has no relevance at all. What is the value for someone with a trade, or years of experience in an office or factory, of a month of stacking shelves?

Supporters of workfare say that it will help jobseekers back into work and claim that there might even be a job at the end of it. However, the opposite of this is true. Workfare undermines paid positions by providing labour that is free to the companies using the scheme. Why would a company hire an extra person when they have people on workfare placements?

The ultimate paradox of workfare is that because they are unpaid positions, companies have to say that these are not jobs that the company needs doing. This means that there is no possibility of someone being taken on to do the job they’ve just got experience in, because if a company did, it would mean that they had broken the rules of the scheme by placing a jobseeker in a job that was required by the company.

This government is systematically attacking benefit claimants, aided enthusiastically by an ongoing campaign of scapegoating claimants in sections of the media. If you are unemployed you are lazy, and told anyone can get a job if they try – despite there being just 327,000 vacancies to go round between 1,500,000 JSA claimants

http://www.nomisweb.co.uk/reports/lmp/gor/2092957698/report.aspx. And that 1.5million figure doesn’t tell the whole story – 2.5million are unemployed (not everyone can claim JSA), and there are more than 9million people who are economically inactive.

The levels of unemployment we see today are not the result of laziness, or a welfare system that is too comfortable to live on, it is the result of 30 years of neo-liberal policies that are directed towards big business and economic focus on inflation and interest rates, rather than full employment.

Ultimately unemployment is the result of the capitalist system that uses the army of reserve labour to keep wages low. Workfare represents the ultimate expression of that use, with business paying absolutely nothing towards the wages, and no doubt looking to shed paid positions where they can. And it is the most vulnerable who will be most strongly affected – it is only unskilled positions that can be performed on workfare placements, so the threat to jobs comes to minimum wage employees first, and management never.

And it is the taxpayer who is supposed to bear the cost of the scheme – paying to allow companies to make more profits, for even bigger wage bills for their executives. We are undermining our own jobs and pay, and handing over wages of cash to the bosses at the same time.

How long will it be before we start hearing of people who have lost their jobs and then been told by colleagues that they have been replaced by people on workfare? When will the first scandal break of a Poundland or Tesco whose entire team of shelf-stacker's are there on workfare programmes?

We need to take action on this. A legal challenge is one thing, but we can also campaign for companies involved to withdraw from the scheme. December is a month of action against ATOS and benefit cuts

http://benefitclaimantsfightback.wordpress.com/2011/11/13/a-month-of-festive-action-against-atos-and-the-benefit-cuts/. As part of that you could draw attention to workfare, or start a local group to campaign against attacks on benefit claimants and call for welfare not workfare.