A brief report of the march for pension justice in Swindon 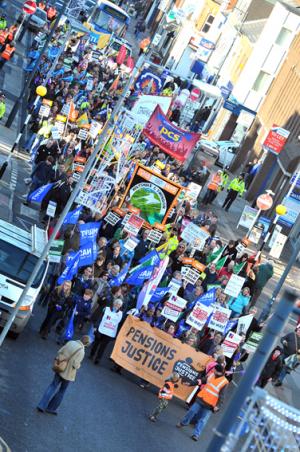 Today saw 1000 people take to the streets of Swindon as part of the N30 day of protests and industrial action. The massive crowd was in a militant mood, most of the chants being directed against the tories, rather than just in defence of pensions. Swindon Anarchists taking part distributed anarchist literature, and spent the weekend before the strike plastering town with posters calling for united working class action to bring down the tories.
When the march ended, a range of speakers adressed the striking workers. The loudest cheers and applause went to those supporting the occupy movement, student movement and Egyptian revolution as well as those calling for us to topple the tories. The local Labour ex-MP Ann Snelgrove got a distincly luke-warm reception as well as a few heckles as she spent a few minutes trying (and failing) to present the Labour party as a credible alternative to their buddies in blue ties.
All in all a great day for workers in Swindon and from the looks of it, across the UK. The task now is to build on this solid strike, escalate the action and stand up not only for public sector pensions, but against a cabinet of millionaries and Eton toffs and their vicious regime of cuts.

A 10-minute montage of footage from the march and rally, interspersed with some photos: