#OccupyLSX had announced an action at 3pm at Piccadilly Circus. They set off with the samba band and minutes later a flare was set off inside Panton House, Haymarket, whilst a banner was hung from the roof. Outside protestors challenged some plainclothes cops in the crowd, after which a 'bubble' or kettle was set up, apparently with more plain clothes cops trapped inside it.

See report from Occupy SLX below. 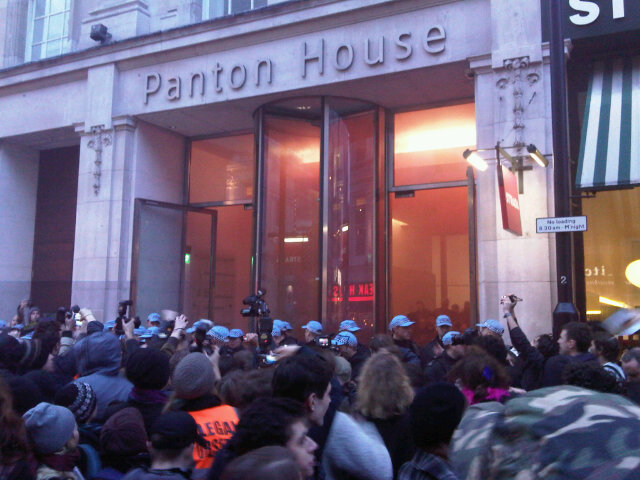 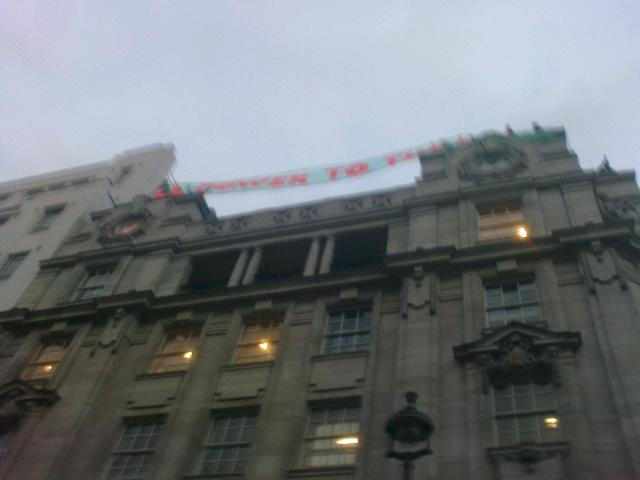 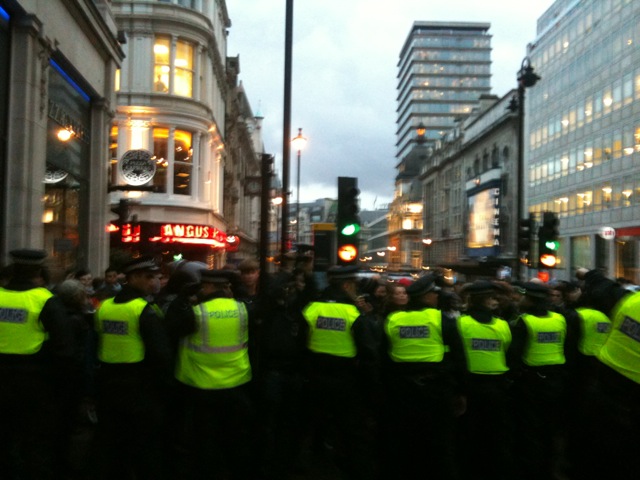 Occupy London – part of the global movement for social and economic justice – today highlighted the corporate greed endemic in the UK and called for a change within society.

About 60 protestors gained entry into the offices of mining company Xstrata, a ‘leading light’ of the FTSE 100 and British industry to highlight the fact that CEO Mick Davies was the highest compensated CEO of all the FTSE 100 companies in the last year, when his companies had losses and the economy collapsed. He received £18,426,105 for his efforts. [1]

Led by a samba band to the building from Piccadilly Circus, the protesters entered the HQ at 25-7 Haymarket, London, with the protesters chanting against the corporate greed of Mick and other executives, in support of all those striking for fair pensions for all today. The protestors also unfurled a banner saying “All power to the 99%” from the roof top.

There are currently about 20 protesters inside – being held down on knees, of which many are women. There are a few hundred people kettled outside.

The protesters today are making the connection between the slashing of private and public sector pensions, while supposed ‘top’ executives cash in by increasing their own pay levels, leaving many without pensions. These CEOs like Mick Davies lavishly secure their own futures while ignoring the security and wellbeing of their own workers.

Karen Lincoln, supporter of Occupy London said: “Mick Davies is a prime example of the greedy 1 per cent, lining their own pockets while denying workers pensions. In this time when the government enforces austerity on the 99 per cent, these executives are profiting. The rest of us are having our pensions cuts, health service torn apart and youth centres shut down.

“We refuse to stand by and let this happen. We call on others to join us in the fight for a more just society. Today we have taken this to one of the offices of the 1 per cent. This is only the beginning. Come and join us on 15th December for Occupy Everywhere.”

Highest paid executives in the FTSE 100:

https://twitter.com/#!/OccupyLSX ; hashtag#occupylsx. Twitter for the new Finsbury Square site is

It's cruelty putting folks on knees. I've never been made to be down on my knees in a kettle.

I've only had cups of tea out of kettles.

Anon, read it carefully - it was people inside the building who were made to get on their knees (though why it's mentioned some of them were women is bewildering and sexist). The kettle was outside.

Nonetheless, well done folks. It's great that Occupy isn't just being in tents - though being an open access point for people to get involved in politics is good too - but also taking the struggle to the doorsteps of the companies and individuals who trash people and planet.

We live under free market capitalism, right.
So these peoples waged must be dictated by market conditions.
If they get paid so much, it must be because they are worth it.
Mick Davies must be doing 778 times the amount of work than the average worker or the free market wouldn't pay him so much, right.
Wages commensurate to wages, that's fare isn't it.

If you don't think so, lets smash free market capitalism and build a rigged market instead.