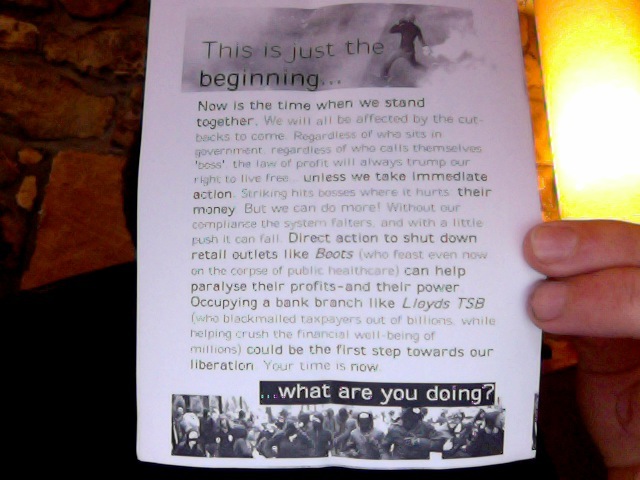 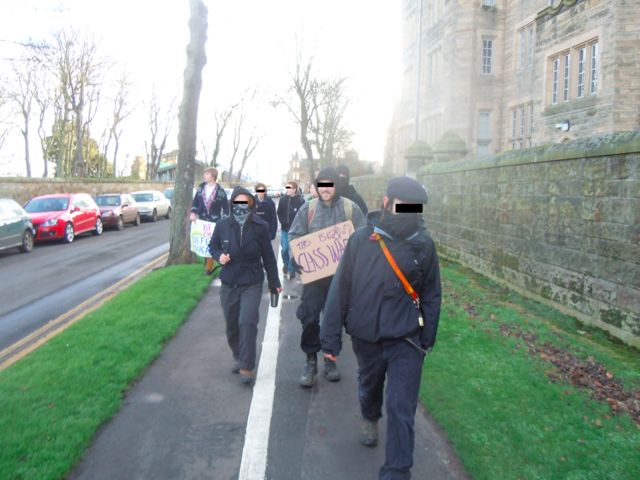 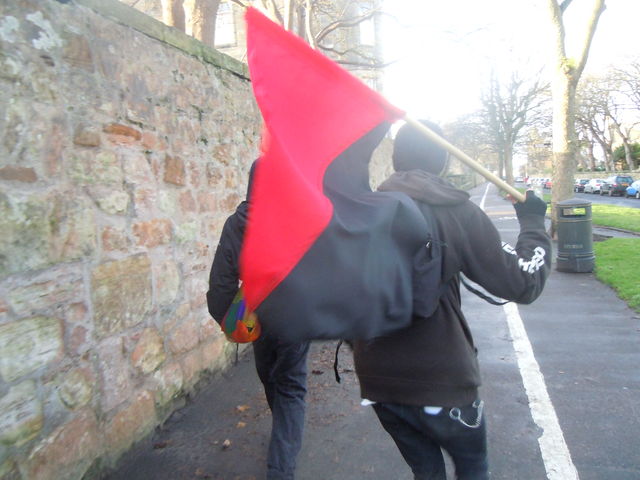 come fly with me, let's fly away! 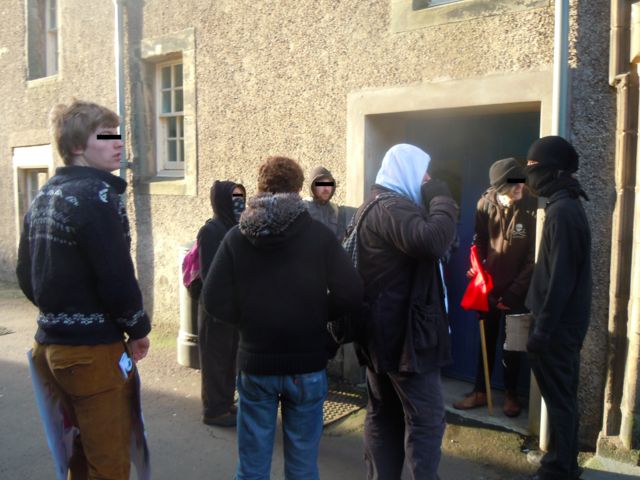 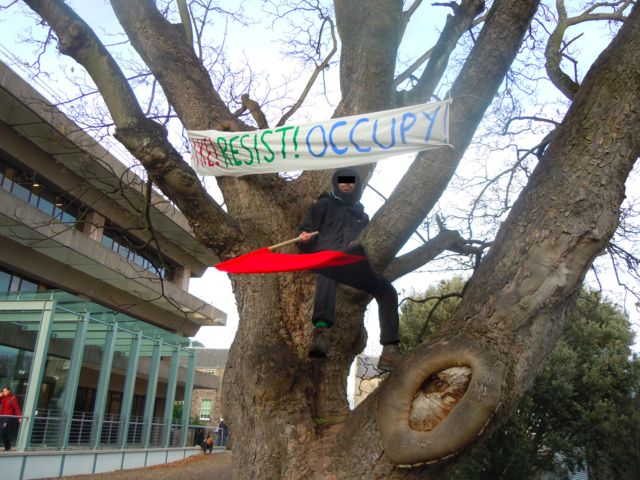 Anarchists love solidarity; it's our weapon and it's praxis. When workers go on strike, even if organised by organisations we oppose, we will always stand by them. We do this because we refuse to elevate the status of 'the worker' to that of prime importance but we do it because we seek to have all of us reify the oppression before us. Workers everywhere face oppression through wage slavery and the relationship with their boss. Striking workers openly challenge this, even if only for a day they throw off the worst of the shackles of capitalism, and openly resist on the picket lines.

Anarchists in St. Andrews join in their resistance and we should display this. It was for this reason we decided to visibly display our solidarity by forming an anarchist bloc for the first time in St. Andrews.

We acquired materials for our bloc and spread the proposal of a bloc through word of mouth in the week leading to N30. Some of us dressed in black and some of us covered our faces but all of us sought to exemplify a spirit of resistance throughout the day to challenge and subvert power relations.

During the pre-demonstration gathering, as talking-heads preached, we chalked messages of support all over the ground. Some of our messages were in explicit support of the predominant liberal aims - 'We Are the 99%' - and some expressed the messages we stand by, i.e. 'All Governments Cut.' We disseminated our own propaganda, to compliment the work of Trotskyist organisations like the visible Socialist Workers Party, encouraging demonstrators to take part in direct-action throughout the day.

As demonstrators began to march we took it upon ourselves, much to the displeasure of trade unionist organisers, to open up the confines of demonstrating by spurring demonstrators to march on the street and not the pavement. Such was coupled with some particularly loud shouting which was beautifully echoed by students and staff alike.

As we approached banking institutions on the march route the mass triumphantly chanted against them but attempts to encourage moving the demonstration inside the bank was rejected by the larger dmeonstration. Instead, the march approached Younger Hall to wait and congratulate graduates leaving their graduation ceremony. As the march came to a halt and waited outside we took the time to encourage other demonstrators to join us in causing a raucous and challenging the University for the day.

As expected, some of our friends and comrades joined us for a day of scaring the University by giving the general impression of impending disruption to graduation proceedings. As the march applauded graduates from the centre of the demonstration the confines split off as a group of ten ran down a side alley, black and red flags waving and long hair blowing in the wind.

What happened from then on in was an intentionally empowering and humorous game of cat and mouse with Police, University Security and scumbag private security. Make no mistake, we were the 1% this time - sprinting across University grounds, approaching officials and sneaking into forbidden areas is not the activity of the majority. It's the sort of activity taken by the radicalised.

Following in the wake of six occupations in the past year in our town the University management took every precaution to hamper any demonstrating on University grounds. The main academic quad was surrounded by gates and guards and every major University building suffered a similar insult. Knowing we were not numerous enough to break these fences and pass their lines we decided to grant them the strong impression that we could. At every opportunity we attempted to run through those stupid ancient doors of power which subsequently freaked out University security. When we couldn't enter the Principal's garden we scaled the walls and when with some failed attempts we simply ridiculed the security presence. After every attempt, we raised our flags and masks and darted down side streets only to return again minutes later. For many of us it brought back beautiful memories of recent demonstrations in London and the capitals of our respective home countries. Of course, as every door was slammed in our face and panicked messages were radioed in to superiors we couldn't help but burst out laughing. Just as in daily life we shall always struggle, in revolt we take it as a St. Andrews tradition to always laugh.

However, the University management weren't laughing with us. At the gates of St. Salvator's Quad we remember your failed attempts to grab us and as we tackle our comrades out of your stinking arms its in our arms that they prevail. Outside the administrative buildings we will not forget your pathetic attempts at scaremongering us and threatening us, once more, with expulsion and punishment.

We finished the day by using a banner of the friendly Left Society, attached twine to it and hung it from a favourite tree of ours. It was fitting to end a day of confrontation with the University by displaying this encouraging message from the tree outside the library:

So, in short, authority makes us fearful, so we shall dress in black; the University ridicules us, so we fight them with humour; capitalism makes us poor, so we shall fight back. Anarchists, organise and fight back!