WYSF attended pickets, marches and rallies across the north, including: Hull, Leeds, Bradford, Newcastle and Middlesbrough. Thousands of workers and students took part. 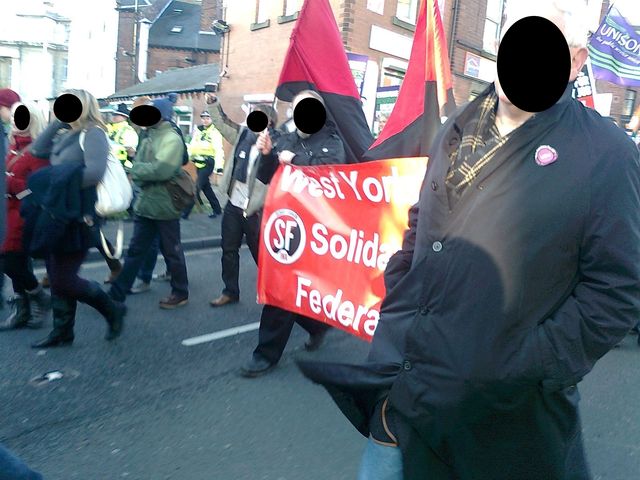 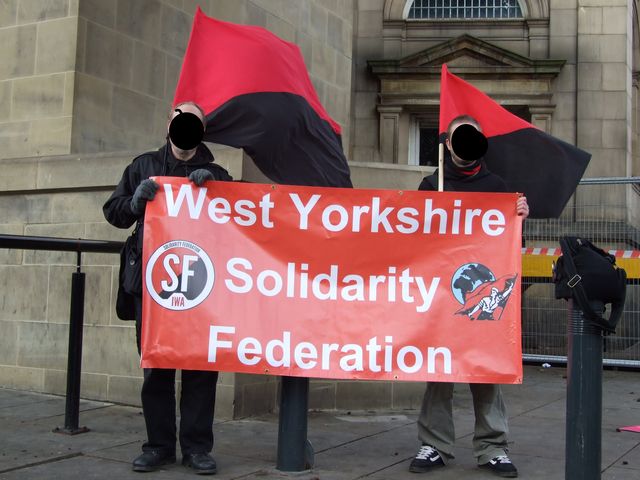 In Leeds WYSF joined a picket of a public sector building (name omitted to protect the individual member), before joining the march and demo. An estimated 10,000 took part, the biggest demo in Leeds in a long while. SF were joined by AF and quite a few people came up and took papers and expressed support for the Red and Black flags. Lots of support from the public and the march was “clapped” all the way into the city centre.

A prospective member from my course (today directly asked if he could join) who came on the N30 pickets and march will be attending our meeting this Sunday. Although previously a communist interested in Trotsky and Luxembourg, he seems to be moving toward Bakunin etc
Made a contact with an (ex?) IWW guy who seems interested. Even if he doesn't join he could be a useful contact.

Now on to a report of the day itself:

Spent the morning on a Hull university picket line with students and lecturers, flyered students about not crossing picket lines, turned away a number of delivery vans. Brought a red and black flag, which was excellent at providing a visible presence.

Then went down to city centre for a 'rally' (bureaucrats doing speeches), used this opportunity to hand out a tonne of Catalysts, and then after running out of papers, handing out more 'Don't cross picket lines'.

The march then set off and we realised what a massive turnout there was (the student turnout was also substantial … really felt like a crowd). We thought definitely 1000, although we also heard 4000 being bandied about.

Whilst the A-B march itself wasn't particularly fantastic, the turnout was incredible and everyone was really lively. Every now and then we stopped outside public sector workplaces and harassed the scabs. Police presence was pretty pronounced. Eventually ended up back in the city centre, had a nutter come and dance whilst holding our flag for a bit, had a drink and then went home.

Hi all, 5am start - I'm knackered! Picketed our gate, 2 cars drove in
so fast that a couple of pickets got bumped and a foot run over, no
one hurt. I had the idiotic idea of flagging a director down and
asking if he'd stand by the strikers - amused me mates but director
was laughing. 3 dozen on the picket and turned a few around. Very
successful and dished out the Don't Cross Picket Lines leaflet.
Went on to the march. We worked it out as being about 3000, but it was
a short march that terminated nowhere. We dished about 80 catalysts
out and then had enough.

11:30 at boro, quiet start....handed out a few catalysts.....by the time we marched several hundreds of people from all unions..........spoke to matt......richard knows matt..........marched a short distance to binns corner and listened to several speakers........spoke to several people interested in lib-com.......swp were there.....jeez they were young...i have hairs on my backside older than them.........peaceful and uneventful day