Why Clarkson's Comments Are No Laughing Matter

As you've probably heard by now, Jeremy Clarkson is in hot water this afternoon. Last night, following the biggest show of working class power in many people's lives, he straightfacedly told BBC's The One Show that striking public sector workers should be killed: 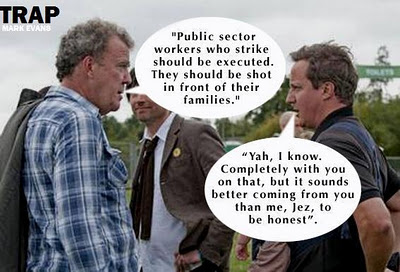 "I would have them all shot. I would take them outside and execute them in front of their families. I mean how dare they go on strike when they have these gilt-edged pensions that are going to be guaranteed, while the rest of us have to work for a living?"

Notwithstanding the obvious hypocrisy of these comments, coming from someone who's idea of "working for a living' is driving about in cars and occasionally writing drivel for Rupert Murdoch, they do set a dangerous precedent. As Deterriorial Support tweeted, the Top Gear presenter has "opened up the discourse of ritual slaughter as part of the class war."

No doubt Clarkson's defenders will claim that he was 'only joking', and indeed Jimmy Carr has already complained that "The largest public sector strikes in a generation" are being overshadowed by "a joke".

Carr had already Tweeted support for the strike, so he is partly concerned that the strike will be overshadowed by a celebrity controversy. But Carr is also worried that if Clarkson is hauled over the coals, his own 'it's only a joke' schtick will be weakened. Carr - like his friend Frankie Boyle - is a genuinely thoughtful comedian, who nevertheless often resorts to scapegoating of the vulnerable to get a cheap laugh.

As I wrote in a comment on the comedy evolution of Boyle:

"It's one thing to attack "political correctness" - the 'moral' norms of the establishment - but comedians have to go beyond this if they are going to make most of us laugh. Especially in these times of great economic crisis and naked political corruption, people increasingly want to see those at the top - rather than those scraping along the bottom - cut down to size."

The danger of Clarkson's 'joke' is made clear by the political context. The man is a friend of Prime Minister David Cameron, at a time when the latter is leading an unprecendented attack on working class living standards. Yesterday's strike is sure to be only one battle in an escalating class war. Just last week I wrote how the European appointment of financial placemen to government was:

"[...]another big step in the eventual abolition of bourgeois democracy. When the time comes, military and para-military forces from the far right will be used in an attempt to crush the fighting battalions of the working class."

Some politically confused, utterly misled people amongst the working class - members of the EDL for example - will doubtless be laughing at Clarkson's 'joke' right now. But let us not forget, shooting trade unionists and activists is not some outlandish idea plucked from Clarkson's brain - it does happen. It regularly happens in Colombia. One hundred years ago, Winston Churchill gave orders for the army to shoot striking Welsh miners. At the end of this October - police in the 'land of the free' shot rubber bullets at Occupy Oakland demonstrators, nearly killing a man. And just three weeks ago, Met Police Commander Simon Pountain threatened protesting students and electricians with rubber bullets.

This time, the BBC may be compelled to severely censure Clarkson, but his idea is now out there. It is an option 'on the table' - perhaps discounted for now, but still, it remains there until a time when the ruling class is more desperate to maintain its grip on society.