Report and photos from N30 in Wrexham

Hundreds of people took part in yesterday's N30 strike action in Wrexham. The turn-out in town was several times bigger than for J30 and many more than the organisers of the march and rally had expected. They had booked the Grove Park Theatre for after-march speeches and discussion, anticipating that it would be half empty. In the event, it was full to overflowing with angry workers and supporters of the day's strike action and of the broader fightback against government attacks on workers and the poor. 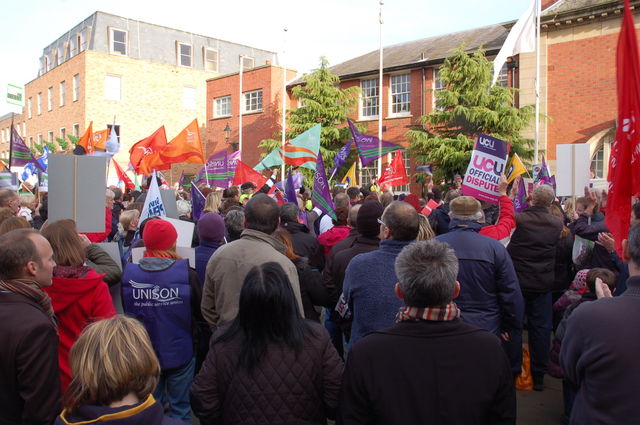 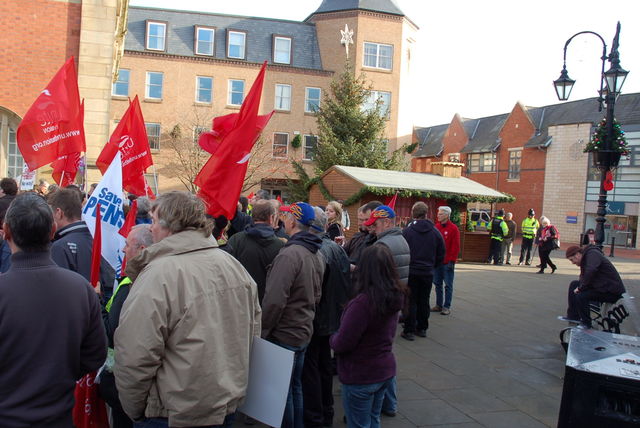 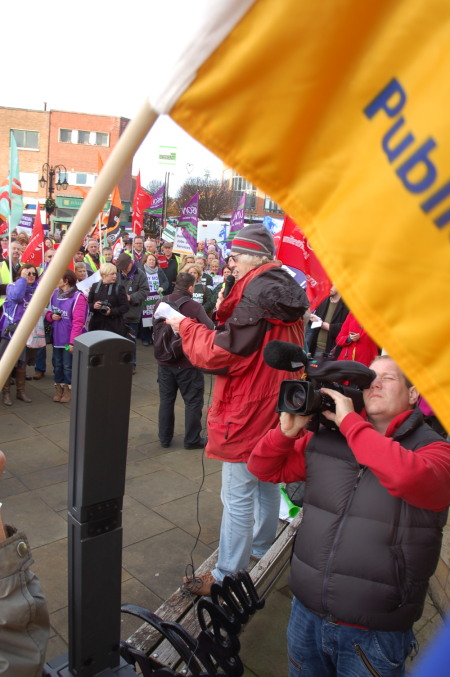 the media gets behind the unions 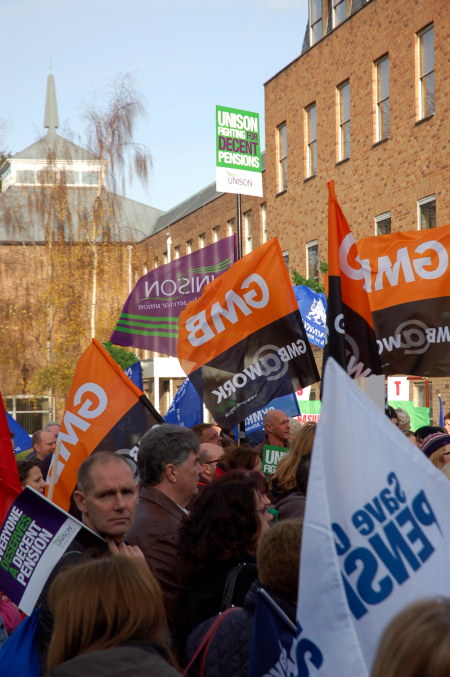 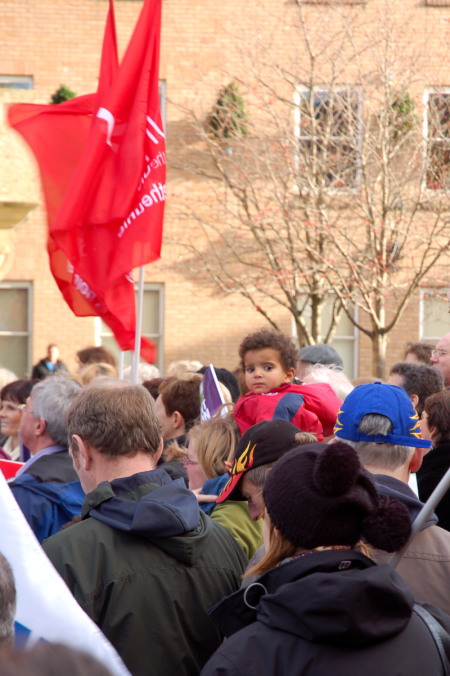 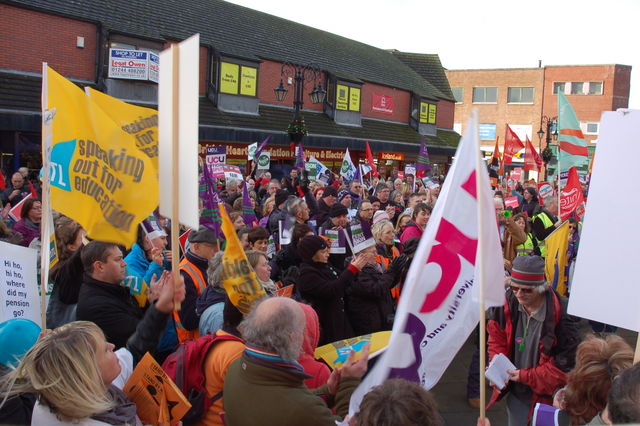 over the heads of the crowd 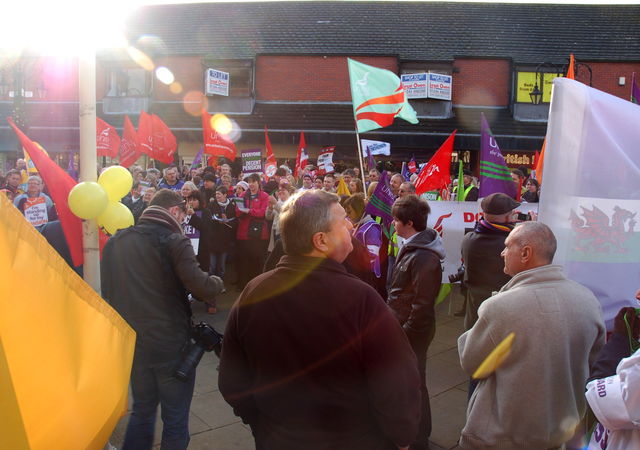 sunshine... a pleasant contrast to N29 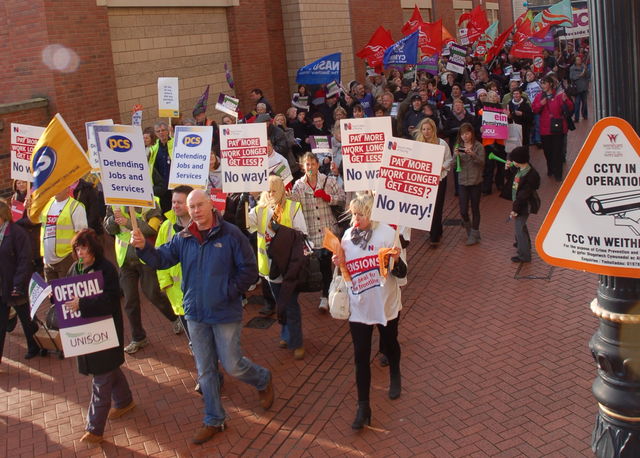 the march sets off 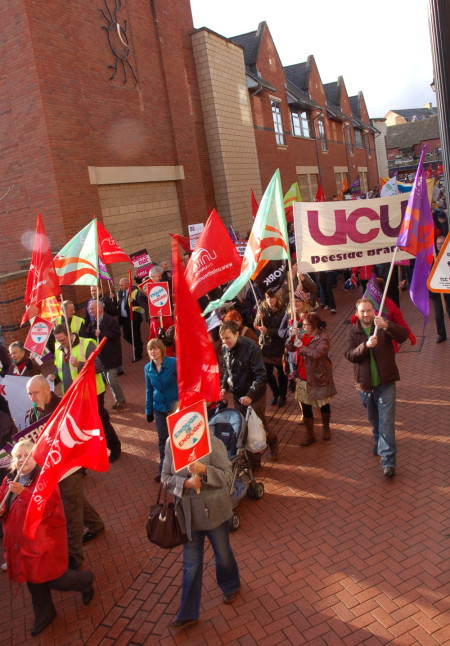 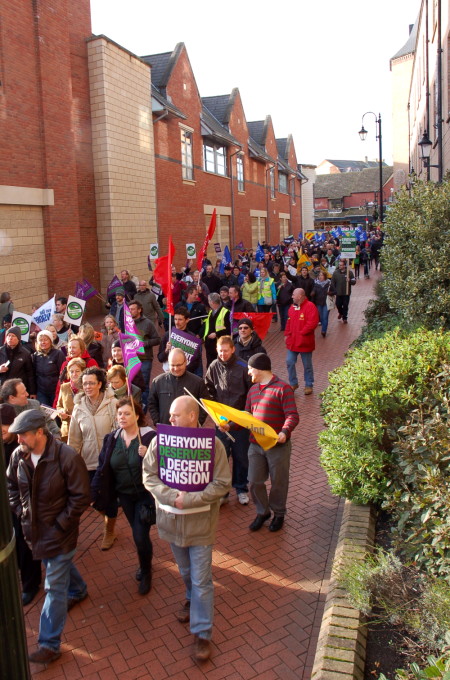 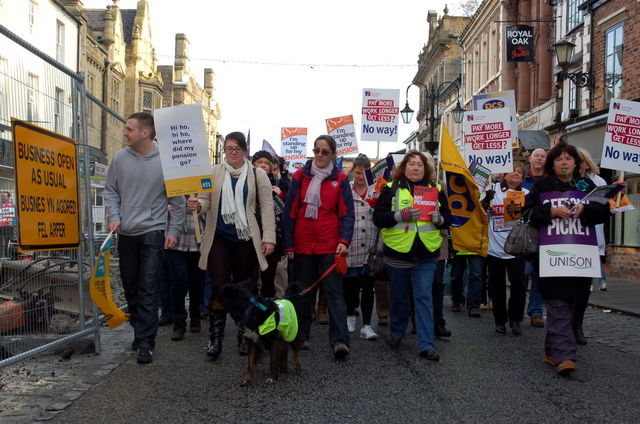 definitely not business as usual 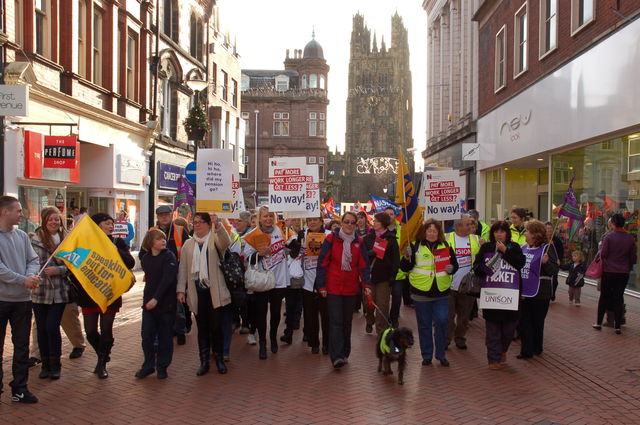 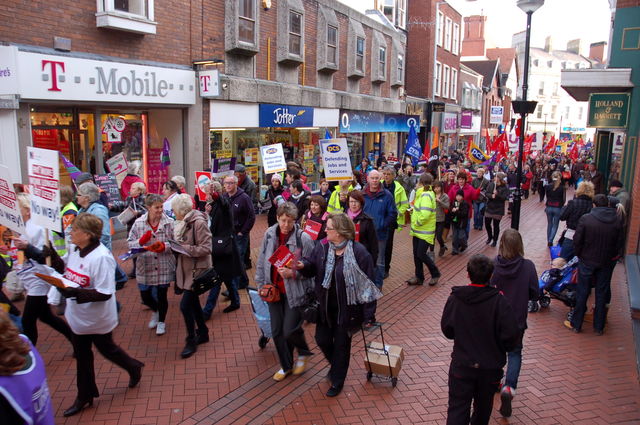 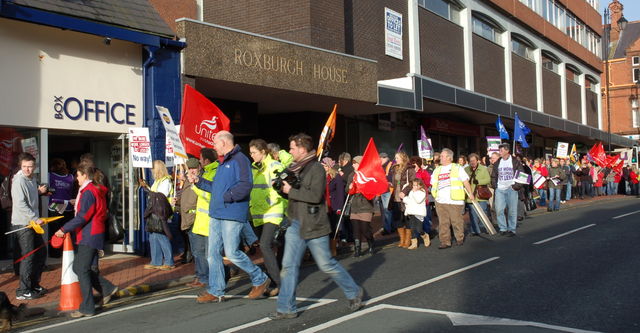 Almost all schools, libraries, leisure centres, the local college and other public services were closed for the day with pickets all over the place. Strikers converged on Queen's Square at 11.30am for a rally with speakers from the various unions.

As well as the ubiquitous 'Fair Pensions for All' leaflets, the individual unions handed out their own flyers, activists from Deeside handed out free copies of the Morning Star, while peace and justice activists pointed out the hypocrisy of supposed 'austerity cuts' on the one hand and endless spending on war on the other. Billions have been spent fuelling conflict in Iraq and Afghanistan as well as the billions spent on nuclear weapons ('Cut Trident, not jobs, eduction, health...') and the billions the government is committing to build a new generation of illegal, planet-threatening warheads. Flyers were distributed on local issues too, including the mismanagement of local 'umbrella' charity AVOW (Association of Voluntary Organisations in Wrexham) which receives large amounts of money from the public purse. For more information, see

After the rally, everyone marched through town and ended up at the Grove Park Theatre, where there were more speeches and a bit of feedback from the floor.

Jane Alton/Orton(?) of NASUWT called for fair pensions for all and said that government attempts to divide and rule by pitting those with private pensions against those with public pensions would fail. She pointed out that the average pension for a teacher is £10k a year and for all public sector workers a mere £5.6k. She said that her own pension would be very low, like those of many women teachers, because she had taken time out from teaching to bring up her children. The additional contributions, which many teachers simply cannot afford, are not going to go towards pensions at all, but to pay off the treasury deficit. She commented that the government's ideal was that teachers forced to work longer and paying more contributions would die in service and never collect their pensions.

Schoolteacher Gareth Lewis of ATL (the Association of Teachers and Lecturers) talked about the circumstances that had led his union to call for strike action for the first time on June 30 and how he had believed that this would be enough, but the offer was simply not good enough with three quarters of those affected having to work longer to receive less in the way of a pension. He seemed concerned to distance his union from 'gung-ho militants', saying that his union just wanted to negotiate and believe that just 'one more push' is needed to persuade the government to think again. He also condemned the effect of the change to retirement age that would force burnt out teachers to continue working until their late 60s.

Neil Foden of the NUT, a head teacher from Bangor (Gwynedd) referred to the misrepresentation and negative portrayal of strikers in the mainstream press, while the detrimental effects of the cuts on children's education go unreported. He also commented on the missing £46.4 billion from the government pension scheme. Started in 1923, the scheme has taken in £46.4 more than it's paid out over the years. It's been spent, and not on pensions.

David Williams of the RCN (Royal College of Nursing) said that the union had not balloted its members on this occasion but that all its members were fully behind the action and many had joined marches and demos around the country in solidarity with striking workers.

A community nurse from a learning disability team and a Unison member, spoke about how the cuts were affecting her service users in Wales, not just in education and social care but also their health needs, which are not being adequately met. Nurses themselves being expected to travel hundreds of miles a week across a hugely increased work area in their own cars with travel expenses frozen for years despite the increased cost of fuel and these not due to be reviewed until 2013.

Chris Auld? PCS member at the Ministry of Justice spoke of the effect of court closures across North Wales, redundancies, pay freeze and cuts to pensions. He said that the issue is wider than pensions - it is also about pay, terms and conditions.

Bernice Daly, a GMB member and TUC project worker, described how women will be disproportionately affected by the cuts. Two-thirds of public sector workers are women, so any cuts to public services will affect women more than men. Women are more likely to suffer poverty in old age, they provide the majority of unpaid care to sick and disabled family and friends (which often leads to poverty) and they are more likely to lose their jobs in a recession. Overall, the cuts will increase the inequalities that already exist between men and women.

Sue Fortune of Disabled People Against the Cuts spoke about the need for this to be a wider campaign than just pensions, arguing that solidarity between workers and disabled people is crucial. She pointed out that cuts across the board will affect all of us and that any workers could become disabled at any time. If it happens to you, you will need your entitlement to the share in that £5 billion the government's trying to cut by abolishing DLA and Incapacity Benefit.

Pam Stevens of UCU, a teacher at Deeside College in Flintshire, described how her students with learning disabilities were being affected by the cuts. Students travelling from addresses over the border in England have had their transport axed, sometimes with just a few days notice and could no longer afford to come to college without this support. Others were being forced to make choices between being supported at college and being supported in their leisure activities. A recent EHRC (Equalities and Human Rights Commission) inquiry studied the harassment of disabled people, including hate crime. Pam argued that cuts that limit disabled people's access to education and community services also amount to harassment and should be challenged as equality issues.

Liz ? from Unite thanked Wrexham Labour MP's wife Norah Lucas for joining the rally and march 'as a public worker herself.' A later speaker pointed out that Labour had done nothing in 13 years in office to reverse the Tories' anti-strike legislation.

Peter Jones of UCU commented that if there was an election today, MPs voted out would walk away with an annual pension of £48k, even after less than two years service, while the rest of us are expected to work for years with no guarantee of a good pension at the end.

A PCS representative from the DWP (Department for Work and Pensions) made some rather involved points in connection with the hymn 'Make me a channel of your peace' and its abuse by Maggie Thatcher on becoming prime minister.

He agreed with Benjamin Disraeli's famous quote: "A Conservative government is an organised hypocrisy": What could be more hypocritical than to preach fairness while making us pay for the scandalous gambling of fat cats?

The PCS worker from the MoJ said that there would be attempts to say that this strike of between 2 and 3 million people is insignificant, when the General Strike of 1926 involved less than 2 million workers. What he neglected to mention was that the 1926 strike lasted nine times as long and was ultimately sold out by the TUC. Towards the end of the meeting, Craig ?, a trades union activist for 40 years, commented on the need to build on the solidarity of N30, not to squander the gains made and not to allow union leaders to squander them.

Someone relayed a message from Unison General Secretary Dave Prentice, which was along the lines of:
"You have made history today. However our work doesn't stop today. When you go back to work you will be facing colleagues who didn't take action. The only way we can make a difference is to persuade those who didn't come out this time to join us."

90% of Unison members in Wrexham were reported to have joined the N30 strike.

Ben ? from Unison talked of our power as consumers as well as workers. He recommended a boycott of newspapers that favour the government and banks in their reporting (pretty much all of them then) and suggested withdrawing custom from high street banks that continue to reward those at the top with obscene bonuses.

In some closing remarks, Peter Jones of UCU, MC for the day, said that future strike action must be taken together in solidarity, not by individual unions at different times. He spoke of the need to strike more often and for longer periods, pointing out that one day strikes are not going to sway the government which simply doesn't care about workers, the poor and unemployed.

Someone commented that there was a need to further broaden the campaign, which is no ordinary industrial dispute.

Lots of talk of solidarity and building on the unity of today's action. A small group of those involved in organising this march and rally along with other interested parties met after the main meeting to talk about building a campaign to keep up the fight against a government which is intent on making it easier to fire people while making it even harder for workers to take cases to employment tribunals and to take strike action.

Reports and photos from J30: