Adele Goldie reports on Brisbane solidarity action for Julian Assange in the run-up to his hearing in the High Court in London on 5 December. 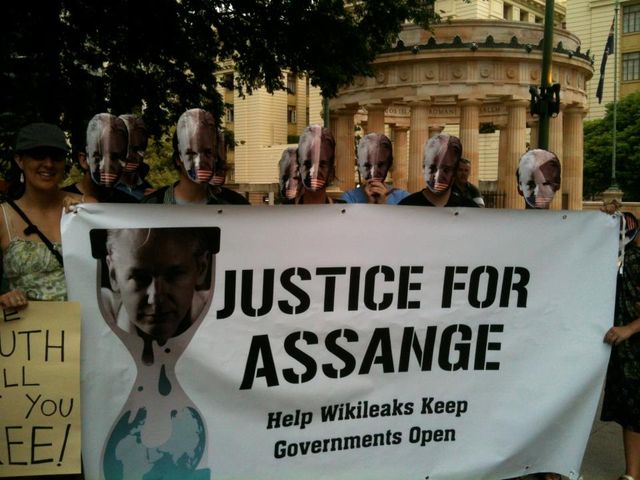 Picture from the rally on 25 November

RALLY IN BRISBANE FOR ASSANGE

I took part in a rally to show support for Australian WikiLeaks Editor-in-chief Julian Assange on November 25th. It was held in Brisbane outside the Department of Foreign Affairs. Approximately seventy people attended the rally. We were there to demand that the Federal Government publicly take action to protect Julian Assange from being rendered up to the United States.

APPEAL TO THE SUPREME COURT

On December 5th Julian Assange is appealing his extradition to Sweden.
There will be a solidarity vigil in London outside the Royal Courts of Justice on the Strand from 8.30am.

Sweden has a bilateral agreement with the US that would allow the US to take Assange without going through the traditional tests and means of extradition. A secret Grand Jury has been meeting in Virginia since December 2010 to bring charges against Assange and WikiLeaks. It is highly probable that the US is looking to charge Julian Assange under the Espionage Act which carries the death penalty.

Assange has not been charged with anything, he has been electronically tagged and held under house arrest in the UK for 355 days. He has been put through court proceedings to determine if he should be extradited to Sweden to face a secret court under alleged allegations of sexual misconduct.

The media have been having a fanfare labeling Assange. Even though the fact of the matter is that that the sex was consensual in all of the events. (One of the complainants, AA (Expressen, 21 August 2011), stated that both she and SW had consensual sex with Assange.)

CALL FOR SUPPORT FROM CHRISTINE ASSANGE

- Contacting their Member of Parliament and insist that the Government intervene in this case or they will withdraw their vote.
- Donating to WikiLeaks so they may continue publishing, fund Julian’s case and mount legal action to fight the banking blockade imposed on WikiLeaks.
- Staying informed about WikiLeaks through Twitter, WikiLeaks Central
- Keeping up to date via the website Sweden versus Assange.

http://www.swedenversusassange.com/
- Telling others of Julian’s plight, helping get the facts out there by ringing talk back radio, sending letters to the editor, sending the word out through social media or starting a local support group.