Aberdeen Against Austerity and Aberdeen Anarchists teamed up to visit as many picket lines as possible with hot tea and coffee, morning rowies, sandwiches and solidarity for the striking workers on N30. 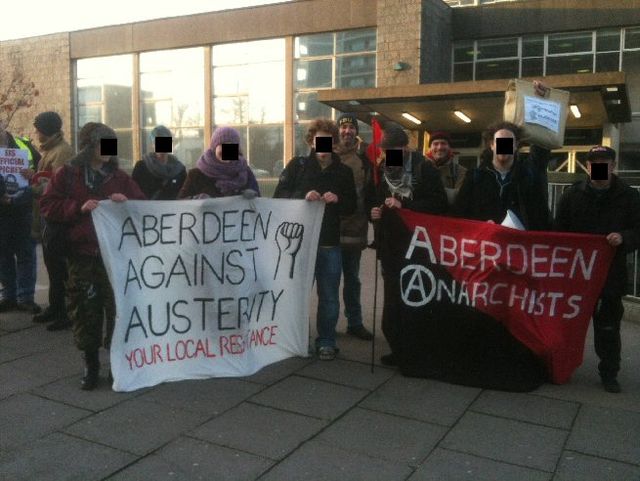 Aberdeen Against Austerity and Aberdeen Anarchists teamed up to visit as many picket lines as possible with hot tea and coffee, morning rowies, sandwiches and solidarity for the striking workers on N30.

We started early and visited our first picket lines at Aberdeen Royal
Infirmary, the Marine Lab and Kittybrewster Depot while other Super GO
Breakfast teams visited their local picket lines before our meet up at the town court house at 8am.

We spent the next few hours visiting as many picket lines as possible,
covering as many unions and places of work as we could. In total we
delivered breakfast for 22 picket lines where we were met with smiles and solidarity. People seemed really appreciative of our efforts which really made dragging our sorry bums out of bed at 6am very worthwhile. We even bumped into the Fire Brigade Union who were out doing the same.

We then met up with the Aberdeen Students currently in occupation at the university, to march with them down to the mass rally at the Castlegate(Aberdeen’s traditional place for agitation and rebellion.) It was fantastic to see the occupation going great guns and everyone working very well together. Anarchy in action, jazz hands and solidarity!

The turn out at the rally was very impressive, the biggest I’ve personally seen in Aberdeen since the poll tax days. There was a really good, noisy atmosphere with local speakers representing the unions, students and local community groups. The last speaker was a rep from Aberdeen Anarchists who gave the crowd a little giggle to keep them warm and to go home with.

The atmosphere in town is really positive just now which for Aberdeen is quite amazing. We have far too many people in the dirty oil trade, making too much money to ever get much support from the local press and the private sector. The N30 event has brought together good folks from the Unions, austerity groups, SWP, Anarchists, Students, pensioners and many others who are working together very well and who are determined to build on what we have done so far. We need to keep the solidarity going, stay active and visible and engage with other groups and the public as this is only the start.

Aberdeen Against Austerity and Aberdeen Anarchists would like to send
solidarity and big love to the all the good people from ATUC Council and Club, PCS, Unite, Unison, EIS, UCU, UCATT, GMB, ATL, RMT, SIPTU, CSP, Aspect, AEP, NAHT, AHDS, SWP, Occupy Aberdeen, Occupy Aberdeen University, Black Sheep Collective, everyone we met on the picket lines, anyone we have forgot to mention and to every single person in the UK who took action yesterday.